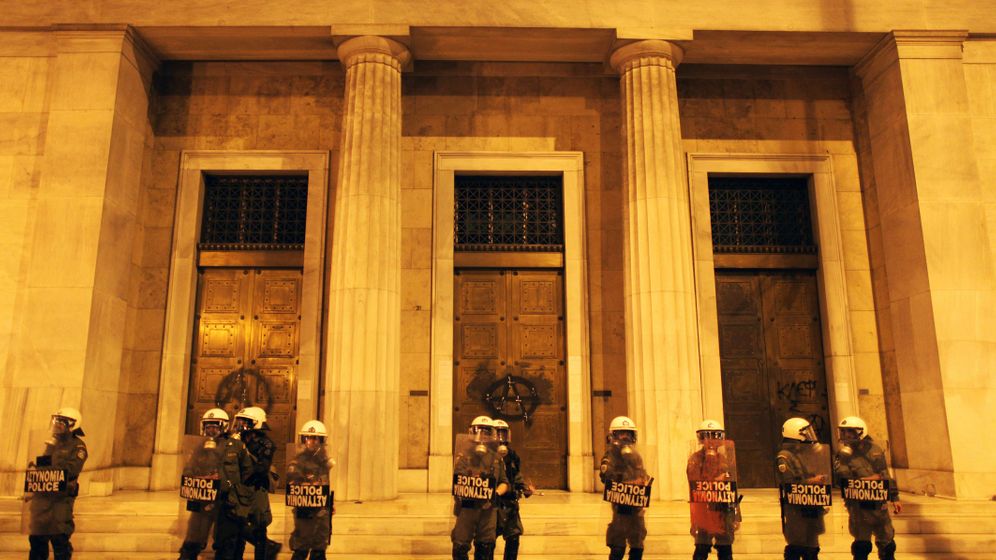 Wolfgang Schäuble looked pale. His face seemed drawn and his gray suit hung loosely over his thin shoulders. After spending eight weeks in the hospital for a wound from an earlier surgical procedure that had failed to heal properly, the German finance minister seemed tired and haggard.

It was the beginning of last week, and Schäuble was briefing the financial experts in Germany's coalition government of the center-right Christian Democrats (CDU/CSU) and the liberal Free Democratic Party (FDP) on the latest developments in the Greek crisis, which had been intensifying on a weekly basis for the last six months.

Schäuble informed the members of parliament that it had now been firmly established that Athens could apply for financial assistance from the International Monetary Fund (IMF) and the European Union. But, he added, there was still some time left. Schäuble predicted that it would take another two to three weeks before the Greeks officially submitted their request.

'Activation of the Support Mechanism'

He was wrong. Last Friday, Greek Prime Minister George Papandreou, standing in front of the picturesque backdrop of the Mediterranean island of Kastellorizo, announced that his country could no longer fend off the attacks of international financial speculators and had to solicit help from its European partners.

A short time later, a sparsely worded, four-line announcement by the Greek finance minister came fluttering out of fax machines in Brussels. In the notice, the Greeks requested "activation of the support mechanism."

Things could hardly have turned out any worse -- not for Greece, not for Europe and not for the German government.

For weeks, Chancellor Angela Merkel had promised citizens that she would only be disbursing German taxpayer money to Greece as a "last resort." And if the assistance did become necessary, Merkel said, trying to reassure the members of her own party, Greece was not expected to ask for help until mid-May. It was Merkel's way of keeping the sensitive issue out of the campaign for a key state election in North Rhine-Westphalia on May 9.

But now Athens' call for help has made it clear that Merkel's Greece strategy has failed completely. The European drama involving government debt and greedy speculators isn't sticking to national schedules. While the CDU/FDP state government in North Rhine-Westphalia worries about losing its majority, the chancellor faces unpleasant debates in Berlin.

Critics of the European common currency have already made it clear that they see the emergency aid for Greece as a violation of European treaties. They intend to file a new lawsuit before Germany's Federal Constitutional Court in Karlsruhe. CDU and FDP members of the Bundestag, Germany's parliament, caution against the development of a "European transfer union," something Merkel said she absolutely wanted to prevent.

Even within Merkel's administration, there are fears that Germany could end up footing much of the bill for a financial disaster. Experts in her cabinet suspect that many billions could seep away into Athens' morass of debt without even preventing the worst: a Greek bankruptcy and a new wave of speculation against the euro.

Not surprisingly, the mood is tense within the coalition government in Berlin. The CDU's Bavarian sister party, the Christian Social Union (CSU), is demanding that in case of doubt, Greece should leave the euro zone. The chancellor, for her part, is determined to at least create the impression of accommodating critics within her ranks.

Before the Greeks receive any money, Merkel demanded late last week, they would first have to tighten their belts even further. But is this even possible? Or would the country be stifling what is left of its battered economy by doing so? Can the Greeks ever pay off their massive mountain of debt, which has since grown to about €300 billion ($405 billion)?

It is also a question of Merkel's reputation and of the deep-seated fears of her fellow Germans. Merkel knows that concerns about inflation are more deeply rooted among Germans than almost any other European nation. Last week Finance Minister Schäuble experienced for himself just what instinctive reactions the subject can unleash in Germany.

On Tuesday, Schäuble tried to convince the senior leaders of the CDU/CSU parliamentary group to push the European pledge of financial assistance for Greece through the parliament in expedited proceedings. He proposed simply attaching the applicable regulations to an existing bill, so as to avoid cumbersome debates in the Bundestag.

But Schäuble's idea was met with fierce opposition from members of his own party, the CDU, and its sister party, the CSU. "Do we even know how solvent the Greeks are anymore?" CSU politicians asked. Members of the CDU also voiced concerns. Norbert Lammert, the president of the Bundestag, warned that the emergency aid was too important to be hastily whipped through the Bundestag. A proper law needs a second and third reading in front of members of parliament, Lammert argued.

Now that Greece has officially asked for help, Schäuble will have to try a new approach. On Monday of this week, the minister wants to meet with the floor leaders of the parties represented in the Bundestag in order to sound out ways to bring the Greece package through the parliament as quietly as possible.

The minister can hardly expect massive support -- reservations in the other parties are simply too substantial. In a letter to Merkel, Frank-Walter Steinmeier, the floor leader for the center-left Social Democratic Party (SPD), made it clear that "decisions on possible financial assistance for Greece are of fundamental importance for the future of the European Union." That's why, he wrote, "they have to be thoroughly discussed in the parliament and why responsible decisions are needed." Steinmeier added that Schäuble should get the applicable law "off the ground immediately, preferably this week."

The concerns are hardly any less significant in the coalition government. "Prosperity and social justice require a stable currency, but we aren't giving out any blank checks," said FDP leader Guido Westerwelle, speaking at a party convention Sunday. "Greece must get its own house in order for a start, and aid can only be given as last resort to protect our own currency." Several FDP Bundestag members also made clear last week that they had serious doubts about the bailout for Greece.

Senior CSU politician Hans-Peter Friedrich also expressed his reservations: "Greece doesn't just have a liquidity problem, but also a fundamental growth and structural problem." For this reason, he adds, the country should "seriously consider withdrawing from the euro zone." This step, says Friedrich, should not be declared a taboo.

What makes Friedrich's position so explosive is that some conservative members of the European Parliament share his views. One of them, Werner Langen, head of the CDU/CSU group in the European Parliament, is "extremely skeptical about whether the aid package is compliant with EU law and the German constitutional law." Langen believes the aid, worth billions, won't do the Greeks any good in the long term. "The real alternative," he says, is for "Greece to withdraw from the monetary union and make itself more competitive by imposing strict structural reforms."

Large segments of the professional world agree with the euroskeptics' criticism. Hardly any economists are convinced that the planned injection of billions from European and German coffers can fix Greece's malaise. Even worse, many critics doubt that the rescue funds pledged to date are sufficient.

The Greeks will need to borrow about €130 billion by the end of 2012, when the loans under the current EU package mature. However, politicians had assumed until now that the country's financial requirements would not exceed €80 billion. But that amount would only be enough until the end of 2011, which would mean that Greece would have to raise the rest of the money in the financial markets.

That will be difficult. Leading economists don't believe that the risk premium on Greek treasury bonds will decline simply because the EU is now pumping money in Athens' direction. As a result, interest rates on Greek bonds will remain high -- meaning the Greek state will have to shoulder a large financial burden.

The European Union must therefore encourage the country onto a path of consolidation and reform, says renowned economist Martin Hüfner, so that it can repay its debts in a few years. "If this doesn't happen, the returns on the outstanding bonds will only grow," he says.

Michael Heise, chief economist for the multinational insurance giant Allianz, agrees. "The EU's money will only help the Greeks in the short term" he says. "The key question is how the country will manage to get out (of debt)."

Two risk scenarios are currently making the rounds among economists. In the first scenario, Greece goes bankrupt and its loans are suspended, extended or restructured. In the second scenario, the country is forced to withdraw from the euro zone, enact a currency reform and hazard an economic new beginning. In both cases, large portions of the European bailout money would be lost.

Parallels are already being drawn to another historical showdown between governments and speculators in the early 1990s. At the time, hedge fund entrepreneur George Soros forced the Bank of England to its knees, and the British pound had to withdraw from the European currency system in place at the time.

The same scenario could unfold this time, even though the Greeks, after their spectacular call for help last Friday, are spreading hope again.

Athens economist Yannis Stounaras, for example, calls it a "correct and unavoidable decision." Industry leader Dimitris Daskalopoulos sees the program as "Greek's last chance," and says that the country should not interpret the European requirements "as a penalty," but must see them "as necessary therapy."

Since last Wednesday, experts from the IMF, the European Central Bank and the European Commission have been at the Finance Ministry in Athens, combing through budgets, balancing receivables against outstanding obligations and appraising the effects of the austerity program on the Greek government. It is considered highly likely that they will encounter the occasional surprise. The tip of the mountain of debt, say insiders, probably hasn't been discovered yet.

Only last week, the EU statistics agency, Eurostat, said that Greece's budget deficit in 2009 was 13.6 percent and not 12.7 percent, as previously estimated. This puts the Greeks almost on a par with Europe's deficit record holder, Ireland. And there is still no end in sight to the constant stream of bad news.

Eurostat has already informed Greek Finance Minister George Papaconstantinou about the additional "reservations" it has about his figures, which predict that last year's deficit could increase by another 0.3 to 0.5 percentage points. When that happens, it will be very difficult for the Greeks to stick to the promised consolidation program.

And if economic growth suffers too heavily under the rigid austerity measures, which is to be feared, the plans will not work out at all, says prominent German economist Hans-Werner Sinn.

"Greece is practically bankrupt," says Sinn, who is head of the Munich-based Ifo Institute. The consequences, he says, will put the rescuers "under pressure" sooner or later, possibly even including Germany, which is supposedly so solvent. "We already have a debt ratio of 73 percent," Sinn warns. "We're on a slippery slope, and it will only get slipperier." 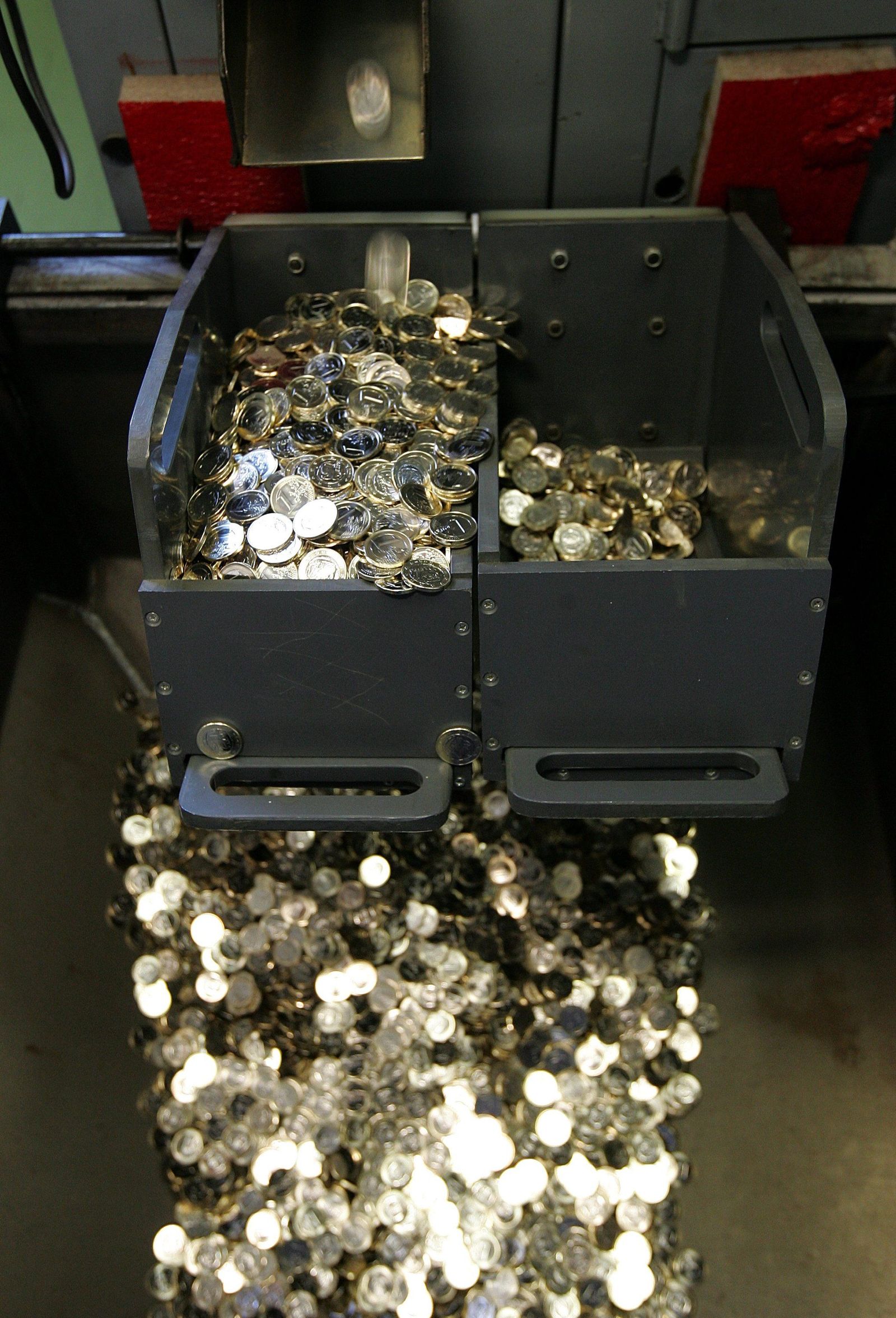 A machine at the Greek National Mint produces one-euro coins. "Prosperity and social justice require a stable currency, but we aren't giving out any blank checks," said German Foreign Minister and FDP leader Guido Westerwelle on Sunday. "Greece must get its own house in order for a start, and aid can only be given as a last resort to protect our own currency."