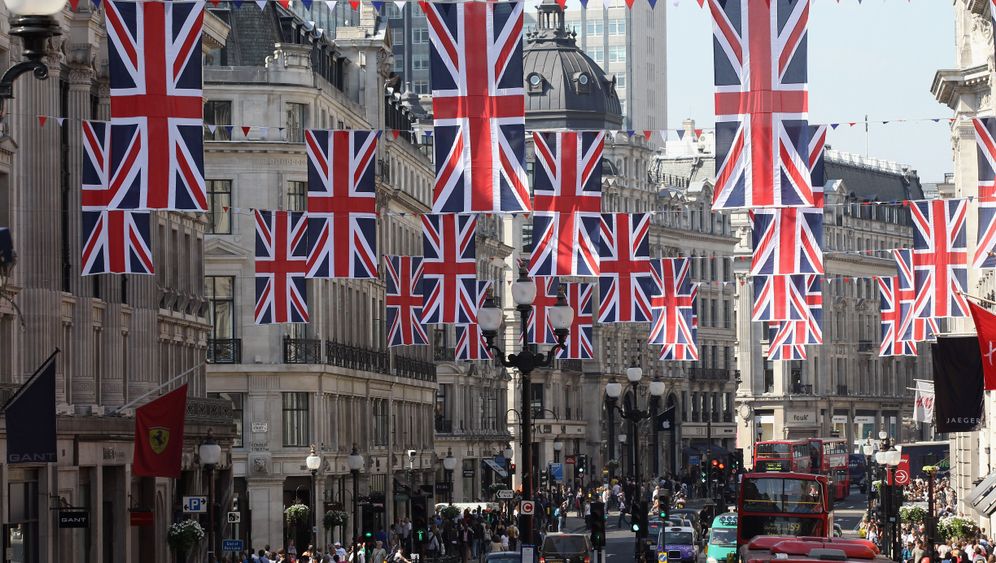 "No, I'm not going to put myself through that," says Frances, a 46-year-old sculptress who lives next to Clapham Common in south London, where the wedding of Prince William and Kate Middleton will be broadcast on giant video screens on April 29. A huge tent camp for 4,000 people is being erected in the park. The organizers are calling it Camp Royale.

Frances plans to leave the city and spend the weekend with a friend. "I want to get as far away as possible. I won't switch the TV on either."

The artist is not alone in her aversion to the royal event. When Kate and William ride along crowd-thronged streets in a horse-drawn carriage from Westminster Abbey to Buckingham Palace, many Britons won't be watching. In a survey carried out last month by the ICM polling institute, 79 percent of respondents said they were "largely indifferent" or "couldn't care less" about the event.

In fact, thousands will be leaving the country to flee the frenzy. Tour operators reported record bookings for the days around the wedding -- two-thirds more than a year ago. That is largely because of the timing of Easter and the May bank holiday this year which means people will only have to take three days off work to get an 11-day vacation. The wedding day itself has also been declared a public holiday. But many of the travelers will be leaving Britain's shores because they can't stand the wedding hype.

Paul Furner, boss of TravelRepublic.co.uk, said: "Sales are up by an astonishing 59.3 percent over the same period last year. The run of bank holidays and the fact that the royal wedding is being screened and celebrated in lots of places outside the United Kingdom, has been too much to resist." But he added: "We are also seeing strong demand from those wanting to escape the celebrations completely."

Holiday company Release Travel has been trying to lure men to a surf lodge in Cornwall for what it calls a "Royal Wedding Getaway."

'Are We Really Bothered about the Royal Wedding?'

It website says: "Let's be honest lads - are we really bothered about the Royal Wedding? No doubt the girls will be harping on about it for the next few months so we have compiled all the best bits that Newquay has to offer you to give you a weekend to remember which has nothing to do with Wills & Kate."

Young Britons in particular are indifferent about the wedding. "I won't watch it," said Tim, a 40-year-old accountant from Clapham. "The royals are boring. They're part of celebrity culture." Camila Prada, a designer, complained about the chasm between the media hype and the attitude she and her friends have to the marriage. While the press is pouncing on even the most trivial wedding tidbits to splash Kate or William on the front page, no one she knows cares about the wedding, said Prada, who is her mid-30s and lives in the town of Stoke-on-Trent in the West Midlands.

As a form of protest, Prada designed a tea mug that says: "I Couldn't Care Less About the Royal Wedding." She is finding it hard to keep up with demand. The mug isn't intended as a criticism of the royal family, but of the media, she says. "The reporting is totally divorced from reality."

Many Londoners are woefully uninformed about the imminent nuptials. "When is it?" says Lisa, a 31-year-old executive. "Oh, I'm moving house that day." The monarchy belongs to another age, says David Murphy, 23, from Ireland. "Kate and William seem OK but they should just have a normal wedding."

There are, of course, many Britons who have marked the day in their diary for months and who are looking forward to it. Some 4,000 street parties are being planned up and down the country. It's an old British tradition -- whole neighborhoods put out a line of tables and chairs in the street, hang up Union Jacks and have a barbecue. Prime Minister David Cameron will be joining in the celebrations and hosting a barbecue in Downing Street.

Charles and Di Wedding Was Bigger

But the mood isn't the same as it was 30 years ago when Prince Charles married Diana, says Dennis Michael, a 45-year-old taxi driver. On that sunny day in 1981, he says, most streets staged parties. There will be far fewer on April 29. And young people aren't interested, he said. His teenage children have better things to do than watch the wedding.

Anti-monarchists of the "Republic" group will be staging a "Not the Royal Wedding" alternative street party in central London. They want to counter the royal hysteria without being labelled as spoilsports.

"We've taken a 'traditional' royalist street party as our inspiration, but there will be one key difference -- we'll be celebrating democracy and people-power rather than inherited privilege," the organization says on its website. "Republic's alternative street party is sure to be a fun day out. But there will also be a very serious message -- Britain's 10 million republicans won't be ignored, and we certainly won't be hiding."

The novelist Will Self told London's Guardian newspaper that a friend had invited him to a "Fuck the Royal Wedding" party. "I might mosey along to that. But my lack of interest in the public beanfest that is the royal wedding is so great that even a Fuck the Royal Wedding party might be a bit much for me," says Self. "It's quite good just to be outside in the park, because when these sorts of events are happening, public spaces tend to be drained of people."

The anti-royalists of Republic may deplore the national wedding frenzy, but they have benefited from it it one respect: Since the wedding was announced, its membership has increased by 50 percent.