For the European Union, Jan. 1 2014 is going to be a potentially charged day. It's the day that Romanians and Bulgarians will be given free, unlimited access to the European labor market. Both countries have been full members of the EU since 2007, but under the terms of accession, they were not to be given full freedom of labor movement for a transitional period of seven years. With this last barrier scheduled to fall in less than a year, a major, pan-European debate on immigration is now unfolding.

The mood is particularly tense in Great Britain. Next week, a by-election is taking place in Eastleigh for an empty seat in the House of Commons, and the governing Tories have markedly ratcheted up their rhetoric against what they have dubbed "welfare tourism."

"We're not tough enough right now about people coming from the other side of the world who decide to use our health service," Prime Minister David Cameron recently stated. "They haven't contributed in their taxes. They should pay when they use the NHS," the National Health System. And British Work and Pensions Secretary Iain Duncan Smith has thundered against other Europeans who "use the free movement rules just to travel around, looking for the best benefits they can get."

The rhetoric is a response to pressure from the country's tabloid press. Newspapers like the Sun and other tabloids are currently feeding fears of a flood of poor immigrants from southeast Europe. "So here we stand, staring at the oncoming train, but … utterly impotent," an article in the Daily Mail stated. With this "potentially huge political and social disaster hurtling down the tracks," the paper warned, Cameron and his government are standing, "frozen in the headlamps, waiting for the crash in January." The story is accompanied by a photo of a group of downtrodden Roma standing in front of a dumpster.

Cameron has already announced his intention to cap social services for immigrants to Britain from other EU countries. A high-ranking working group at 10 Downing Street is currently working on proposals to make this happen. Among the measures being considered is a plan to apply fees to newcomers for a national healthcare system in Britain that is currently free. But other ideas, like the briefly considered notion of creating an advertising campaign in Bulgaria and Romania that would discourage potential immigrants from making their way to England, have been scrapped.

Britain isn't the only EU country where politicians are raising the alarm. In France, the extreme right has taken up the issue in an attempt to mobilize voters. After the Socialist Party government of President Francois Hollande moved in autumn to expand the number of fields in which Romanians and Bulgarians are permitted to work within in the country, from 150 to 291, Marine Le Pen of the Front National (FN) party described the move as a "scandalous decision, especially given that France is already suffering from mass unemployment."

Given a high unemployment rate that may reach a record 10 percent by mid-year, unions are also eyeing with suspicion the arrival of potential labor-market competition from the east. The government itself is divided on the issue. The French Senate, with votes from the Socialists and the opposition, squashed a motion by the Green Party to eliminate the restrictions earlier than planned, in autumn.

Meanwhile, in Germany the debate is being carried out under the slogan "poverty immigration." In a report released last month, the German Association of Cities wrote that municipalities are no longer capable of addressing issues related to the growing number of immigrants on their own. Association President Christian Ude is calling for additional financial support from the federal government. "If countermeasures aren't finally taken, then the situation is going to intensify come Jan. 1, 2014," Guntram Schneider, the labor minister for the populous western state of North Rhine-Westphalia warned in the Frankfurter Allgemeine Sonntagszeitung newspaper.

But there's a lot to suggest that the removal of the last remaining labor market barriers will not change the situation considerably. At Germany's Labor Ministry, officials are fond of pointing to the experience of lifting labor market restrictions for citizens in neighboring Poland. At the beginning of 2012, Polish nationals were given unrestricted access to the EU labor market, but there was no sudden flood of immigration. Most of the Poles who wanted to immigrate to other countries already had.

The fixation with 2014 ignores the fact that many Romanians and Bulgarians are already permitted to work in Germany. In addition to academics, this also applies to skilled workers and job trainees. And any Romanian or Bulgarian has the right to set up his or her own business in Germany or work as a freelancer. The sole remaining labor market barrier applies only to unskilled workers; currently they can only enter the country for six months at a time as seasonal workers.

A similar gradual transition is also taking place in France. Since last autumn, most employment sectors have been open to the southeastern Europeans. Highly bureacratic procedures for obtaining a work permit have also been simplified. All a Romanian or Bulgarian worker has to do in France today is to pay a €700 tax and obtain permission from the local municipality. These steps are intended to make integration simpler for the new immigrants.

A Debate over Integration Costs

As such, those Romanians and Bulgarians looking to leave home for Western Europe have had that possibility open to them -- and many have taken advantage of it. More than 1 million Romanians currently work in Italy; in Spain there are 900,000. Linguistic similarities have made those two countries the favored destination of Romanians. According to the Federal Office for Migration and Refugees, there are 209,000 Romanians and 121,000 Bulgarians currently living in Germany. How many of those are Roma is not documented. Thousands of additional immigrants from southeastern Europe arrive every month, with some cities reporting a six-fold increase since the two countries became EU members.

The migration will continue for as long as there is a lack of jobs and career opportunities in the two countries. But the governments in Bucharest and Sofia are warning against scaremongering. The debate in Britain in particular has been met with incomprehension. "Most (Bulgarians) who sought jobs in Britain have already done so," Bulgarian Ambassador to London Konstantin Dimitrov told the Evening Standard last week, discounting fears that a flood of his countrymen would show up in the United Kingdom in 2014. He added that "some politicians have been guilty of unenlightened propaganda."

The conflict is reminiscent of the immigration debate which erupted in Germany when the EU was expanded eastwards in 2004. The cliché of the "Polish plumber" who would drive German tradesmen into bankruptcy ultimately became a symbol for virulent xenophobia. Warsaw was able to successfully co-opt the fear in a humorous advertising campaign using a muscle-bound plumber to encourage foreign firms to invest in the country.

In Germany, the current discussion centers around who should be liable for the costs of integrating the newcomers. Romanian and Bulgarian immigrants are not, on average, unemployed more often than other Eastern Europeans. But Roma present schools, municipalities and charitable organizations with unique challenges. Local governments are complaining that they are now being made to bear the costs of EU expansion, concerns that the federal government in Berlin have thus far ignored. Instead, Interior Minister Hans-Peter Friedrich has demanded that the EU make money available for the integration of Roma into their native countries. 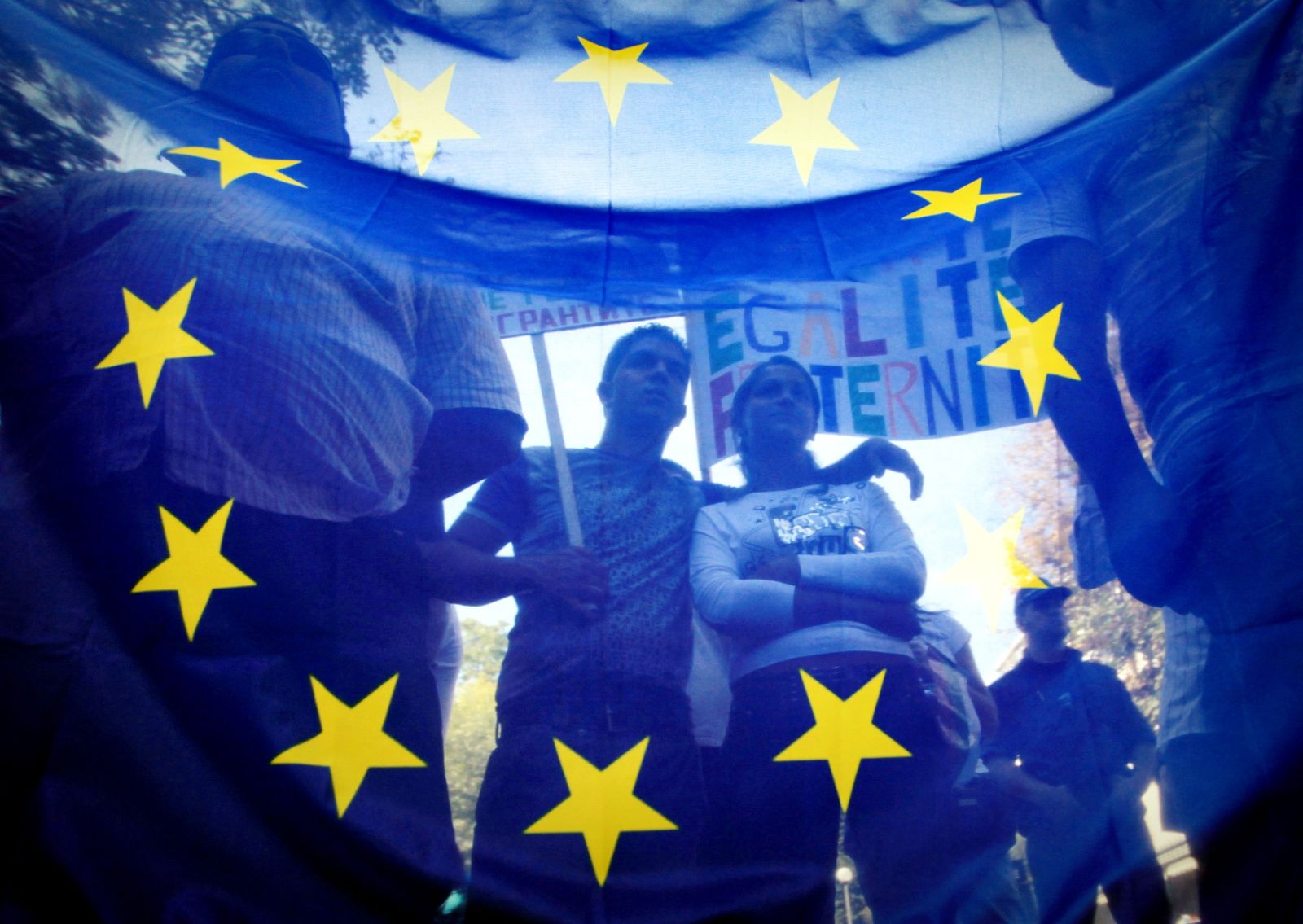 Roma in Bulgaria protesting in front of the French Embassy in Sofia in 2010.