Communications between the suspected top spy and his commanding officer seemed like a throwback to the Cold War. Investigators allege that in order to send messages to his Russian contact, Herman Simm, 61, used a converted radio which looked like a relic from yesteryear's world of consumer electronics. But there was nothing old-fashioned about what Simm, a high-ranking official in the Estonian Defense Ministry in Tallinn, reportedly transmitted to Moscow over the years. It was the very latest intelligence information.

Although Simm was arrested with his wife Heete in the Estonian capital Tallinn on Sept. 21, this spy story -- which has been largely kept under wraps until now -- primarily concerns the European Union and NATO based in faraway Brussels. Since Simm was responsible for dealing with classified information in Tallinn, he had access to nearly all documents exchanged within the EU and NATO. Officials who are familiar with the case assume that "virtually everything" that circulates between EU member states was passed on to the Russian Foreign Intelligence Service, the SVR -- including confidential analyses by NATO on the Kosovo crisis, the war in Georgia and even the missile defense program. Investigators believe that Simm was a "big fish." 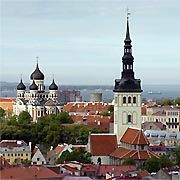 Estonian capital city Tallinn: For the former Soviet state, the scandal has become the downside of a political success story.

Meanwhile, a number of investigative teams from the EU and NATO have flown to Tallinn to probe the extent of the intelligence disaster. The investigation is being led by the NATO Office for Security, which is headed by an American official. As investigators pursue their work, they continue to unearth mounting evidence pointing to the enormity of the betrayal. A German government official has called the situation a "catastrophe," and Jaanus Rahumägi, a member of Estonia's national parliament who heads the parliamentary oversight committee for the government security agency, fears "historic damage."

NATO officials in Brussels are comparing Simm's alleged spying to the case of Aldrich Ames, a former CIA agent who for years funneled information to the Russian intelligence service, the KGB. However, the extensive fallout of the Estonian leaks makes this the worst espionage scandal since the end of the Cold War.

The case reveals how vulnerable the alliance has become in the wake of the expansion of NATO and the EU into Eastern Europe. When the decision was made to allow Estonia -- a tiny country with a population of only 1.3 million -- and six other countries into NATO and the EU in 2004, then-German Defense Minister Peter Struck of the left-leaning Social Democrats (SPD) expressed delight with this "great step on the way toward an undivided and free Europe, toward more security" and toward "a stronger NATO."

In Tallinn the downside of this political success story is now rearing its ugly head. Within the alliance, Estonia is not treated much differently than Italy or Germany when it comes to sensitive information. For a large power like Russia, which has always more or less rejected NATO and observed the expansion of the EU with suspicion, taking a slight detour through the Baltic States was the perfect way to reach into the heart of Brussels with a reasonably low level of risk. Thanks to Simm's alleged help, the Russians apparently achieved this with ease.

Investigators now assume that Simm established contact with the Russian intelligence service as early as the late 1980s. At the time, Estonia was striving for independence and it was clear that Moscow would eventually lose the Baltic Republics. Now was the time for Russia to secure its influence. When Estonia's NATO membership was first discussed "in the mid-1990s, Simm was officially recruited by the Russian government," claims Rahumägi. There is evidence indicating that the relationship was fairly loose to begin with. It's possible the KGB successor organization, the SVR, kept Simm as a "sleeper."

Simm rapidly advanced through the ranks, and in 1994 he became the Estonian chief of police. Later, he was transferred as a department head to the Defense Ministry, where he was responsible for the secret coordination with NATO and the EU. After Tallinn joined the EU in 2004, his position became tremendously valuable to Moscow. 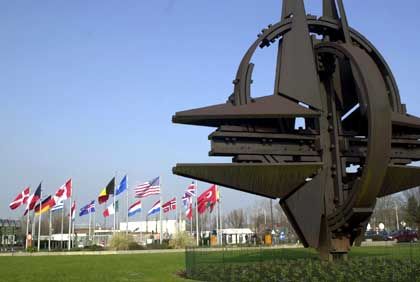 NATO headquarters in Brussels: The worst espionage scandal since the end of the Cold War.

It remains to be seen whether money was a motive for Simm's alleged actions. What is clear, however, is that the high-ranking ministerial official from Tallinn owns half a dozen plots of land and properties, including a farm near the Baltic coast and a lavishly renovated, whitewashed residence in the small city of Saue near Tallinn. Investigators began to observe this house when an increasing number of clues about the Simm's alleged contact man started to surface. The contact man is believed to be an SVR agent traveling around European on a fake Spanish passport. Meanwhile, officials at the Estonian Public Prosecutor's Office are hoping to press charges against Simm in early 2009.

Right now, NATO is extremely interested in "deciphering the Russians' game plan," sources in Brussels say. Later, though, the case is expected to result in far-reaching changes in the manner in which classified material is handled within the alliance. A comprehensive probe to seek further leaks in Eastern Europe is also expected.

"We have to assume," says a Brussels official, "that the Russian intelligence apparatus maintains a number of Simms in the Baltic States."