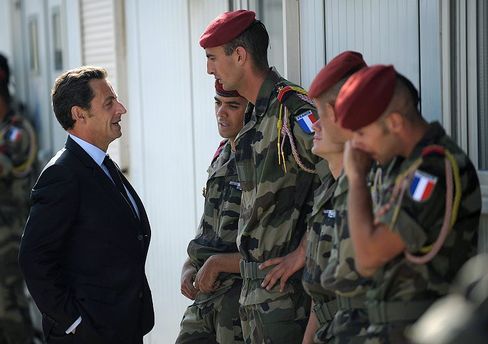 With news sinking in on Wednesday that France suffered its biggest military loss of life in 25 years, the political opposition in Paris is demanding a rethink of the country's mission in Afghanistan.

French President Nicolas Sarkozy rushed to Afghanistan and visited his country's troops on Wednesday morning in a show of support after 10 of their comrades were killed and 21 injured during an ambush on Monday and in fierce fighting that continued into Tuesday. France has about 2,600 soldiers stationed in Afghanistan, and Sarkozy said they must remain there.

"France is resolved to pursue the fight against terrorism, for democracy and liberty," Sarkozy said. "I don't have any doubt about that. We have to be here."

Monday's attack marked the worst single loss of life in combat for international forces in Afghanistan since the overthrow of the Taliban in 2001. The ambush came only months after Sarkozy agreed to send 700 additional troops to the war-torn country at a NATO summit in April. The decision proved deeply unpopular at home, prompting the left-wing opposition to file a motion of no confidence in the government's decision to beef up its presence in Afghanistan.

While the opposition Socialist Party (PS) has been careful to express its condolences to the families of those killed, it has also questioned the objectives of France's mission in Afghanistan. The national debate in France appears to mirror recent discussions in Berlin about the German Bundeswehr's mandate in Afghanistan, where polls show most opposing the military's mission.

"What Are the Aims of this War?"

On Tuesday, Socialist Party leader Francois Hollande called for an urgent meeting of the parliamentary foreign affairs and defense committees to be held in order to obtain clarification on the nature of the French presence in Afghanistan. "What are the aims of this war?" he asked in a statement. "And how many troops do we need to achieve those objectives?"

In an interview with radio station France Info, Hollande said it was time to "redefine the mission and decide on precise objectives." He added, "It is the Afghans themselves who need to provide security for Afghans and not an operation of occupation."

Other opposition parties also voiced deep-seated criticism of the French mission. Nöel Mamere of the Green Party said "France should renounce this adventure," while the French Communist Party reiterated its calls to pull the troops out of Afghanistan.

"Our soldiers should not get themselves killed for Uncle Sam," Jean-Marie Le Pen, head of the right-wing populist National Front, said in a statement released on Tuesday. "They died in an endless war that the United States is waging in this country in its own interests."

But representatives of Sarkozy's conservative ruling party, the Union for a Popular Movement (UMP), defended the deployment of French troops. UMP General Secretary Patrick Devedjian lashed out at the political sniping, warning against "using the deaths of the soldiers to launch polemics." He said this would just be "falling into the trap of Taliban who want to shake our resolve with their recent spectacular action." Meanwhile, UMP spokesperson Dominique Paillé expressed his "consternation" at the reaction of the opposition Socialists. "At this time of suffering, it seems to us that national unity in the face of the terrorism that threatens us should prevail."

During his visit to Afghanistan, Sarkozy tried to stiffen his troops' resolve. "The best way of remaining faithful to your comrades is to continue the work, to lift your heads, to be professional," he told soldiers at a base on the outskirts of Kabul. "A part of the world's freedom is at stake here," he said, adding: "This is where the fight against terrorism is being waged." Commenting on his decision to increase troop numbers following US pleas for its NATO allies to do more in Afghanistan, the president said "if it had to be done again, I would do it."

Sarkozy also met with Michel Stollsteiner, the French general who heads ISAF troops in Kabul and surrounding areas, and Afghan President Hamid Karzai during his trip to Kabul on Wednesday.

Karzai said he wanted to express the "condolences and the pain of the Afghan people to the French people for the loss they have suffered." He added that the "rise in violence is attributed directly to our lack of attention, the allies and us, to the sanctuaries, to the training grounds, to the financial resources, of terrorists and the Taliban. ... Unless we do that we will continue to suffer."

The 10 French soldiers were killed in a major 13-hour battle that occured in the district of Sarboi, some 50 kilometers from Kabul. Around 100 Taliban insurgents attacked a small group of soldiers who had been sent on foot ahead of a convoy of around 100 soldiers to check the terrain. The head of the French army, Gen. Jean-Louis Georgelin, described it as a "classic ambush." It was the single worst incident to befall the French military since 58 paratroopers were killed by a suicide bomber in Lebanon in 1983.

The French Defense Ministry has been quick to emphasize that the soldiers killed in the deadly ambush were not among the extra 700 soldiers sent to Afghanistan by Sarkozy this summer.

French left-leaning daily Libération wrote on Wednesday that the presidential staff estimates that this means the "worst has been avoided." "The worst would have been if this ambush had occured in Kapissa, a few kilometers to the north. That is where Nicolas Sarkozy sent a contingent of 700 men, placed under American command."

Meanwhile, conservative Le Monde wrote, "The attack on the French contingent  will be a disappointment for the Elysee (a reference to Sarkozy's office, the French White House). Since the spring, the risk that the military was running in this Eastern zone, where the jihadists are regrouping, was both anticipated and feared."

Libération concluded: "From now on France will not be able to ignore the fact that it is at war 5,000 kilometers (3,1000 miles) from its borders."