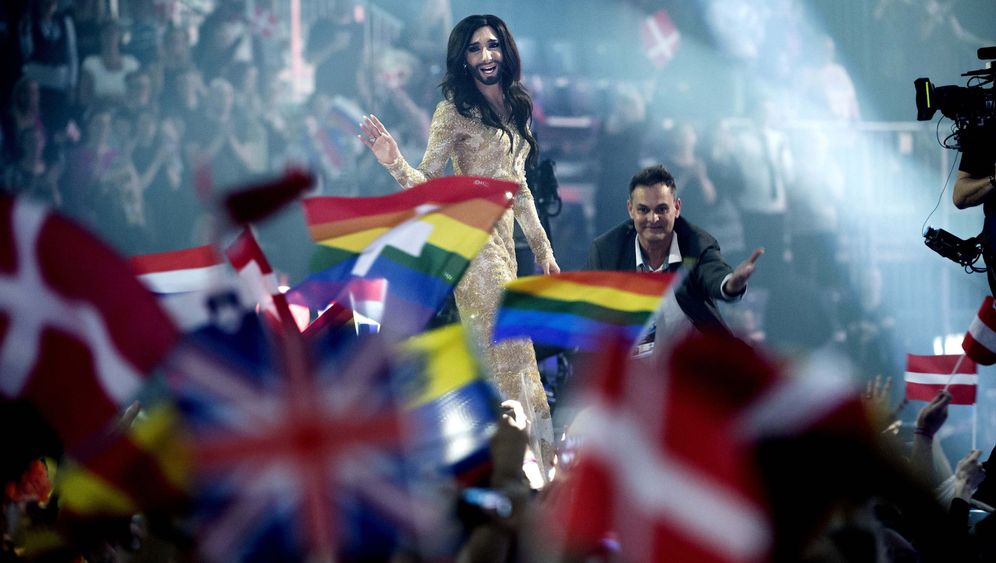 In the new "Muppets" film, Europe is portrayed as a hodgepodge of clichés, including the snobbish French Interpol agent who, despite having plenty of work to do, goes on an eight-week summer vacation. Or the sexy Siberian bride who wants to lock Kermit the Frog up in a gulag forever.

Is Europe a place caught between decadence and totalitarianism the way it is portrayed in the new Disney film?

Or is this a tolerant Europe, one in which an Austrian drag queen can win the Eurovision Song Contest. Boundaries between countries and genders are relative, and it seems as if all the wars and killing of the last 2,500 years have led to Europeans taking a more relaxed view life and its abysses than people in other parts of the world.

One thing is true: Somewhere along the line, between Plato, Medici and colonialism, 1914, 1933 and 1989, the beautiful and the gruesome, Europe's identity has become an ongoing question.

What is Europe capable of doing, what does it want to be, what are its values and how does it defend those values? These questions will be raised, at least theoretically, during the European election on May 25. But these questions are also being addressed in a more hands-on fashion, with clubs and guns, in the Ukrainian cities of Donetsk, Kharkiv and Odessa.

Keeping Out of History

There is an odd discrepancy to the current situation. On the one hand, there is a dubious sense of calm, a paralyzing passivity. The European election campaign is unfolding in precisely the way Europeans have come to expect, in the wake of world history. In fact, it is practically the European Union's raison d'être, to keep out history, with all of its unpleasant side effects, and it is one of the reasons the EU was founded after World War II, a product of the individual nations' fears of one another.

On the other hand, reality is poking its head, once again, in this darkened room with Brussels-blue walls. Governments have managed to somewhat effectively gloss over the public protests, youth unemployment and growing inequality as a consequence of European policy. But with his aggressive approach in Ukraine, Russian President Vladimir Putin, the vaguely Muppet-like supreme villain, is drawing attention to the fact that the EU is relatively clueless when it comes to defining which values, other than the euro, it represents.

According to a study conducted for SPIEGEL by Infratest, an opinion research institute, Germans disagree over the question of whether resistance to Putin's policies will make Europe more unified. Overall, the majority is dissatisfied with the way the EU member states have behaved in the Ukraine conflict. On the other hand, respondents feel that Conchita Wurst's victory is a sign of tolerance, and that European culture is neither decadent nor in decline.

A Laboratory of the Present

The continent is certainly multicultural, if only out of necessity. It has no choice, and it was never anything but multicultural. From the Romans to the Germanic tribes, the Huguenots and the Poles, the continent has always been in motion, although it sometimes seemed to be suffering from vertigo, as historian Philipp Blom noted in his book about Europe before World War I. But his vertigo eventually led to the modern age, between psychoanalysis and Expressionism. Europe has always been a laboratory of the present.

What began then as the discovery of female desire now encounters the unholy troika of resentment: homophobia, anti-feminism and xenophobia.

The Berlin Wall came down 25 years ago. Twenty-five years is an epoch. Were those the European years, and did we simply fail to notice? With America's decline, the attacks of 9/11, the war in Iraq, Guantanamo, Obama's drones and whistleblower Edward Snowden's revelations, the West, in the form of the United States, has lost some of its sparkle.

But what about China, whose rise is as rapid as it is troubling? Will the Asian century follow the American century? What are the premises on which this coming century is based? What role will Europe play? What is the value of ideals like freedom and tolerance?

We have to revise our perspective. Surprisingly, much of what was tested in the European postwar period seems very appealing, humane and still valid today.

A Machine Designed to Eliminate Politics

An economy, for example, that adheres to rules. A society oriented toward fairness and justice. Human rights that apply to everyone. "After the experiences of the years from 1914 to 1945," writes historian Tony Judt in his history of Europe, people yearned for a "functioning state."

But what else? What was Europe supposed to be? This question was postponed, partly because of the sense of guilt over half of the continent being excluded from this debate, because it was separated from the West by the Iron Curtain.

As Judt writes, the European institutions were founded out of fear and uncertainty. They were never a symbol of strength or optimism. Instead, they represent a power whose decisions are largely exempt from the influence of the people. In Europe, politics is execution and promulgation, without process or discussion. In fact, the EU is a machine designed to eliminate politics.

The economy and prosperity replaced politics as the most important goal of the community. Not even specialists were overly interested in the democratic deficits of European institutions. The consequences are evident today. Europe, attacked from the outside by Putin and from the inside by right-wing populists, is rattled and doesn't know how to react.

Perhaps we know what kinds of values we want, but we don't know what we are prepared to do for those values. Europe is a little like the shy boy in glasses, who is pushed by bullies during recess.

Judt calls it "Europe's original sin:" The inability to learn from the crimes of the past, a nostalgia that makes us forget, and the constant temptation to return to the passive policies of 1938, when Hitler was allowed to do as he pleased.

Some of this attitude still exists today. It seems that many would prefer it if Europe were an island, far away from the world's problems. Political scientist Francis Fukuyama promised this, to a certain extent, when he declared the West the winner in his 1992 book "The End of History and the Last Man," suggesting that the future held nothing but relaxation.

But that didn't happen. History simply continued, unwilling to go away. However, Europeans had already abandoned politics as a means of shaping policy for so long that they reacted helplessly, again and again, to the abrupt unfolding of history. The important questions of war and peace became debates of introspection and doubt in the wave-like rhythm of the decades. In the early 1990s, it was the Bosnian war and the massacre of Srebrenica, in 2003 it was the Iraq War, and today it is the conflict in Ukraine.

No Tolerance without Decadence

So what can and should Europe do? What was missing, during this period of growth and peace in which Europeans became spoiled by success, was a European identity beyond the common market and a fair-weather patriotism of easy accessibility, reflected in the Easyjet feeling of the 2000s: depoliticized, hedonistic and painlessly cosmopolitan.

If Europe examines its identity in 2014, it seeks it in 1914, a fateful year for Europe, the year of World War I and trench warfare. But perhaps it would be better to think less about the war than the period preceding it: about the fears, disturbances and distortions, on the one hand, but also about the dynamism, ideas, scientific and artistic innovative strength of the second decade of the 20th century.

Europe was always a cultural project. It found -- and lost -- itself in its culture, especially when it remained stuck in resentment, the shrunken form of culture.

This is no different today. For instance, what exactly was German journalist Bela Anda trying to say when he wrote about Conchita Wurst, in the semi-reactionary tone of the day: "A beard on a woman's face, especially a full beard, bothers me. It bothers my sense of esthetics, but it also bothers my understanding of the roles of men and women." Anda, the head of the politics department of the German tabloid Bild and the former press secretary of ex-Chancellor Gerhard Schröder, warned against an "egalitarian" Europe. And when Vladimir Yakunin, head of the Russian state railroad and a close associate of Putin, uses terms like "vulgar ethno-fascism" and "Europe's moral decline," he is referring to Conchita Wurst and a decadent West.

But there is no tolerance without decadence. Decadence and tolerance go hand-in-hand, and both have always been closely connected in Europe, this untidy continent.

But the negative image of a homophobic Russia is not part of a European identity, just as Europe is not the antithesis of America. Europe needs foe images in order to understand itself.

For Vice Chancellor Sigmar Gabriel, a member of the center-left Social Democratic Party (SPD), the ruling was an opportunity to elevate Europe's values over those of Google in an article in the Frankfurter Allgemeine Zeitung newspaper: "Europe stands for the opposite of this totalitarian idea of making every detail of human behavior, human emotion and human thought an object of capitalistic commercial exploitation."

The general right of privacy is strongly influenced by a uniquely Euro-centric worldview. The notion that Google should not be allowed to keep all the information it is capable of storing corresponds to a continent that has learned that it is sometimes better to forget, because history, in its abundance and complexity, would be too suffocating. It also makes little sense to search for a viable European identity in history. That would be too selective and possibly manipulative. In the historical year 2014, we should remember that history tends to be dangerous in Europe, and often serves as justification for war, and Ukraine is only the most recent example.

The question is: What should replace history? Philosophers Jürgen Habermas and Jacques Derrida were the last intellectuals to have tried it. It was in 2003, when they speculated that the demonstrations against the Iraq war signaled the "birth of a European public."

Eleven years ago, they dreamed of a common European foreign policy. Since then, we have seen the economic and financial crisis and a few government crises. European identity and the European model, which Judt discussed for the 21st century, must establish itself beyond or in opposition to the institutions of a policy-free EU.

Conchita Wurst is not replacing a common foreign policy and any missing processes of democratic legitimation. Nevertheless, the TV vote in Copenhagen does show that when it comes to tolerance, the masses could very well be farther along than the elites.

At a time when politics is becoming more ideological once again, and as a new Cold War threatens to emerge, this alone is good news.