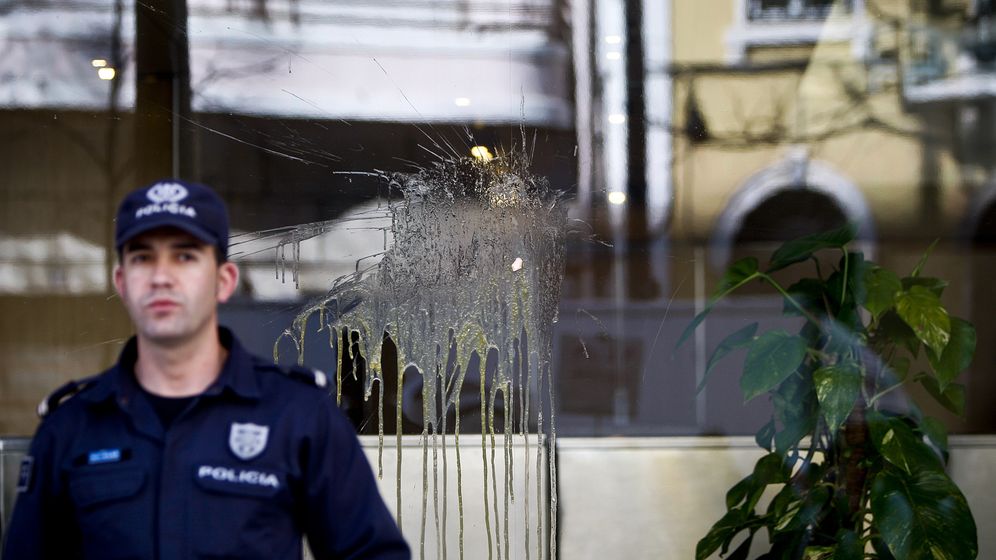 Portugal's prime minister is receiving dubious praise these days. "É uma pessoa boa demais," commentators say of Pedro Passos Coelho -- he's too good a person. Not too good for this country plagued by economic crisis and debt, but too good for the troika, the triumvirate made up of the European Commission, the International Monetary Fund (IMF) and the European Central Bank (ECB), which saved Portugal from national bankruptcy with a €78 billion ($103 billion) bailout and in exchange demands tough austerity measures and structural reforms.

It's true the conservative head of state expects more of his citizens than the troika has even asked. He pushed through an austerity package, lowered salaries to make companies more competitive, privatized state-owned enterprises and cut unemployment benefits as well as payments for overtime and severance pay.

Passos Coelho has even done away with holidays that many of his citizens hold dear: Corpus Christi and Assumption Day, as well as two public holidays celebrating Portugal's separation from union with Spain and the declaration of its first republic. It's time, the prime minister says, to change "lazy and at times self-involved patterns of behavior."

These efforts have made Portugal a poster child for the austerity watchdogs in Brussels. The country is "on the right path," declared EU Monetary Affairs Commissioner Olli Rehn.

In fact, it would seem there's a light at the end of the tunnel -- if it weren't for Mohamed El-Erian, CEO of Pimco.

Is it inevitable that Portugal will become a second Greece over the course of this year? "Yes, unfortunately that will be the case," El-Erian told SPIEGEL in an interview this week. The first bailout package for Portugal will prove insufficient, he believes, and the country will ask for more money, which in turn will likely trigger a debate over a Greek-style haircut involving the private sector. On the whole, El-Erian considers the situation "dramatic."

Those words carry weight, because El-Erian is not just anyone. Pimco is the world's largest bond investor and manages over $1.3 trillion. So in response, both Portugal's prime minister and those overseeing the EU bailout have felt a need to emphasize over the last few days that there will be no further aid, and that Portugal will save itself.

But can that work? Not too long ago, the troika was saying similar things about Greece. But repeated radical austerity programs flung Athens' economy into a deep recession, and the mountain of debt continued to grow.

Portugal too has been experiencing an extended downturn. Its economy hasn't grown in seven quarters and is even expected to shrink by over 3 percent this year. State debt has swelled to around 102 percent of GDP, and according to Eurostat, the EU's statistical agency, unemployment is at nearly 15 percent and rising. There's no question Portugal is suffering a serious crisis and there's good reason for concern that the country will drive itself into the ground with austerity measures, as Greece did.

Still, El-Erian's claim that Portugal has already lost the battle against the crisis is exaggerated. The troika's bailout package is expected to keep the country going until September 2013 or so. That gives Portugal about one-and-a-half years to win back the financial markets' trust and wrestle interest rates on its government bonds back down to a level where the country can once again finance itself on the markets. Experts believe success is absolutely possible.

"There is hope that Portugal will be able to finance itself again by the end of 2013," says Francesco Franco, an economics professor at the Universidade Nova in Lisbon. "All scenarios are imaginable," believes João Luís César das Neves, a professor at the Catholic University of Portugal and a long-term adviser to the government. "Portugal has significantly better chances of overcoming the crisis than Greece," says Klaus Schrader at the Kiel Institute for the World Economy (IfW), a respected German research institute. Schrader co-authored a recently published 70-page report on the state of the Portuguese economy.

Broad Support for the Austerity Program

There is in fact proof that reforms in Portugal are progressing far better than in Greece:

Financial experts hope the country will play on these strengths to regain investors' trust. "Now it's a matter of freshening up Portugal as an investment location so that it attracts investors again," says Schrader at the IfW. "If such tendencies become visible, it will give the country a chance to finance itself again."

Still, a lot has to happen before the country reaches that point.

Interest rates on 10-year Portuguese government bonds leveled off at 13.5 percent in March. The country appealed for help from the EU bailout fund when rates were around 8 percent.

Many structural reforms are still needed before the country can attract investors again. Portugal has to make up for a lost decade. The country last experienced an economic boom in the early 1990s, at which point Portugal had become Europe's workshop in many sectors, a cheap manufacturing location for large corporations. But then came the rise of low-wage countries in Central and Eastern Europe, and the Portuguese government failed to react quickly enough to the competition. Soon the boom was over, followed by long years of economic stagnation.

In some sectors, the country has admittedly managed to modernize, especially in automobiles and electronics. Europe's largest and most modern paper factory is also located in Portugal, near the port city of Setúbal. But productivity is still very low in many other industries and the country continues to import significantly more than it exports. In 2011, its balance of trade had a €15.5 billion deficit.

Then there's Portugal's extremely inefficient agriculture sector. In some cases, it is more profitable for farmers to accept subsidies than to actually harvest their oranges or olives. Tourism has also collapsed since the financial crisis and is only slowly recovering.

These are considerable challenges, yet IfW economist Schrader sees good chances of success. "After all, Portugal had a track record of growth in the 1980s and 1990s that just needs to find a fresh start," he says. "There's no need to change the whole approach to growth, as is the case in Greece." Franco from the Universidade Nova adds that Portugal can also take advantage of two large Portuguese-speaking growth markets in the form of Angola and Brazil.

For Portugal, 2012 will be a decisive year. The country will initiate numerous reforms by this fall. There are plans to reform the justice system; with 1.5 million cases pending, judges are unable to keep up. Improvements to the education system are planned, and the government also wants to further deregulate the job market, an area which has already seen some initial successes in terms of reforms. "The government has lowered salaries to a competitive level in many sectors far more quickly than experts expected," Franco says.

Das Neves, the economics professor, sees the country as approaching phase two of its battle against the crisis. After a decade of economic neglect, he says, in mid-2011 the government finally started to modernize the country, and there has been remarkable progress since then. "At first, there was hardly any room to maneuver," das Neves explains. "All the government could do was cut spending." But if Lisbon sticks to its tough reform program, das Neves argues, it will soon have opportunities to actively stimulate growth -- opportunities Greece never had.

But all this will only hold true if Passos Coelho continues to be the troika's poster child. It's possible that could soon change in the face of political realities. Last week, the current government suffered a setback when Henrique Gomes resigned as secretary of state for energy after only seven months in office.

Shortly beforehand, opposition party PS blocked a plan to consolidate several administrative districts in Portugal as a way of reducing bureaucracy. It was the first time the party had voted against a reform Passos Coelho had negotiated with the troika. The government itself also made the first exceptions to its austerity policies, sparing airline TAP and bank Caixa Geral de Depositos from pay cuts -- and provoking protests from the rest of the country's workers.

"It will be very difficult to win back the markets' trust," says Eva Gaspar from Jornal de Negócios. "But it is also very easy to destroy what little trust the government has painstakingly gained." 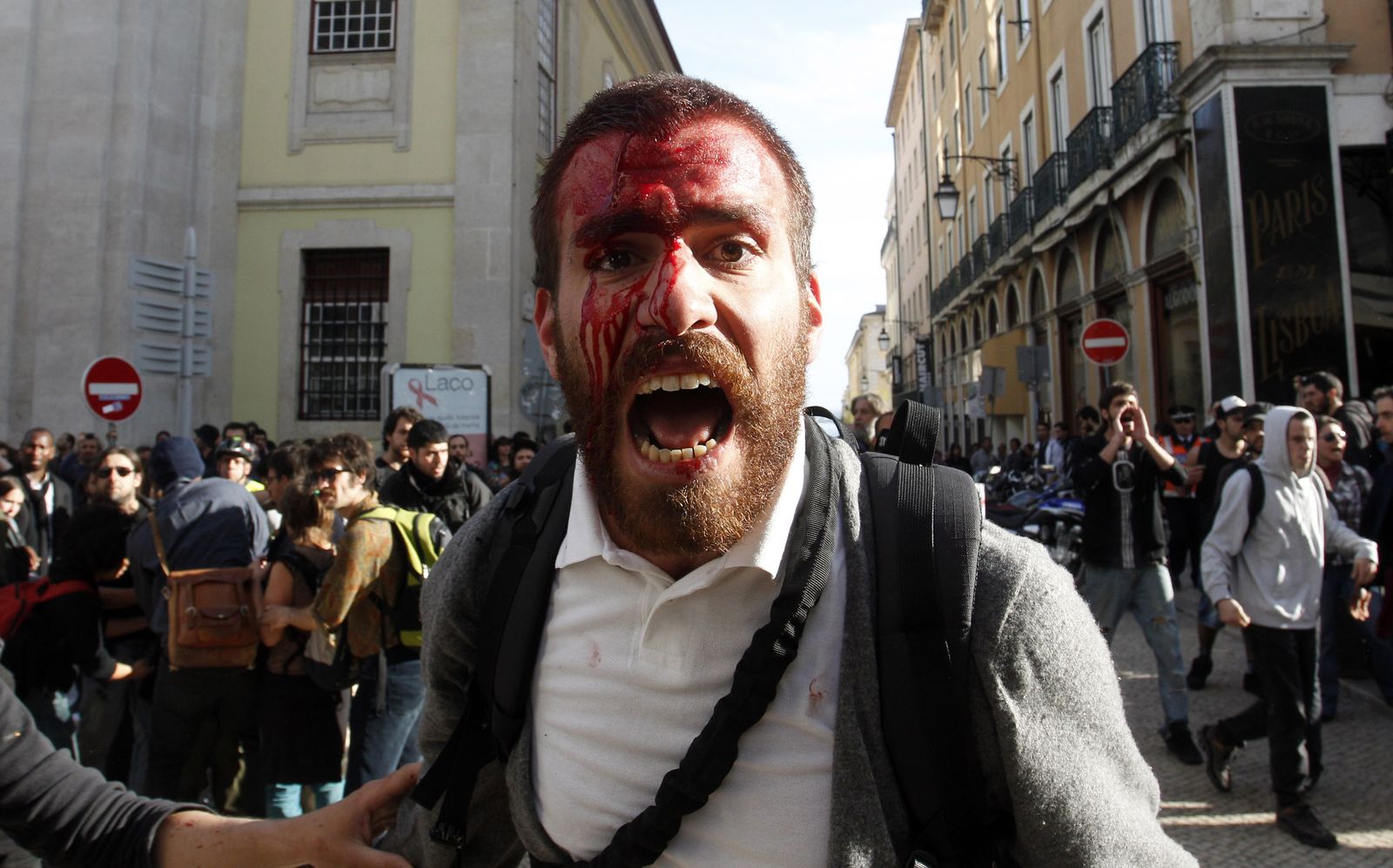 There were clashes between police and protesters during a demonstration in Lisbon to accompany the strike. The government has pushed through an austerity package, lowered salaries to make companies more competitive, privatized state-owned enterprises and cut unemployment benefits.