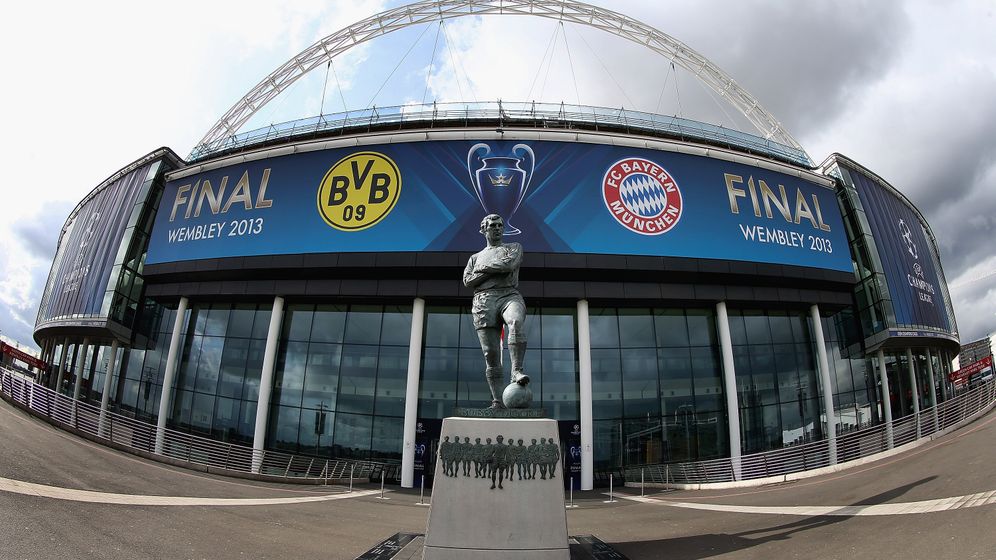 It promises to be a difficult evening for German Chancellor Angela Merkel. She recently confirmed that she is a Borussia Dortmund fan. She has also mentioned that she's an FC Bayern Munich fan. So who will she be rooting for at the Champions League final this Saturday in London? According to a spokesman, Merkel will be following the match "as an impartial observer."

That isn't really possible, though. You can't be a fan of both teams at the same time. The two clubs have been German soccer's major rivals since the 1990s. Anyone who supports both Bayern Munich and Borussia Dortmund must be capable of cheering while mourning and hating while loving -- schizophrenic, in short. Or, perhaps the world champion of indecisiveness, which happens to be an apt description of Angela Merkel, whose approach to politics involves avoiding conflict, embracing everyone and shunning major decisions. Her role as an "impartial observer" will suit her style of governing, at least.

This is the first time that two German teams will face off in the Champions League final, which must be significant -- or is it? What if Arsenal had scored just one more goal in the last 16 against the Bavarians, or if a referee had called Dortmund's offside goal against Malaga? A few chance occurrences here and there and the situation would be different. But here we are. Bayern Munich and Borussia Dortmund prevailed, and now they're both in the final match. There are certainly parallels between this important game and German politics, business and society. There is a story to this final, and lessons can be drawn from it.

The first lesson: It is possible to achieve something in politics. Merkel came into office in 2005 as a reformer, and yet she hasn't accomplished much. While the coalition government, the upper house of German parliament and an apathetic populace are all to blame, perhaps things would have worked out if there had been a plan -- and a decisive chancellor.

The final at London's Wembley Stadium shows that it's possible to fundamentally alter the status quo, however. In the spring of 2000, when the German national team wasn't doing well, league officials and the German Football Association got together and devised a plan. They wanted to do what politicians are also fond of promising: launch an educational offensive. In 2008, Merkel proclaimed the birth of a new Germany, a country devoted to education. What came of it? Merkel made a few appearances, but soon the new Germany was forgotten.

The football officials were more persistent. They thought about Plato, who founded his academy in Athens 2,400 years ago to educate young people. That's what we need, they thought. And even if their plans didn't materialize along quite the same lines, they at least achieved the insight that education is important. As a result, all clubs in the Bundesliga, Germany's top league, as well as the second league, were required to establish an academy for young players, complete with coaches, playing fields and relaxation baths.

From Tanks to Tenderness

The training emphasis changed too. Until then, Germans soccer players were mainly feared as "tanks," powerful players who could hardly stop a ball, but were capable of running endlessly. Franz Beckenbauer called this type of player the "scrappy footballer," and most German players fit the bill. This was painfully evident when the German team captured only one point in the 2000 European Championship. The shock made everyone realize that an educational offensive was necessary.

Since then, the focus on stamina and strength has been redirected to tactics, technique and a certain element of playfulness. German footballers have changed, gradually learning to treat the ball with the tenderness necessary to playing a beautiful and successful game. The national teams in the U-17, U-19 and U-21 age groups have all captured the European Championship, and a young German team captured hearts around the world at the 2010 World Cup.

German youth coaches used to travel to the elite French academy at Clairefontaine or to Ajax Amsterdam for pointers on promoting talent. Nowadays, youth coaches from around the world make pilgrimages to Germany instead. The best centers for new talent -- and this too is an approach unique to Germany -- are often located in smaller cities, like Freiburg, Augsburg and Wolfsburg. National team player Toni Kroos learned his skills in Rostock on the Baltic Sea, while his fellow teammate André Schürrle trained in the southwestern city of Mainz.

The Champions League final is a product of this educational offensive. Bayern players David Alaba, Thomas Müller and Manuel Neuer attended these academies, as did Dortmunders Mario Götze, Marco Reus and Mats Hummels. Both teams play a fast, technically accomplished combination football, playfully strong but not frivolous, characterized by a lack of swagger but enough stamina to attack their opponents for a full 90 minutes in their penalty area. Today's German football looks completely different than it did in 2000.

Part of this also has to do with money and business. Romantics would prefer to see clubs filled with homegrown players, without the transfer fees that allow teams to buy stars from other clubs. And should players need buying, then it should be only by the home team, and certainly not by Bayern Munich. In their opinion, when Munich buys, it's always disgraceful.

But the truth is that big football needs big money. The four semi-finalists in this year's Champions League, Munich, Dortmund, Real Madrid and FC Barcelona, all have enormous stadiums that are usually full, and their coffers are brimming with income from TV rights and advertising revenues. They are all in a position to buy stars, and that's precisely what they do.

Bayern Munich, in particular, is a model of effective economic management, despite the tax evasion scandal surrounding club president Uli Hoeness who, based on what we know so far, kept the club out of his nefarious activities. FC Bayern was run soundly and conservatively for a long time. The executive board and supervisory board members could boast of a strong cash portfolio and were proud that they didn't buy the most expensive players. This, however, meant that they ended up playing elsewhere instead, and routinely saw to it that Bayern was ejected from the Champions League early on.

In 2007, the club's manager finally realized that successful economic management also involves taking risks, and they bought European stars Luca Toni and Franck Ribéry for €36 million ($46 million). Toni shone for only a year, but the acquisition of Ribéry led to a fundamental change. Spectacle became part of the Munich club's game, and it has remained that way. With Ribéry's arrival, the club's fussiness disappeared. He was a wild man on the field, playing divinely at times. In 2009, the club spent €25 million to acquire Dutchman Arjen Robben, an even wilder player than Ribéry, and an even greater risk. Prone to injury, on good days he plays a world-class game, but can be rather unpleasant on a bad day.

These two players were well matched with Bayern's young German players. With the right combination of solidity and risk, the team has made it to the Champions League final three times in four years. Dortmund is now taking the same approach, after the club almost plunged into bankruptcy in 2005.

An economic phenomenon once called Germany Inc., whereby the domestic economy largely ignored foreign investors, has been preserved in German football. The same policy still exists in the Bundesliga, which is dominated by DAX-listed companies Volkswagen, Daimler, Deutsche Telekom, Adidas and Bayer, which have entered into long-term commitments as sponsors and investors, but as shareholders are not allowed to have voting majorities. This is not a chauvinistic attitude. Russian natural gas producer Gazprom is also welcome at Schalke. The point is that these companies are in it for the long haul, are able to weather crises and have no interest in treating clubs as investments designed for quick profits, as is sometimes the case in England.

Another factor contributing to the success of German football is that the German economy made it through the crisis relatively unscathed. Spanish clubs are often burdened with substantial tax debt, with repayment deferred by a government that now needs every euro it can get. This makes Spanish football part of the same economic bubble that is now deflating there. As it gets more difficult for Spanish clubs to pay high transfer fees and salaries, it will no longer be unthinkable for players like Lionel Messi or Cristiano Ronaldo to play for a German team one day, despite the bad weather. Footballers like to follow the money trail, and in the future it could lead to FC Bayern Munich more often than in the past.

The final also sends an interesting social message. The victory in Wembley will be the first international success for a new type of man in Germany. Fans and journalists have long debated whether some players are too soft, and not sufficiently manly, to win a major final. It was the sort of charge leveled against players like Philipp Lahm and Bastian Schweinsteiger, who have already lost three international finals.

In fact, they are somewhat more effeminate, reserved and adaptable types. In the past, fans were accustomed to so-called alpha males, players like Oliver Kahn and Stefan Effenberg, who won the Champions League in 2001 with Bayern Munich. Or Matthias Sammer, who had the same experience with Dortmund in 1997 and led the national team to the European Championship in 1996. And Lothar Matthäus, the leader of the national team that won the World Cup in 1990. They attracted attention with their tough and powerful playing style, their crass behavior and publicly celebrated affairs with women (except Sammer). In other words, they were "real men." But it also made them tedious.

In contrast, Lahm and Schweinsteiger seem to be eternal boys. They could very well lose their fourth international final, but it will be against other boys like Marco Reus, Robert Lewandowski and Ilkay Gündogan, and not gorillas. If we include Mario Götze, who was injured in the semi-final, Borussia is a team shaped by conformists. But that's a good thing, because the modern game depends on a collective of players who must be able to do almost everything. Each player is equally important, and no one needs a teammate who determines everything and dominates the team. That's why it was a smart decision when national team coach Joachim Löw removed Michael Ballack, the last of the alpha males, from his team. Ballack also lost all of his major finals. No one needs men of the old, wild mold anymore. It's the same in society. We have entered the era of teamwork.

For the rest of Europe, the fact that Germany's players are such nice boys makes their dominance somewhat tolerable. Our neighbors have already had to put up with Merkel largely dictating the euro zone's fiscal policy guidelines. Germany dominates the Continent economically, and now it's doing the same in football. But the players rule the field in an exceedingly decent way, which is why no one holds it against them. In this fashion, the final is also an important part of a general German choreography. Germany's politicians are asking a lot of their neighbors, but German football makes up for it a little with its attractiveness.