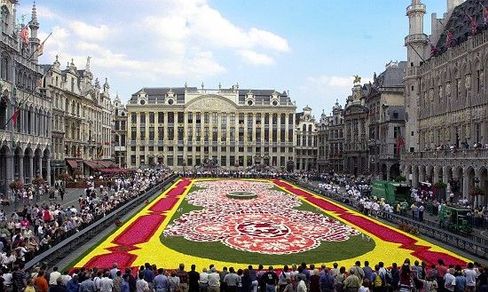 Though the city is officially bilingual, the Flemish have sheer contempt for Belgium's capital city, Brussels.

As far back as the days of the Roman empire, Julius Caesar described the penchant of Belgians for quarrel. Generally, the small Gallic people are full of zest for life -- slurping large quantities of oysters and champagne, and showing a distinct fondness for French fries and pralines. Their politics, on the other hand, are hard to digest -- as has become evident day after day since parliamentary elections took place on June 10.

In Flanders -- the northern part of the country, where Dutch is spoken -- victory fell to Yves Laterme's conservative Christian Democrats. The Flemish leader had pledged to hand important powers in the areas of taxation, health and social policy over from the central government in Brussels to the country's regions. The move would essentially transform federalist Belgium into a kind of confederation of states. However, the Belgian constitution requires Leterme to find partners among the Walloons in order to implement his project.

The Walloons live in the south, speak French and think nothing whatsoever of Leterme's plans. They were once the country's upper class -- first in the royal court and later in the prospering coal and steel industries. But those industries are long gone and Wallonia has since become Belgium's poorhouse, dependent on transfers from the wealthy north. In June, the Walloons voted the Liberal Party to the top of the polls. The party wants to leave the country as it is, which is to say it is opposed to everything that Flemming Leterme wants to do.

The electoral winners from the north and the south of the country have been meeting regularly since the election -- yet they remain clueless on how to proceed. If they yield to the other side in Brussels, they're doomed back home; if they remain tough, there will be no new government. Meanwhile, the country is treading water: outgoing Prime Minister Guy Verhofstadt's government, which was voted out of power, is still provisionally in charge of official functions. But all important projects have been put on the backburner.

The country has long been divided by an invisible wall: In one half, people watch French television, read French-language newspapers and learn French in school; in the other, people speak and read Dutch. When someone asks directions in French in Flanders, they rarely get an answer. While many Flemings have learned the language of the south, they refuse to speak it.

Most Walloons don't even understand Dutch, which they often disparagingly refer to as a "farmers' language." The Council of Ministers, the cabinet of the Belgian prime minister, even employs translators to ensure Walloon and Flemish ministers are able to communicate with each other.

The Belgian linguistic tribes badger each other with relish whenever an opportunity arises. Fiscal authorities in Flemish suburbs on the edge of Brussels only accept letters and forms written in Flemish, even though the majority of the tax payers are French-speaking Walloons. Public-sector employers reject cleaning ladies because they do not speak perfect Flemish. And the controversy over the just distribution of aircraft noise between the Flemish, Walloon and "bilingual" suburbs around Brussels' Zaventem airport, which has been ongoing for years, forces arriving and departing pilots to fly complicated curves and loops.

Belgian novelist René Swennen believes that Belgium's demise is imminent, and that the country's split into two halves is "unavoidable." No less than 43 percent of all Flemings are in favor of an independent Flanders. Even the leading Walloon newspaper, Le Soir, sees only two options: "Divorce or separate bedrooms."

The "cement" holding the country together now consists only of "the king, the national soccer team and the beer," argues historian Vincent Dujardin. But cracks are appearing. 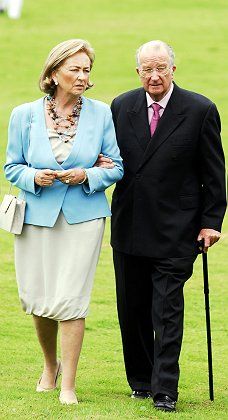 Queen Paola of Belgium and King Albert: Not much loved by the Flemings.

King Albert II is not very popular, especially in the Flemish north. His Dutch is poor, critics say. And it has been some time since Belgium's soccer artists have put in a good performance. Following a disappointing draw in Kazakhstan last Wednesday, the Red Devils have failed to qualify to play at the next UEFA European Football Championship in Switzerland and Austria next summer.

And not even Belgian beer -- of which there are no less than 400 brands -- is enough to provide much of a national identity these days. It is increasingly becoming a regional affair: Flemish politicians drink the good, heavy beer from their region while eschewing brews from the Walloon south. Meanwhile, their contempt for Brussels -- once a Flemish metropolis but now populated mainly by Francophone Belgians -- matches that of many a critic of the institutions of the European Union that have their headquarters there.

The ignorance Belgian politicians display towards their own country sometimes leads to grotesque situations -- most recently on July 21, the Belgian national holiday. Asked by a TV reporter to sing the national anthem, the Fleming Yves Leterme intoned the wrong song. Instead of the Belgian "Brabanconne," the man who may become the new government leader belted out the French "Marseillaise."

It wasn't his only mishap that day. A different journalist questioned him about the historical occasion for the festivities, which include a military parade and a church service. "The proclamation of the constitution," Leterme replied. Wrong again.

His supporters laughed it off: So what? Like 98 percent of all Belgian citizens, Leterme's Walloon adversary as well as the outgoing prime minister would not have been able to give the correct answer either. (The holiday commemorates the official oath taken by the first Belgian king in 1831.)

And what do they care about the hymn, the flag and the national holiday anyway? There are Flemish-speaking Flemings, French-speaking Walloons and a small German-speaking minority around the town of Eupen, a linguistic enclave located near the border with Germany.

Perhaps the words of Jules Destée ring truest. When Belgium's then king tried to stir up feelings of national unity in the country in 1912, the Walloon socialist retorted: "There are no Belgians."