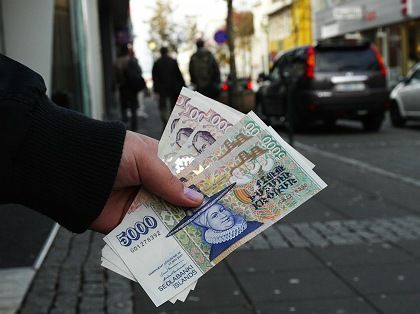 The Icelandic krona: a currency and country in freefall

The day doesn't start off well for Hanna Hrefnudottir. The interior designer has arrived early to stand in line in front of Glitnir Bank in downtown Reykjavic, and she's the first person to make her way to the teller counter. She pleas, she begs and she fights. It does no good. She isn't able to withdraw any cash. "Not a single krona," she says.

The 43-year-old wanted to withdraw 500,000 Icelandic krona -- a sum worth about €4,000 just 2 months ago -- from her private savings account and another $60,000 from her dollar account. "I want to take my money home," she says. "I don't believe a single word the government is telling us anymore. We just get false information."

For years the designer saved money, for her four children and her business. She decided to put her money in normal savings accounts with conservative, government-stipulated interest rates. She wanted nothing to do with risky investments. She wanted to stay on the safe side, and now this.

Last Monday, Icelandic Prime Minister Geir Haarde spoke for the first time in a televised address to the nation about the possibility the country could go bankrupt, and Hrefnudottir reacted immediately. Since then she has tried every day to fetch her money. One day the bank paid out $1,000, and on another she even managed to get $19,000. But on some days, like today, she goes home empty-handed.

No one knows for sure what the coming days will bring. All the tricks, like moving savings to the accounts of other family members or going to tellers at different banks, have ceased to work.

That won't keep Hanna Hrefnudottir from returning tomorrow. And the day after -- for as long as it takes to get all of her money out of the bank and safely to her home. Miming the shape of a large box, she begins to describe the large and secure safe she has in her house. Neither the threat of thieves nor fire makes her fret. "Anything is safer than the bank," she says.

With the financial crisis reaching epic proportions, the atmosphere in Iceland, with its 320,000 residents, ranges at the moment from tense to outright panic. The government has nationalized the country's three biggest banks -- first Landesbanki and Glitnir, and on Thursday it surprisingly swallowed banking sector leader Kaupthing.

Forv many, that move dashed any remaining hope people had had of escaping this crisis unscathed. Kaupthing had been considered a comparatively solid bank that had been successful with its audacious buying spree throughout half of Europe. Using dubious financing tricks, bank executives snapped up one financial institution, retail chain and supermarket after the other.

Those deals, however, relied on "debt investments," says consultant Pall Pallsson. The bank was only able to continue as long as it could secure liquidity to refinance its loans, which it did by taking advantage of the seemingly endless availability of foreign credit and obscure capital flows -- it was a pyramid scheme.

When the financial crash struck the United States and Europe, the scheme collapsed. Foreign banks no longer wanted to finance suspicious debt. Prime Minister Haarde sought to assuage fears by saying that Iceland's banks hadn't been taking any more risks than those of other countries. The problem, he said, is that, three banks in Iceland largely "account for the country's entire financial system."

Today, the country faces the real threat of state bankruptcy. Foreigners who had been lured with campaigns advertising time deposit interest rates of 6.1 percent (an investment you could "trust in the long term") now fear their private investments will be lost. And Germans who conduct online banking through Kaupthing are currently unable to access their money. Company owners fear they will lose access to liquidity and home owners are worried about their financing plans.

Meanwhile, the Icelandic krona is in freefall and nobody can say what its actual exchange rate is. Inflation has surged to 14 percent. Interest rates on loans have risen to a dramatic 15 percent. People are losing their jobs, fear is spreading as well as depression. On top of all that, the Icelanders now have to swallow the bitter pill of accepting billions in loans from Russia.

Landsbanki wants to sack 500 of its 1,500 workers, Glitner 400 and Kaupthing as many as 1,000. Other companies are also starting to fire staff. Construction and home improvement store Husasmidjan -- one of Iceland's top 30 companies with its annual sales of €220 million -- will have little choice but to "cut costs," says CEO Stein Logi Björnsson. The company is expected to announce the loss of 200 jobs.

"We just have no idea what's going to happen," says Baastyan Bajer, 29. His wife, Ilona Najdek, had just returned from the bank teller counter without any luck. They wanted to exchange the 500,000 krona they have saved up into euros, despite the horrendous exchange rate. The young Polish couple moved to Iceland just a few years ago. For a year, they deposited all of their money at the bank, but now they need it. Ilona is in her late stages of pregnancy and the couple say they "no longer have enough money to pay their bills."

The bank has refused to wire money to Ilona's accounts back in Poland, and at the moment, the maximum she can withdraw is €360, not a cent more. "I have no idea how we are supposed to go on," says Najdek. "Maybe we'll have to go back home and have our child in Poland."

Iceland's economic miracle was wrecked by a new generation of financial market jugglers who took advantage of the new spirit of optimism in the country's burgeoning financial center. The sky seemed the limit after the country's banks were privatized just 10 years ago.

For consultant Pallsson, 54, it was a bit like when the Vikings set off 1,000 years ago from Iceland to conquer the world and plunder its riches. "The island was too small for them back then, too. There were no dreams left for them to fulfil here," he says.

Pallsson knows what he's talking about. He studied industrial engineering and, for years, was also involved in the financial markets, freely investing venture capital in hi-tech firms and telecommunications companies. When the IT bubble burst, he lost everything, "including my home." He had to start over again and focused entirely on low-risk equity stakes. "In the end, the global players in banking succumbed to an uncontrollable addiction to gambling," he says. "It's the same with any rush." But now everyone is stuck footing the bill for the bailout.

The showroom of Hekla, Reykjavic's largest car dealer, is filled with shining VW and Audi sedans. But few are looking at the cars. Sales have recently fallen by 60 percent. "The first things to stop are home construction and car sales," says CEO Knutur Hauksson. He looks a lot less unhappy than the situation perhaps warrants: He has to purchase his vehicles in euros from Germany, and his costs are spiraling out of control.

"The krona is currently down 75 percent, but prices have only risen by 30 percent," says Hauksson. "All we can do is wait and see."