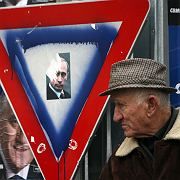 Russian President Vladimir Putin is casting a large shadow over the Serbian elections set for this Sunday.

The Serbian province of Kosovo may be heading toward a declaration of independence. But it is increasingly looking as though its life as a sovereign nation may not be any easier than it is now.

Russia this week made it clear it will not allow Kosovo to become a member of the United Nations under any circumstances -- even if it declares independence. Moscow is not only backing its ally Serbia -- it is actively encouraging it to resist a unilateral declaration of independence by Kosovo.

Serbian President Boris Tadic told the UN Security Council on Wednesday that his country would never recognize an independent Kosovo, the Serbian province that has been under international administration since 1999, and the Russian ambassador to the UN, Vitaly Churkin, made it clear Moscow shared this position.

"They would not become members of the United Nations, they would not become members of international institutions  if they go down the road of unilateral declarations," Churkin told the 15-member council. Russia is one of five Security Council members that wields veto power, meaning it could easily block Kosovo's path to full international recognition.

Moscow wants to keep the Kosovo issue within the UN rather than letting it become a matter for the European Union. But while Serbia and Russia urged the UN on Wednesday to keep seeking a solution, most Western countries feel that the years of negotiations have already failed to deliver any meaningful compromise and that there is nothing left for the UN to do.

US Ambassador to the UN Zalmay Khalizad told reporters after the meeting that the Security Council route was blocked and it no longer had any role to play. Churkin, however, chose to differ, saying that Kosovo was "locked in the Security Council." And on Thursday in an article published in Bulgarian newspapers ahead of his visit there, Russian President Vladimir Putin said: "It is clear that any solution for Kosovo must be in keeping with international precedent and practice."

According to Alexander Anderson, in Kosovo for the International Crisis Group, Russia is doing all it can to support Serbia and to encourage Belgrade not to abandon its hardline position. Russia, he says, still sees former Yugoslavia as being within its sphere of influence -- a holdover from the days of the Soviet Union -- and is using the Kosovo issue as a way to "maintain its foothold" in Moscow's rivalry with the European Union. "Russia is going to use every lever it has in the UN to make a unilateral declaration of independence difficult," Anderson told SPIEGEL ONLINE.

Russia has long been a stumbling block in the search for a mediated solution. The UN path to a coordinated independence, as outlined by special envoy Martti Ahtisaari last spring, was blocked by Russia's veto. Then an international troika, made up of mediators from the United States, Russia and the European Union spent three months overseeing talks between Belgrade and Pristina. On Dec. 10 they announced that their efforts had also failed.

Kosovo has remained nominally part of Serbia since a NATO bombing campaign brought a Serbian ethnic cleansing campaign to an end in 1999. But the two million Kosovo Albanians have long made it clear they will be happy with nothing short of independence. The newly elected Kosovo prime minister, Hashim Thaci, a former guerrilla leader said on Wednesday that Pristina would not be waiting much longer. "The decision will be taken very soon," he told reporters after the UN meeting. The US and most EU states have been supportive of the ultimate goal of independence but have urged the Kosovo Albanians to hold their fire until after the Serbian presidential elections this Sunday.

The Serbian elections will be crucial and the campaign has centered on Kosovo and by Serbia's relations with the EU. Although President Tadic has maintained opposition to Kosovo independence, he is also in favor of closer ties with the EU. If his ultra-nationalist rival Tomislav Nikolic were to win, it would signal a clear move away from further integration into the EU. Pollsters are predicting a tight race with the two frontrunners almost certain to go into a run-off on Feb. 3.

At the UN meeting on Wednesday Tadic said "Serbia will never recognize Kosovo's independence and will preserve its territorial integrity and sovereignty by all democratic means, legal arguments and diplomacy." But the Serbian president made sure to reassure his audience that there would be no return to the violence that plagued the Balkans in the 1990s. "Serbia will not resort to violence and war."

While Serbia could opt to impose measures such as blocking electrity or trade into Kosovo, this may well only serve to alienate the EU without achieving much else. After all Kosovo would have alternatives and it is an important market for the Serbs. Anderson says the Serb saber-rattling and talk of measures to blockade Kosovo is largely an exagerration of its capacity to do any real damage. "Serbia's ability to make life difficult for Kosovo has been overplayed."