Jean-Claude Juncker isn't the kind of man who likes to be told to keep quiet. When it comes to defending the European Union, the Luxembourger doesn't usually hold his tongue for long. But when it comes to what could turn out to be the most important issue of his term in office -- the threat of Britain's exit from the EU -- the head of the powerful European Commission has been astonishingly quiet.

The reason is that Juncker had to promise British Prime Minister David Cameron that the EU executive branch would stay out of the Brexit debate. Officials in Brussels have a miserable reputation in Britain, and the last thing Cameron needs at the moment are EU commissioners promoting the union. Much to Juncker's chagrin, that also applies to the Commission president himself.

Juncker only managed to convince Cameron to give him a small loophole: If Brexit supporters have a clear lead in polls in the week prior to the June 23 referendum, the Commission president will be allowed to make his voice heard. That, of course, would be too late to significantly shift public opinion, but it would mean that Juncker could not be accused of having done nothing to prevent a Brexit. Under no circumstances does Juncker want to go down in history as the first Commission president to preside over a member state departing the EU.

The image put forward by the EU these days is not a strong one. On the contrary, fear appears to have the upper hand. Juncker's Commission, with its 30,000 civil servants, has nearly ground to a halt, with June 23 marked in red on staff calendars. All initiatives are anxiously examined to determine whether they might provide ammunition for Brexit supporters. Juncker even personally asked each of his 27 commissioners to use "common sense" during any visits to Britain.

One of the victims of this caution has been chief EU diplomat Federica Mogherini, who has spent recent months crafting the EU Global Strategy -- the first comprehensive foreign policy guidelines for the union since 2003. The original intention had been to present the paper in the coming days, but it has now been delayed.

Foreign and security policy still remain the domain of EU member states, and hardly any other union member is as insistent about its sovereignty as Britain. Furthermore, Mogherini's draft text includes ideas aimed at exploring stronger joint European defense efforts -- a potentially dangerous approach given that British tabloids passionately disparage any suggestion of a European army. Mogherini has now been forced to push her presentation back to June 24.

EU member-state leaders have also become infected with the Brexit virus. They had originally planned to hold their regularly scheduled summit, organized months in advance, on June 23 and 24. There is certainly no lack of pressing issues, but because of the referendum, the summit is now taking place a week later. There is one advantage to the delay, of course: If the British do in fact vote to leave the EU, European leaders will have a chance to immediately discuss the consequences at the summit.

Fears of a Brexit are also paralyzing the Brussels bureaucracy. New environmentally friendly design requirements for hair dryers, toasters and smartphones are long overdue, but those kinds of regulations are easy prey for populists in Britain already upset by EU rules on such things like the electricity consumption of lightbulbs or vacuum cleaners. The plan now is for eco-design directives to first be updated after the referendum. Even routine measures announced long ago, like a planned European Commission recommendation for CO2 emissions for road transport have been delayed. The Commission's proposals on controversial issues like legal migration to Europe are also largely completed, but it remains unclear whether they will be passed and presented as planned on June 7. "That is a political decision," sources say.

One innovation that Juncker introduced when he began his term could actually turn out to be a boon for him now: the bureaucracy check. Each new law must undergo an additional review by Juncker's Dutch deputy, Frans Timmermans -- and he also holds the right to veto. The measure was intended to send a message to Europeans that the Commission would spare them from laws that are overreaching or have no real purpose. Now, though, the measure serves to slow down all measures that might anger the British. Since the beginning of 2015, more than 80 legislative initiatives have been halted using the new procedure.

But British Prime Minister Cameron hasn't leave anything to chance: He also wants to avoid any unpleasant surprises from EU member states prior to the referendum -- in the form of overly ambitious proposals made in Brussels, for example. It's a request the Brits made directly to the Chancellery in Berlin, in addition to an appeal from Cameron that Chancellor Angela Merkel stay out of the referendum debate. Even comments intended to provide support are not helpful, the Chancellery was informed.

Merkel, say sources close to her, has made it clear internally that she wants to respect that wish. Berlin plans to stay completely out of the Brexit debate in the coming weeks.

It seems likely that not everyone in the Chancellery is pleased with the reason the British invoked in making their request. Merkel's reputation in Great Britain has plummeted dramatically since the refugee crisis, one British diplomat said. Her market value in Britain at the moment is about at the level of a European commissioner. "It's better not to have her on your side," the source said. 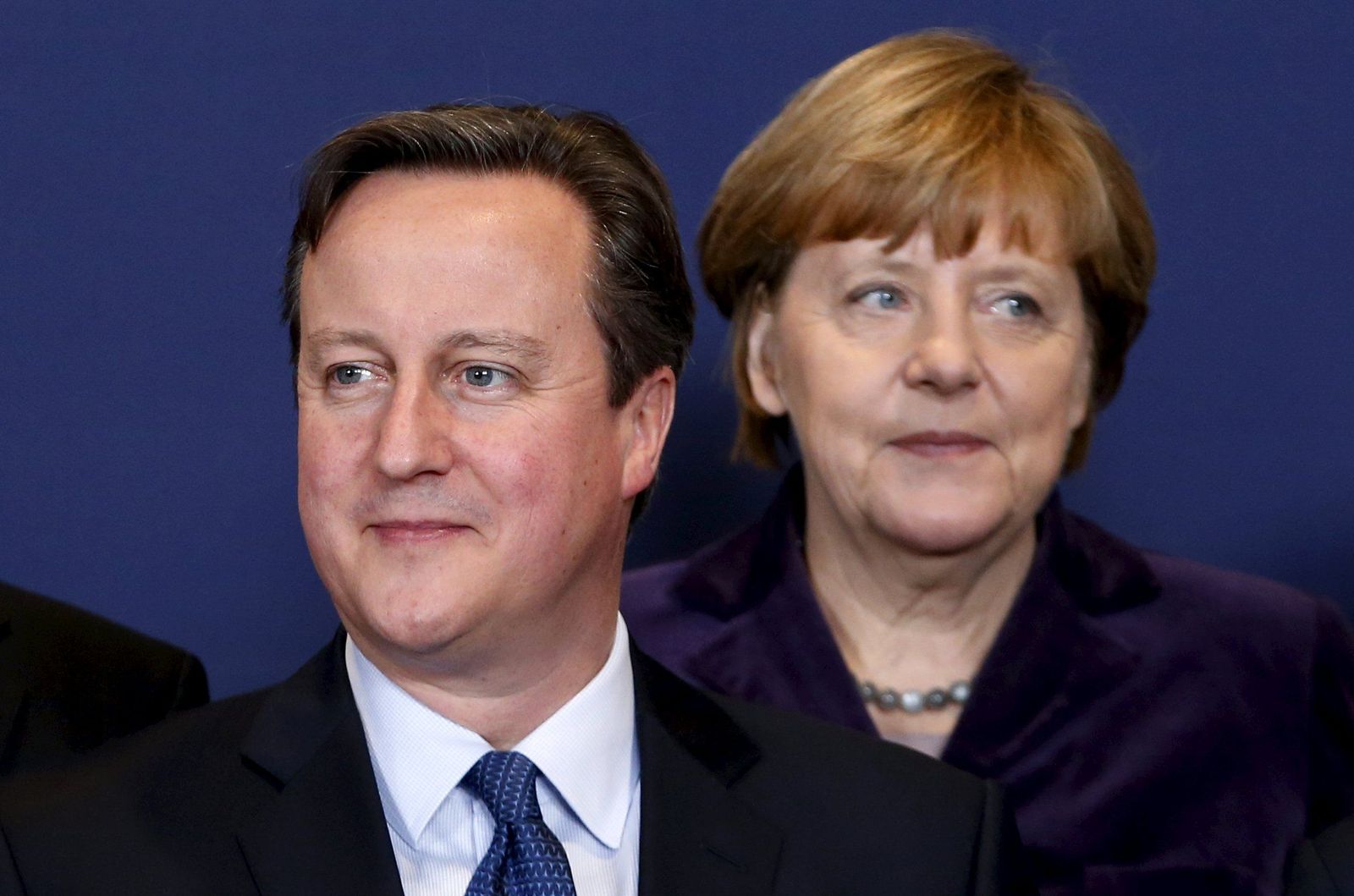 Her lips are sealed: Sources in Berlin say German Chancellor Angela Merkel will stay out of the Brexit debate as Prime Minister David Cameron has requested.