Alexis Tsipras, the man who will very likely emerge again as the winner of the upcoming Greek parliamentary election, is campaigning throughout the country primarily under one slogan: "We won't pay any more."

He doesn't say what would replace the "barbarism of the austerity dictates," which he maintains that the European Union partners, above all German Chancellor Angela Merkel, have forced upon his country. He argues that the Europeans are only bluffing -- and he promises that they will continue to help, even if the Greeks no longer service their debts. He says: Elect me and all this misery will come to an end.

Stavros Lygeros, 59, is sitting in a café in the posh Athens neighborhood Neo Psychiko. Lygeros is a political commentator and a bourgeois intellectual. He's endeavoring to explain why the Greeks are following Tsipras in droves, although this young politician is clearly a seductive new star and his successful radical left-wing Radical Left Coalition (Syriza) cannot explain who will pay the future salaries of civil servants, doctors and nurses. Lygeros says that many Syriza voters don't even believe that this party has a solution.

The tragedy is that Greeks don't really have a choice when they return to the polls on June 17 -- their only option is refusal and protest. Suddenly all of Europe is demanding that they vote once again for, of all people, the very politicians who brought them all this misery in the first place, namely the socialists under Evangelos Venizelos and the conservatives under Antonis Samaras.

Because the discredited parties stand for the loan agreement and the conditions laid down by the lenders, many Greeks see Tsipras as their only alternative. At 37, he is young compared to the usual gerontocrats who dominate Greek politics. With an annual income last year of €48,000 ($61,000), a motorcycle and a modest apartment, he's fairly poor for a politician, which is yet another factor that fuels his popularity among voters. And he's the only one who promises to free Greece from the yoke of the austerity measures -- yet retain the euro.

Up until the crisis, Greek politics was governed by an "unwritten social contract," says Lygeros, author of the bestselling book "From Kleptocracy to Bankruptcy," which deals with Greece's economic collapse. According to Lygeros, this contract was based on giving and taking. Voters left the politicians alone. They didn't complain about waste and corruption and, in return, were rewarded by the two alternating main governing parties with public service jobs and waves of new social services.

The crisis has brought this tacit agreement to an end and the social contract has collapsed, says Lygeros. Now, there is no longer any money for either side. According to Lygeros, today's dilemma is that "the old kleptocratic system, which created these sick conditions" is bankrupt in the truest sense of the word, yet there is still no new one to replace it. At the same time, he notes that the troika consisting of the European Commission, the European Central Bank and the International Monetary Fund has lost all credibility because it has so visibly allied itself with the ruling class, which has long since been discredited.

Thus, a politician doesn't have to be a demagogic genius to harness the enormous discontent among the population, as Tsipras is currently doing. And Chancellor Merkel's alleged proposal that Greece hold a referendum on its membership in the euro zone only makes life easier for the left-wing candidate. She's treating Greece "like a protectorate," he says.

Of course the entire country has not blindly succumbed to the audacious charm of this self-appointed savior. Greek President Karolos Papoulias, who named an interim government last week under a senior judge, Panagiotis Pikrammenos, strongly urged his fellow Greeks to secure the viability of a new government when they vote in the next election. Otherwise, he said, the country will be bankrupt by the end of June.

'Without Help, We Cannot Survive'

Many in the media have also painted a highly appropriate picture of the situation. The rather conservative Athens daily newspaper Kathimerini describes the failure of coalition negotiations as the "ultimate shipwreck."

And not everyone among the ranks of the new political force in Athens is feeling overly optimistic. Giannis Dragasakis, 64, is a Syriza member of parliament and a graduate of the London School of Economics. He suspects that it will be difficult for his party leader to keep his promise.

Dragasakis says that Syriza's success primarily means a great deal of responsibility. He also admits that Greece is unlikely to pay back its debts completely. "The mountain is too large," he says, adding that the country is mired too deeply in recession. "Without help, we cannot survive," he says.

Indeed, "a joint European approach" is now needed, he adds. But no one really knows what form this should take. Until now, international lenders have refused to renegotiate the bailout packages. Dragasakis would like to see a "road map" for more growth, but he doesn't say precisely how this should look. In contrast to Tsipras, he doesn't talk about revoking the loan agreements.

The Europeans will also have to accept the election results, he says, and recognize that a new, younger generation has taken the reins -- Tsipras' generation.

Dragasakis doesn't know whether Tsipras can keep his promises. "But at least he hasn't made a deal with the old system," he says.

And that alone could be enough for him to win the next election. 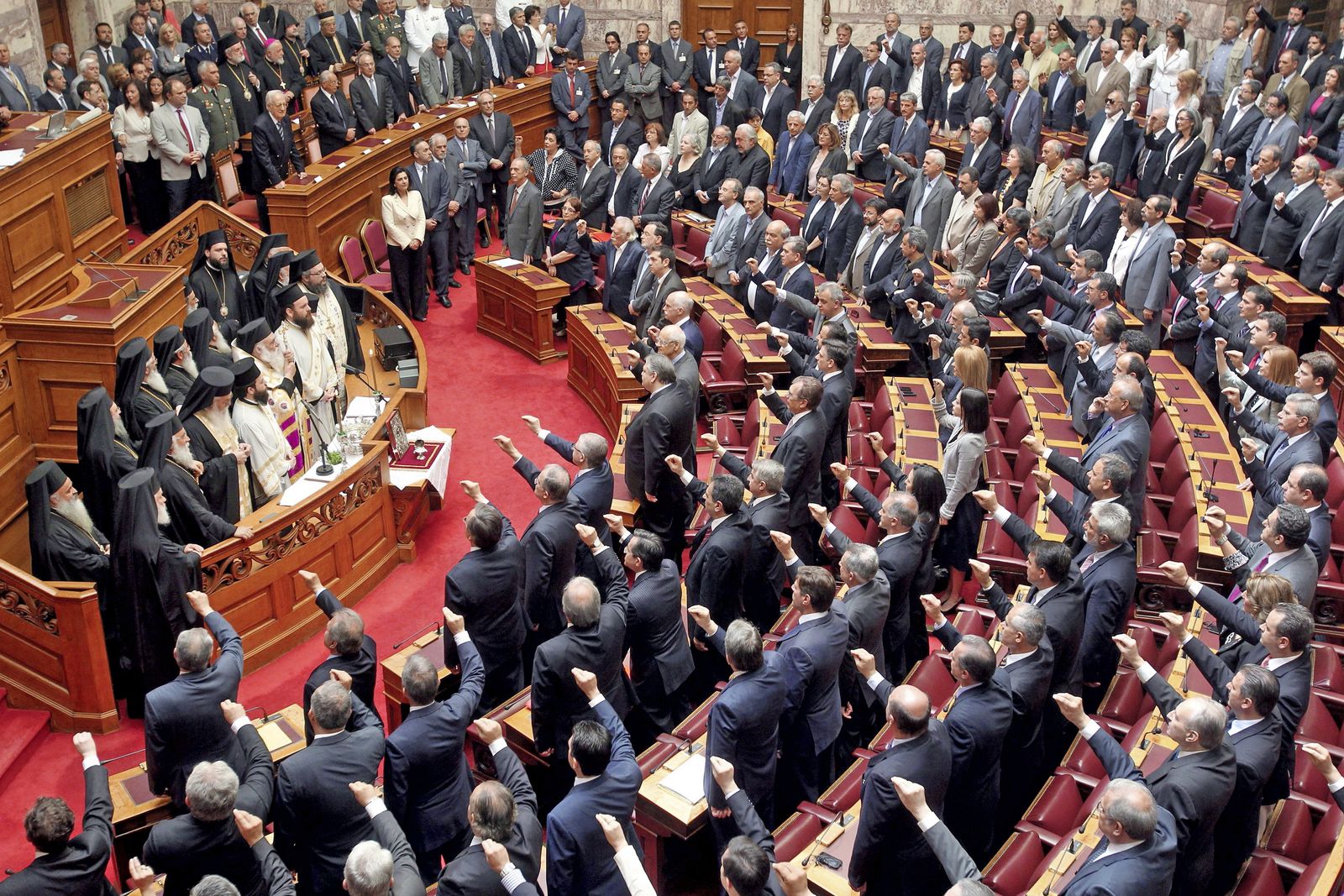 The new Greek parliamentarians were sworn in on May 17, but they won't be around for long -- new elections are set for June 17.