Mark Rutte is the most successful liberal politician in Europe. Although his party will lose about one-quarter of its seats in the House of Representatives in The Hague, the prime minister of the Netherlands is this biggest winner in Wednesday's election. For the third time in a row, his right-wing liberal VVD party has emerged as the strongest force in the Dutch parliament, with a comfortable lead.

Just a few weeks ago, it looked like right-wing populist Geert Wilders would win. Only a few days ago, six parties had at least an outsider's chance of coming in first place. But now Rutte has come out ahead by a clear margin because two populists wouldn't stop insulting him.

Why Did Rutte Win?

Rutte's election win had a Turkish father: Recep Tayyip Erdogan. The more rudely the despot from Ankara insulted the Netherlands, the more the Dutch stood behind their prime minister. Rutte managed the crisis in a highly professional manner: He drew a red line by, first of all, denying entry to Turkey's foreign minister and then having Turkey's family affairs minister escorted out of the country in a polite but determined manner. And after the scandal, Rutte portrayed himself as a conciliator. Instead of responding to Erdogan's attacks in the same way, he invited Erdogan's Prime Minister Binali Yildrim to share a meal. And he agreed.

In the TV debate with Wilders on Monday, Rutte then pushed his opponent against the wall. When the far right politician called for the Turkish ambassador to be thrown out of the country, Rutte coolly answered: "That is the difference between tweeting from a bench and governing a country." The Dutch also place a great deal of value on Rutte's pragmatism. In the last few days before they went to the polls, Rutte won the crucial votes he needed in order to get a clear lead on Wilders. Previously, Rutte had profited more from the slackening support of his rival than from his own strength.

Rutte broke some election promises in the past years, and as a result his party also lost about one-quarter of its seats, but he delivered on his core theme. The Dutch economy is booming again after a long crisis, with growth rates of 2 percent and an unemployment level sinking towards the 5 percent threshold. It has its extreme levels of interconnection to the outside world to thank for this: The small country, with its mere 17 million inhabitants, exports more goods into the world than the United Kingdom or Italy.

Rutte needs to forge a completely new coalition because his coalition partners up to this point, the Social Democrats (PVDA), have disappeared into the political abyss as a result of serious discontent over the government's social reforms. Rutte now needs at least three coalition partners, but he can choose from among four centrist parties: the Christian Democrats, the left-wing liberal D66, the strong Greens as well as the Social Democrats. He can then play them against one another and won't have to worry about having to make too many concessions. In Germany, Chancellor Angela Merkel can rejoice over the fact that Rutte is staying in office. On many issues, he has been her most important ally in the EU.

Who Is Responsible for Wilders' Failure?

Wilders himself. For months he led in the polls, but now he has apparently lost even second place to the Christian Democrats (CDA). Early results Wednesday indicated his one-man Party for Freedom (PVV) wouldn't even attain its 2010 election result. As the party's only official member, Wilders has only himself to blame.

"PVV was invisible during the election," says Amsterdam-based political researcher Tom van der Meer. Wilders had stayed away from almost all TV debates and only rarely made public appearances during the election. But that's precisely where the "normal Dutch people," whose voice the man with the Mozart haircut so badly wanted to be, are. No important Dutch politician has as little direct contact to everyday citizens as the self-proclaimed tribune of the people, who has been under protection 24 hours a day for the past 12 years. Wilders has conducted almost his entire campaign via his mobile phone. He tweeted as cleverly and radically as his role model, Donald Trump. But the American president didn't just use Twitter: He also got people excited at his election rallies, which provided celebratory photos of his supporters.

Wilders' public admiration for Trump was ultimately his downfall because the American's radical, chaotic policies go too far even for his own most loyal followers -- not to mention the many swing voters who had sympathized with him. Rutte recognized this -- and summarized it with one sentence: "Geert Wilders is chaos."

What Happens to Wilders Now?

He will keep going. For the Venlo native, this election outcome is the most bitter defeat of his political career. But give up? No way. Who could replace him? He's PVV's only member. And what else should the 53-year-old do for the rest of his life? According to his brother Paul, he barely has any friends left, and he has fallen out with parts of his family. Sooner or later, Wilders hopes, his time will come again. A new refugee crisis, a wave of violence carried out by foreigners, a terror attack or simply dissatisfaction with the new government would be sufficient to drive his poll numbers back up. Besides, the role of top opposition figure is tailor-made for him. And he doesn't necessarily need to be in the government in order to implement parts of his political agenda. "Wilders has once again pushed Rutte and the Christian Democrats a little further to the right," says van der Meer, the political scientist.

Does this Stop the Advance of Populism in the West?

Perhaps. Marine Le Pen recently swore that 2017 would be the year in which "the peoples of Continental Europe wake up." The Dutch are politically enlightened and flocked en masse to the voting booths. Only they didn't cast their ballots for Wilders. The presidential election in Austria in December had shown that a European domino effect is not inevitable. Nevertheless, Le Pen still has a shot at becoming the next French president. Her Front National is much more deeply anchored in various social strata, more politically tame and potentially acceptable to the majority than the Wilders' shrill one-man show in the Netherlands. The outcome in The Hague, however, is a setback for Le Pen. If Wilders had come out the winner, she could have argued that right-wing positions have now become acceptable in the European mainstream. Now she mostly has to hope that her likely main opponent, Emmanuel Macron, will make a mistake or face a scandal.

Wilders' defeat also portends badly for the Alternative for Germany (AfD), the country's own right-wing populist party. AFD has sunken in the polls since Trump moved into the White House and Martin Schulz was selected as the Social Democrats' candidate for chancellor. Party leader Frauke Petry had often appeared at Wilders' side in the hope that he would win the election. Now she has the same problem as he does: The subject that is her bread and butter, the refugee crisis, is disappearing from the headlines.

And What About the EU?

"Nexit," the Dutch exit from the EU, is no longer under discussion for now, though this idea was largely a fantasy of Wilders'. Hardly any country is as connected to its neighbors as the Netherlands, the trade hub of Europe. But many citizens see few uses for the EU beyond free trade. In their daily lives, they often see Brussels as a behemoth that brings them little. It is worrisome that in the province of Limburg, which shares a longer border with Germany and Belgium than it does with the rest of the Netherlands, fewer people commute over the border to work than did 40 years ago. The primary reason for this is that every country in Europe is in charge of its own social and taxation systems -- regardless of how well they fit with their neighbors'. As long as the people in charge in Brussels and Europe's capitals aren't able to make citizens more aware of the advantages of a united Europe, the EU won't emerge from its crisis. 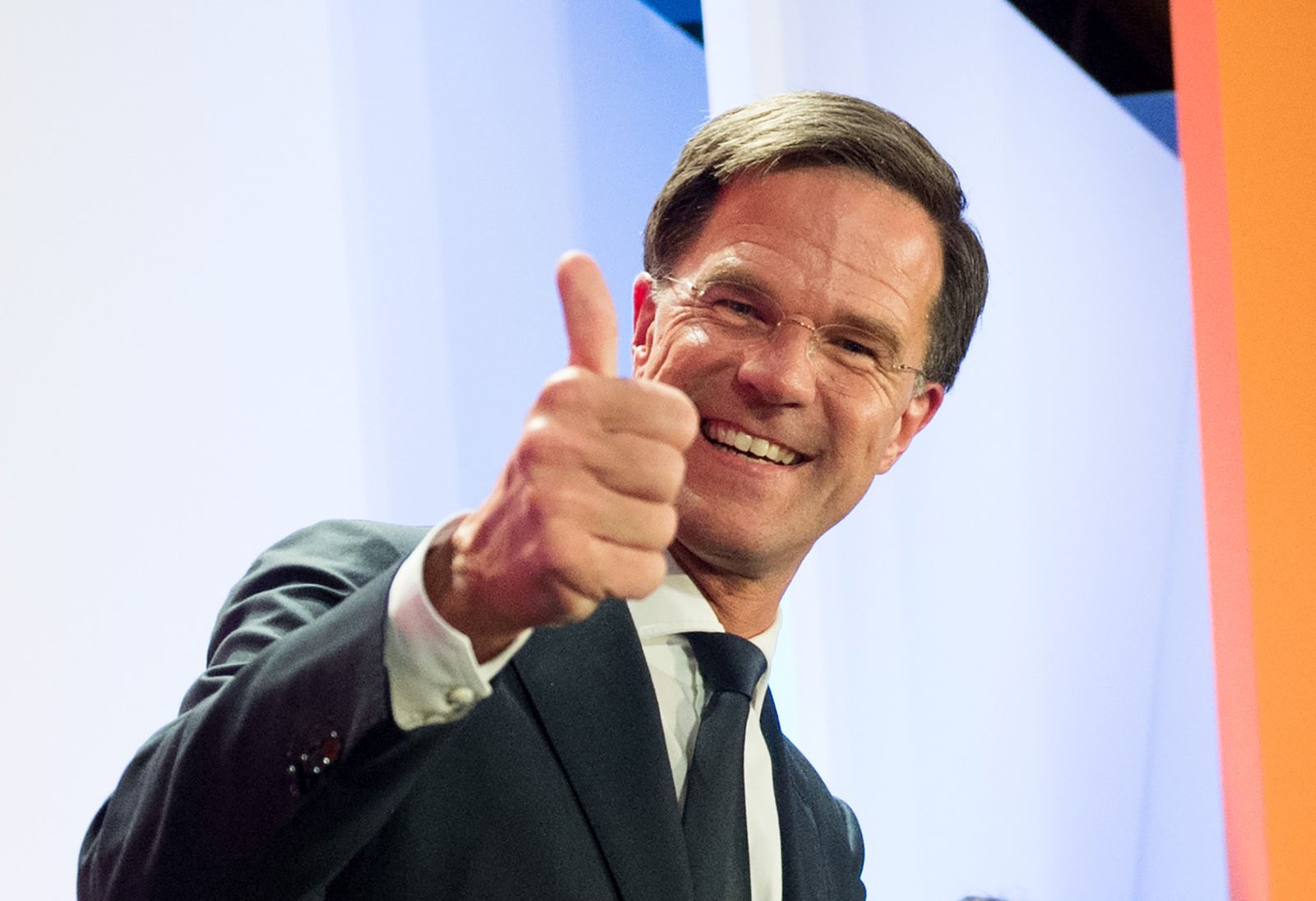