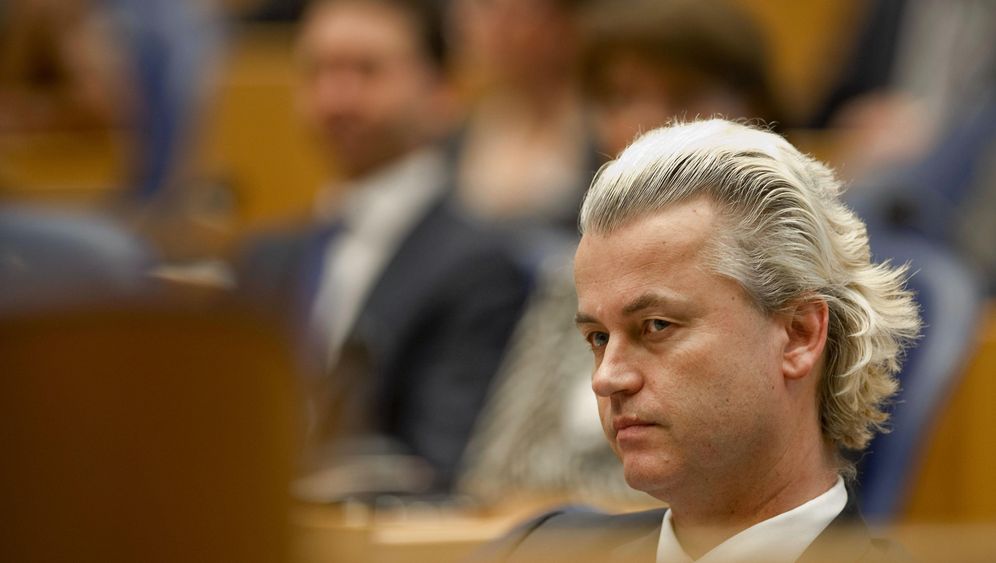 The press room in the Dutch parliament building in The Hague has been fully booked up for days for the scheduled meeting on Wednesday afternoon. The office responsible for handing out media accreditation already has a long waiting list. The meeting will be broadcast live on Dutch TV, and the whole world will also be able to watch online as right-wing populists Marine Le Pen, head of the Front National (FN) in France, and Geert Wilders, chairman of the Party for Freedom in the Netherlands, come together to talk.

The two politicians will savor the limelight. They want to finally be able to present themselves on the European stage as established representatives of the people. Wilders and Le Pen have a common cause that is not about national sensitivities, even though both see themselves as nationalists and do well as such in opinion polls at home. Rather, they have a common strategic goal in mind with regards to the European Union.

Wilders and Le Pen want to finally form a strong far-right faction in the European Parliament following the elections due in May 2014. Work toward such an alliance has been hampered up to now by disagreements. In 2007, a number of right-wing groups briefly formed an association under the name "Identity, Tradition, Sovereignty." But the group collapsed in disarray after Alessandra Mussolini, a member of Italy's nationalist, conservative Social Action party, described Romanians as "habitual lawbreakers," causing the Romanian members to withdraw from the bloc. Since then, the numerous euroskeptics, Europe haters and right-wing populist groups in the parliament have been agitating individually, or at most working together in loose pacts with grand names like the "European Alliance for Freedom."

Such a fraction, however, would provide tangible benefits, such as better funding and more speaking rights. Wilders has therefore been doggedly campaigning for an anti-European alliance: "It would be fantastic if we pooled our resources."

That is why he is moving ahead with a right-wing alliance on a European level, and not only with Le Pen. He visited the right-wing populist Sweden Democrats party, wooed Filip Dewinter of Vlaams Belang (Flemish Interest) in Belgium, and spoke with Heinz-Christian Strache, head of the Freedom Party of Austria (FPÖ). Leaders of the Lega Nord in Italy were also pleased with Wilders' charm offensive.

Wilders has simply played down the substantive differences that exist -- yet they are significant. Indeed, the Dutch politician asserts he does not want any "right-wing extremist and racist" parties in his movement. In particular, he has so far shunned radical groups like the British National Party, the Jobbik party in Hungary and Germany's National Democratic Party (NPD). But the FN continues to flirt with anti-Semitic ideas, no matter how moderate Le Pen tries to present herself as being. Wilders' Party for Freedom, on the other hand, stresses its pro-Israeli leanings.

Uniting Against the EU, Islam and Immigration

But for Wilders, an alliance is probably more important than such differences. He is trying to draw attention to themes that unite all groups on the right-wing margins, especially for what they oppose: Islam and immigration, Turkish entry into the EU, and the EU itself. The European dream has turned into a nightmare, says Le Pen. The united struggle is directed toward the superstate Brussels, insists Wilders.

Voices critical of the EU are also sometimes heard from among the ranks of the Alternative for Germany (AFD). With its anti-euro policies and partly right-wing populist beliefs, it only just fell short of winning representation in Germany's parliament, the Bundestag, in September's elections. The party was only founded a few months ago and is now hoping for seats in the European Parliament. The election in May presents only a 3 percent hurdle for representation, as opposed to 5 percent in Germany's parliamentary elections.

But the party has excluded the possibility of an alliance with the far right. "We want nothing to do with people like Wilders," says AFD spokeswoman Dagmar Metzger. They have also not received any request from him thus far.

Other influential euroskeptics, such as Nigel Farage of the United Kingdom Independence Party (UKIP), have given guarded responses to Wilders' advances. In particular, the alliance with Le Pen is seen as problematic.

Nevertheless, Wilders' plan for a right-wing populist faction is already making an impact. For one thing, there have been improvements in opinion polls: The FN recently came in first place in a French survey ahead of the European elections, with around 24 percent of recipients saying they would vote for Le Pen in May.

There have been other political benefits. When Europe was discussing a new asylum policy in the wake of the Lampedusa disaster, Manfred Weber, a member of the European Parliament for the center-right Christian Social Union (CSU), the sister party to Angela Merkel's Christian Democrats (CDU), said: "In view of the polls that predict up to 30 percent for euroskeptics in the new parliament, a more liberal immigration policy can currently not be introduced, because it would give the extremists even more of a boost."