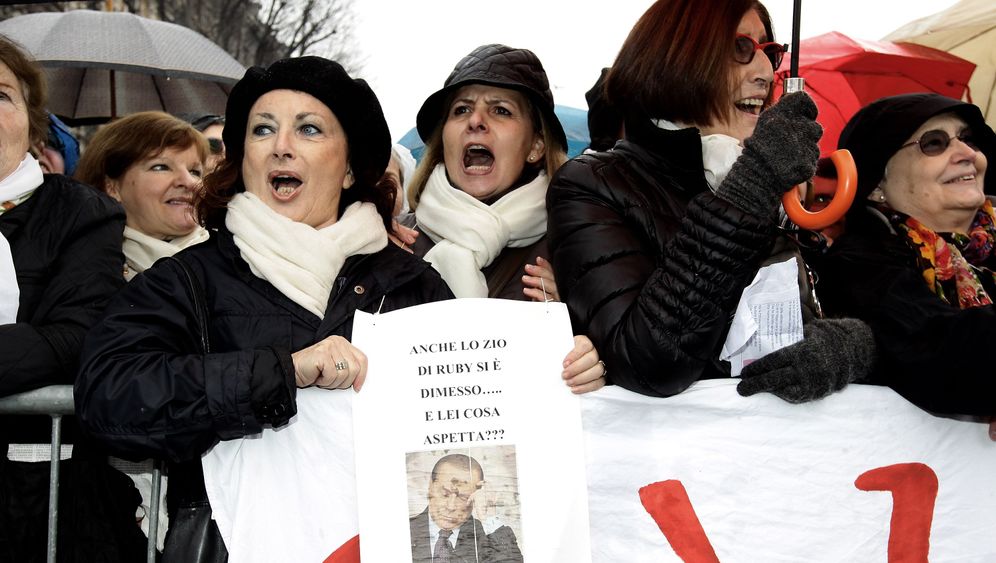 Some 220 years ago, Johann Wolfgang Goethe was having the time of his life. He traveled to Rome incognito and savored earth's delights to the full, literary historians say, enjoying wine, women and lively discourse. It may be that he had sex for the first time in the eternal city.

If he had been on Piazza del Popolo square, less than a hundred meters from his house in the Via del Corso 18, on Sunday afternoon, he wouldn't have believed his eyes. Once again, the Italians were debating the grand issues of sex, the might of men and morals, but this time they were speechless.

Tens of thousands of women stood in the early spring sunshine and observed a minute's silence for the dignity of their sex. Then someone shouted from a stage: "Se non ora, quando?" If not now, when? It was the motto of the afternoon. The demonstrators punched the air and shouted "Now! Down with Berlusconi, it's enough." Then they played Patti Smith's song "Power to the People," waved their banners and danced.

At least 30,000 people gathered on the Piazza del Popolo. It was one of the biggest women's demonstrations in years. Similar protests took place at the same time in 230 Italian cities, in front of Milan's Duomo cathedral, in Venice, Florence, on village squares in the south. The organizers said more than 1 million Italians took to the streets. There were even demonstrations abroad, in Tokyo, Brussels, London and Paris. The pent-up anger is palpable. Women -- once the most loyal supporters of Italian Prime Minister Silvio Berlusconi -- are screaming "Ora basta!" They've had enough.

Sick of Being the Butt of Male Jokes

They are rising up against what they regard as a hopelessly outdated, 1950s portrayal of women in the media and in politics these days: that women are pretty and docile and that there place is in the home, in charge of "la famiglia." They want their dignity back and believe Berlusconi has crossed a line. They are demonstrating because their prime minister threw "bunga bunga" sex parties, is alleged to have had an affair with an underage Moroccan women named Ruby and because the whole world is laughing at a pitiful Italy that can't get to grips with its problems -- runaway public debt, youth unemployment, the influx of migrants. "Italy is not a brothel!" they are shouting. "More bread, less games!" It sounds as if women are really going on the barricades, but will it do any good?

The demonstrators then read out statistics that show Italy as a developing country in terms of female emancipation. Ninety-percent of Italian women have a university degree, but fewer than half have a job. "We work harder than the men, we are paid less and have fewer political positions than anywhere else in Europe," says one speaker.

They complain about discrimination in the workplace, and about getting fired when they're pregnant. "One of Angela Merkel's first acts in office was to increase the number of kindergarten places," says one activist. "And what has Berlusconi done? He advises our daughters to get themselves a rich husband. What kind of country are we living in?"

The demonstrations are good news. But they don't change the fact that Berlusconi is far from fighting his last battle, contrary to claims in the Anglo-Saxon media. Silvio Berlusconi isn't finished -- that too became evident this weekend. Even before the demonstrations took place, he was ridiculing them and railing against his supposedly puritanical, humorless critics.

There were pro-Berlusconi demonstrations, too, of course. And Berlusconi naturally portrayed himself as the victim of a judicial system that, he said, was resorting to the same methods as the Stasi snoops in communist East Germany. Now he is even planning to take the case before the European Court of Human Rights because his right to privacy has been breached, says his foreign minister. It's the same old madhouse. But is this a revolution?

The protest march by Italian women was an attempt to restore a little decency and sobriety, it's part of fight against superficiality, egoism and the aggressive mood in the country. It is bitterly necessary. But it would be ridiculous to compare the protests to the Egyptian revolution, as some banners in Rome suggested. One read: "First Mubarak, now Silvio!"

The fact that Berlusconi got Ruby out of police detention by claiming she was Hosni Mubarak's niece could land him in court for abuse of power and is the only link to Egypt. Berlusconi, after all, was democratically elected, for the third time in 16 years. He won't be toppled by demonstrations or by judges who now plan to put him on trial. He will only be defeated at the ballot box -- if the Italians actually want to get rid of him.

But at this point, what alternative is there to him? Even the protests against Silvio Berlusconi are completely fixated on him personally -- as usual, everything just revolves around him. No one seems to be looking further ahead -- that's the bad news from Italy. When will the paralyzed opposition finally be able to field a counter-Berlusconi capable of ending his rule?

Whenever that does happen -- in an early election in May if the vote is brought forward, or in two years at the end of his term -- the Italians, and not just the Italians, have had enough of him.