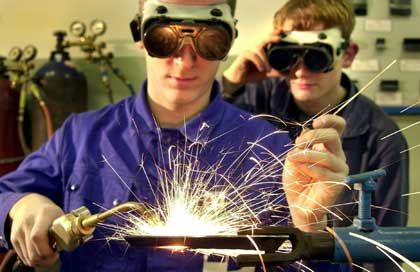 German workers rank sixth in the EU in terms of hours worked -- and third in terms of vacation days.

Europe is still divided when it comes to working hours. According to a recent study, the newest members of the European Union put in the most time on the job, while many of the Union's long-time members give their workers more time off and less time at work.

In a study published Wednesday by Dublin-based EU think tank Eurofound, official and reported work hours were compared across the EU. Europe's hardest workers, at least in terms of hours spent on the job? Full-time workers in Romania and Bulgaria, the EU's newest members, put in 41.7 hours a week. Germany ranked 6th, with workers reporting 41.1 hours a week spent at work.

The report, which analyzed statistical data from all of the EU member countries, found that the 15 pre-2004 members of the EU spend an average of 39. 5 hours a week on the job, while people in the 12 new member states work 40.6 hours on average. Of the top 10 countries, seven -- Bulgaria, Romania, the Czech Republic, Slovenia, Estonia, Latvia and Hungary -- joined the EU after 2004.

Western Europeans aren't all slackers -- the UK ranked third on the list, and Austria and Germany were both in the top ten. At the bottom of the list was France, where workers put in a not-so-grueling 37.7 hours a week.

The study also looked at hours in specific sectors, like retail and civil service. French salespeople work 35 hours a week, while Europe's least-busy bureaucrats are the Italians, whose civil servants spend 32.9 hours a week on the job.

Vacation time also varies dramatically from country to country. Swedes have a generous 33 days per year of paid vacation, while Estonians get just 20. Germans rank high here, too -- third on Eurofound's list, with 30 days per year.