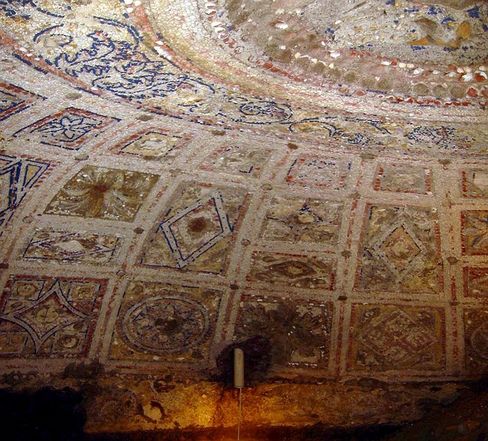 The alleged she-wolf's grotto: Has the navel of the world been discovered?

Tales abound of dolphins saving shipwrecked sailors and beefy dogs bringing first-aid to mountain climbers in distress. But at the mouth of the Tiber River, where the greatest military power of the ancient world rose to glory, animal love for wayward souls went even further.

Two boys, Romulus and Remus, were abandoned naked. Then a she-wolf came along and suckled the twins, saving them from starvation. As already established by a sort of state historical commission back in antiquity, this legendary lupine nursing took place just before the year 753 BC. Later, Romulus murdered his brother, founded Rome and ascended the throne of the Eternal City.

In modern Italy, which loves to bask in the glory of ancient Rome, every child knows the legend. All nations have their myths and symbols. While the French have their Gallic Rooster, the Greeks revere Mount Olympus and the British tell the tale of King Arthur, the citizens of that Mediterranean country south of the Alps venerate two infants -- fathered by Mars, the god of war -- who were set adrift in a basket on the Tiber.

Researchers of antiquity have known for a long time that there is not a word of truth to the legendary birth of Rome. In all likelihood, the nation's humble beginnings looked more like this: During the Iron Age, settlements consisting of straw huts were established on four of Rome's seven hills. In the late 8th century BC, these villages grew together to form a larger community. Apparently, there were also conflicts among the various chieftains.

But the legend is simply too fabulous to die. It is recounted in school textbooks and displayed on banners. There are stamps that portray the kindhearted wolf and tourist offices that attract visitors with the famous mythical tale.

Last week, the nation was again able to take comfort in its edifying history. During archaeological digs on the Palatine -- a hill with a magnificent view of the Circus Maximus -- where the luxurious palaces and villas of the Caesars and affluent Roman citizens once stood, researchers discovered a richly decorated cavern.

Directly under the palace of Augustus -- the first emperor of Rome (63 BC to 14 AD) -- lies a chamber "16 meters below the surface," says Andrea Carandini, a professor of archaeology at Rome's La Sapienza University and the site's chief excavator.

Then Carandini drops a bombshell. He says that he is "reasonably certain" that this vault is indeed the sanctuary referred to in ancient texts as the Lupercale, from the Latin for wolf. In other words, researchers have unearthed the nursery of Romulus and Remus, where the citizens of old Rome used to celebrate a bizarre annual ritual.

"This is one of the greatest discoveries ever made," said Carandini. The news unleashed a media storm. One of Italy's leading newspapers, La Repubblica , ran a two-page story rejoicing the discovery of the vault, proclaiming that the cradle of the heroes had been found. Germany's mass circulation Bild newspaper wrote that "one of the most famous myths of mankind" had been deciphered. Even the Frankfurter Allgemeine Zeitung mused that the "navel of the world" had been finally found.

"Italy surprises the world time and again with archaeological discoveries," Italian Culture Minister Francesco Rutelli proudly announced. "It is incredible that a myth has become a real place." Rutelli had invited an entire team of experts on antiquity to rubberstamp what Rome's top official for archaeology, Angelo Bottino, alleges to be the "find of the century."

Impressive claims. But are they true?

It almost seemed as if the bold media declaration made a week ago Tuesday was meant to make up for an earlier setback. Until recently, scholars believed that the famous sculpture housed in the Capitoline Museums, and portraying Romulus and Remus suckling under the wolf, was a masterpiece from the days of antiquity. New metallurgical analyses have revealed, however, that the statue is in fact a forgery from the Middle Ages. 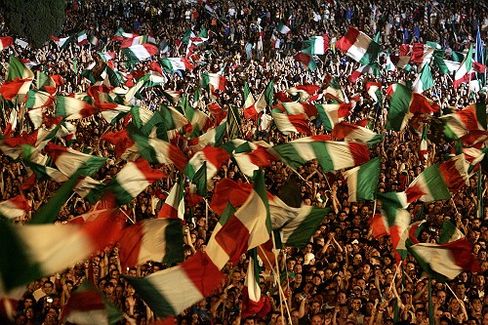 Soccer fans at the Circus Maximus near Palatine hill in Rome: The Italians have had little to celebrate since their World Cup victory in 2006.

This development has left many history-conscious Italians feeling disappointed. Things are generally not going too well in Italy. The mafia refuses to let up. After police shot a fan in mid-November, there has been no end to the unrest in soccer stadiums. What's more, when a Romanian man killed a naval officer's wife, a wave of racism rippled across the country. The government -- splintered into myriad miniature parties -- is far more paralyzed than usual. And the turmoil continues: In a surprise move, opposition leader Silvio Berlusconi has dissolved his Forza Italia. He wants to establish a new party.

So the headlines of the famous lupine cave emerge as a glimmer of hope -- at least on the horizon to a golden past. But even this archaeological sensation could lead to another sobering setback. Most authorities of ancient Roman history have serious doubts about the brash declarations.

"A sacred cave doesn't look like this," protested the head of the German Archaeological Institute in Rome, Henner von Hesberg, who also works on the Palatine. He thinks the roughly seven-meter in diameter grotto is more likely a "private dining room" that was linked to the upper floors of Emperor Augustus' palace via a staircase.

Adriano La Regina, Rome's superintendent of archaeology from 1976 to 2004, also rejects the theory. He surmises that the symbolic spot must be located farther to the west.

No one has entered the painted cavern because the structure is unsafe. Even when a special drill was used to penetrate the ceiling of the vault, large pieces of decorations fell to the floor. Consequently, researchers are now proceeding cautiously, with lasers and remote-controlled cameras.

And the debate continues. Critics say that the highly intimate nature of the decorations casts particular doubt on the claims.

The roof of the chamber is encrusted with seashells, marble and pumice stones, with mosaics visible in a number of places. There are rectangular panels filled with diamond shapes and flowers. Such ornate decorations were typical of the private chambers of nobles at the end of the Roman Republic, around 50 BC.

By contrast, the holy Lupercale resembled a dark and gloomy rock shrine. Candles flickered there, and priests guarded the entrance. Ancient documents report that a large bronze she-wolf with bared teeth stood in the interior.

This brutal ceremony does not match well with the refined decorations of the cavern. "You would expect a significantly different type of décor in a public religious space," says Hesberg, the German archaeologist. And there is no indication of sacral objects. The camera probes have been unable to spot any ritual vessels or an altar.

Project director Carandini dismisses such concerns. He is bringing the full weight of his reputation to bear in an effort to stifle all skepticism -- presumably also because he has managed to reel in considerable funding. The state has approved a new large-scale dig on Palatine Hill.

But doubts remain. The alleged lupine cave looks more like an upscale ancient snack bar. It is well known that many Roman Caesars, including Nero and Caligula, had small dining rooms that were built into the natural hollows in the rock under their multi-level palaces on the Palatine. During the summer, the imperial camarilla reclined in these cool caverns and were served delicacies such as fattened dormice and parrotfish on a bed of pureed dates.

Even the great Emperor Augustus, whose immense palace stood above the site, almost certainly had such an epicurean boudoir. Hesberg explains that "the floor space offers enough room for a triclinium," the Latin word for a room with three couches where semi-recumbent diners could enjoy their meal.

Could it be that the alleged cave of the founders of Rome is in reality where the great emperor feasted with a small circle of friends on roasted peacock tongues seasoned with fermented fish sauce?

This suspicion could soon be confirmed. The wall of the cave is emblazoned with a white eagle: the symbol of the Roman Empire during the reign of Augustus.