There's a number that illustrates the brutal dynamics of the hyperinflation of 1923 better than anything else. It's the number four. In the fall of 1923, prices were doubling in Germany approximately every four days.

Grotesque price increases have occurred in other countries and at other times, such as in Greece in 1944, China in 1949 and Zimbabwe in 2008. But hyperinflation has left behind deeper scars in Germany than anywhere else. Three generations after the collapse of the German mark, the fear of hyperinflation is more alive today than ever before.

The global glut of money as a result of the financial crisis has evoked painful memories of the great inflation that began with the beginning of World War I in 1914 and ended in chaos in 1923. Each new report on the need for billions in Europe's crisis-ridden countries reignites concerns over the stability of money. According to a poll by the Allensbach opinion research firm, Germans fear inflation even more than life-threatening diseases like cancer.

'A Repeat Is Unthinkable'

Worried citizens are fleeing into tangible assets, buying gold and silver bars, houses and apartments -- or at least books with grim titles like "National Bankruptcy is Coming!" The paradoxical aspect of the inflation debate is that so far only the warnings have been inflationary. The euro has proven to be more stable than the deutsche mark ever was. Economists are more concerned that prices will decline on a broad scale, crippling the economy. It makes no sense to invoke terrible visions of 1923 today, says economic historian Hans-Joachim Voth. "A repeat is unthinkable," he notes. The Germans suffer from a sort of "collective psychosis," concludes Voth, who teaches in Barcelona.

Jens Weidmann, president of the German central bank, the Bundesbank, also views the inflation of the 1920, along with the 1948 currency reform, in which Reichsmark savings were converted to deutsche mark at a ratio of 100 to 6.50, as "historically unique events." Both, says Weidmann, were primarily a consequence of paying for the war by printing money. And, according to Weidmann, they also highlight the risks that occur "when a bank subordinates the goal of securing monetary value to securing the solvency of the state."

A later phase in economic history is of greater importance to the president of the Bundesbank. "For us today, the lessons of the 1970s and early 1980s are far more important, because the independent Bundesbank was more effective than other central banks in controlling the inflation triggered by the oil price shocks." So why do citizens still react so sensitively, if not hysterically, when it comes to 1923?

The 'Delirium of Billions'

Perhaps the most important reason is that the middle class suffered the most from the hyperinflation of 1923: white-collar workers, government employees and the self-employed, all diligent savers, who became completely impoverished and drifted into the "delirium of billions," as the later Foreign Minister Walter Rathenau described the state of emergency.

Families today still remember the horrifying reports of what once happened to grandparents and great-grandparents. The fate of someone like Berlin author Maximilian Bern illustrates the extent of despair.

In 1923, Bern withdrew his savings, more than 100,000 marks, from the bank. But 100,000 wasn't much compared with the 2.5 quintillion marks in circulation at the end of October. Years earlier, the money would have been enough to pay for Bern's retirement, but now it was worth no more than the price of his last subway ticket. Bern went home, locked his door and died of hunger.

Doctors, teachers and professors had not only lost everything they owned, but also their confidence in the state. In 1914, many had gone to war with enthusiasm, and they had bought bonds, which generally yielded a five-percent return. The government collected 98 billion marks, but not a pfennig of the money was repaid.

A Double Loss of Confidence

People felt cheated, both of victory in the war and their money in the bank. The same bitter experience was repeated a generation later, when the Third Reich came to an end.

This double loss of confidence shaped the civil society of the postwar period. Its members yearned for stability and order and were sharply opposed to experiments, especially with their money. This need for security -- in other words, their aversion to risk -- is practically proverbial to this day in Germany.

A pronounced emphasis on security in monetary matters also shapes behavior in the business community. Particularly companies in key industries, such as machine building and plant manufacturing, have a very strong interest in a stable currency, because of their need to estimate long-term costs. Years often pass between the receipt of an order and the delivery of products.

"We need patient capital for our type of production," says Werner Abelshauser, an economic historian from the western city of Bielefeld. For this reason, he explains, German business owners still harbor a deep fear of inflation. Southern European economies are more trade-oriented, says Abelshauser, and they have shorter turnaround times and are therefore less sensitive to inflation.

An Obsessive Pursuit of Stability

But probably the greatest impact of the experiences of 1923 is on German monetary policy, even if Bundesbank President Weidmann tends to downplay this today. The Bank of the German States, the precursor to the Bundesbank, also set clear priorities. The stability of the currency was paramount, while stimulating the economy and fighting unemployment were secondary. The first Bundesbank president, Wilhelm Vocke, was all but obsessive in pursuing this course.

Vocke became the director of the Reichsbank, Germany's central bank, in 1919 at the age of only 33 and would stay until 1945. He was appalled at how, in 1923, the central bank leadership focused its energy on the smooth operation of the printing presses, and at how spending policy in the Third Reich led "straight to inflation." Vocke was subsequently forced to leave the Reichsbank. After the war, he was in a perfect position to help launch the new currency.

In 1948, the Allies had decreed that the Bank of the German States was not to be "subject to the directives of any political entities or public agencies, with the exception of the courts." It was something then Chancellor Konrad Adenauer could never accept. He persistently tried to exert pressure on Vocke, such as in May 1956, when the Bundesbank tightened the reins as the economy threatened to become overheated. Vocke, as self-confident as the chancellor, remained unimpressed. The chancellor, he later joked, was "a complete novice in this difficult field. I let him talk." The Bundesbank's independence promoted so much confidence in the currency that the Germans, despite their fears of inflation, became a nation of savers.

The Irony of History

"Independence and the clear mandate to ensure price stability remain the conditions of success for a central bank," says Weidmann. "This also, and particularly, applies to the euro system." Of course, this makes him part of a minority on the executive board of the European Central Bank (ECB), because the ECB is literally flooding markets with cheap money, even to an "unlimited" extent if necessary, as ECB President Mario Draghi has stated.

This is the irony of history: Washington and Paris, the Western wartime allies, once decreed complete independence and strict budgetary discipline for the Bundesbank, but now the mentors are violating their own principles. 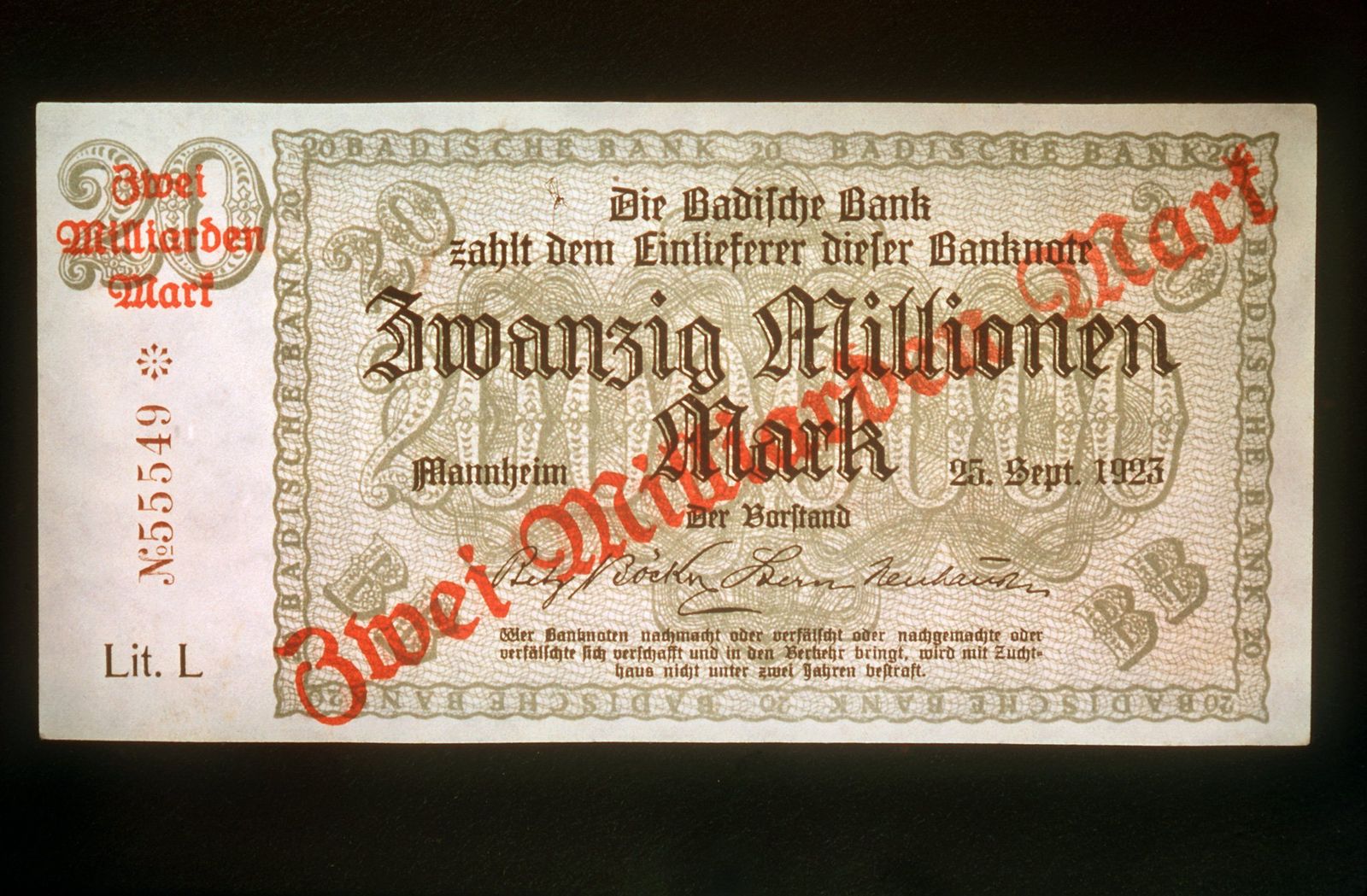 Inflation in action: This photo shows a German mark note from 1923 with a printed value of 20 million. During hyperinflation, it was stamped to become 2 billion marks.