"The war changed everything." This statement by the late British historian Tony Judt contains the kernel of modern-day Europe. It was the war that made possible an extended period of peace. Things had to get extremely bad before they could get good again. For the last 75 years, there has been peace on the Continent, with just a few exceptions.

What does that mean for the most important of all questions, the question of war or peace? At the moment, it doesn't look at all as though the long period of peace is going to come to an end. There is no reason for alarm. But if the direction of European history is changing, we should take a close look at what that could mean. Not in the immediate future, but in the long term. History is a snail that persistently crawls along its path.

Exactly 80 years ago, the war that changed everything began -- on Sept. 1, 1939, with Adolf Hitler's Germany invading neighboring Poland. Almost six years later, more than 60 million people around the world were dead as a result of the violence, huge portions of the Continent were destroyed, millions of Europeans had been forced from their homes and millions more were plunged into poverty. A state of shock reigned.

It was the moment at which the direction of history shifted, moving in the right direction at the time. Europe managed to break through the inevitability that old rivalries necessarily ended in war.

The primary reason was shock. A total war of this size had never been seen before. At the Congress of Vienna from 1814 to 1815, the great powers had sought to confine their wars, restricting them to specific regions and limiting them to the killing of soldiers. And in ensuing conflicts, the number of civilian victims remained relatively low and cities were largely spared. That was the case, for example, in the three wars that led to the first German unification -- against Denmark, against Austria-Hungary and, to a large extent, against France. At that point, Reich Chancellor Otto von Bismarck sought to establish a balance of power among the great powers, but the direction of history changed when he was forced out in 1890. The countries began focusing more on rivalry and a large war became just a matter of time.

It arrived in 1914 and resulted in 15 million deaths. But the fighting was largely limited to the frontlines, where the destruction was complete -- primarily in eastern France and in Belgium. The civilian population suffered from shortages and hunger, but most cities remained intact. Once the war ended on Nov. 11, 1918, Germany looked largely the same as it did before the war.

The shock wasn't big enough. Just 21 years after the end of World War I, World War II broke out -- and all restraint was abandoned. It ended when the U.S. dropped atomic bombs on the Japanese cities of Hiroshima and Nagasaki on Aug. 6 and 9, 1945. The shock could hardly have been greater.

Postwar politicians in Western Europe drew the correct conclusions: The national rivalries that had triggered the two world wars had to be eliminated. Germany's neighbors believed the country that had brought forth Nazism needed to be tamed, needed to be integrated because nationalism there had proved to be particularly virulent. That was met with a West German mood that was a combination of resignation, intimidation and shame at having caused the war and carried out the Holocaust.

The result was that Western Europe could slowly grow together. To ensure peace, Eastern Europe was left to the Soviet Union and the Soviets imposed a brutal system of socialist dictatorship. The Cold War broke out, a systemic rivalry pitting the United States against the Soviet Union, together with their allies. But the shock of World War II and the fear of nuclear escalation guaranteed peace on the Continent, a peace that has endured until today.

European soldiers, to be sure, were sent into battle. France fought to maintain its colonies in Algeria and Vietnam, Britain fought Argentina over the Falkland Islands in the South Atlantic. Both countries joined the U.S. in a number of wars, as did the Italians, Spanish and Germans, particularly in Afghanistan.

Nothing with Comparable Urgency

The shock wasn't enough to eliminate war entirely, but it did help limit the violence to regional conflicts. Pacifist elements in society that insist the soldiers be brought home have also played a role, though more so in Germany than in the U.S. Until World War II, the populace tended to be more euphoric when it came to waging war.

Furthermore, into the late 1990s, politics was largely practiced by men and women who had actually experienced World War II themselves. A viscerally felt attitude of "never again," one rooted in their own pasts, marked the German chancellors up until Helmut Kohl and the French presidents up until Jacques Chirac. The end of their tenures has a lot to do with the European project having lost its momentum.

The influence of eyewitnesses has faded over the years and lost influence. In the 2000s, the eternal European peace seemed like such a given that the idea of peace was no longer sufficient as a justification for deeper European integration. New ideas were sought, but nothing was found with comparable urgency.

Because the shock has faded, commitment to the nation-state has once again been given space to grow. In his recent book "Der Gewaltsame Lehrer" (The Violent Teacher), historian Dieter Langewiesche describes the primary reasons behind modern wars in Europe. One is the establishment of nation-states in the 19th century, such as in Greece, Italy and Germany. "There are no nations without war, no nation-states without war," Langewiesche writes.

But even after the trauma of World War II, the national question was still able to trigger war in Europe, as could be seen in the breakup of the multiethnic country of Yugoslavia following the Cold War. For other countries, World War II had clarified the situation because one of its consequences was "ethnic cleansing." It caused suffering to millions, but it aided the cause of extended peace in Europe.

That's what makes such observations so difficult to take. The horrors of war can have positive effects on subsequent generations. Although that doesn't necessarily mean that the high price was justified. It is impossible to know how history would have unfolded absent World War II.

In today's Europe, nation building doesn't play much of a role outside the yearnings of separatists, such as those in Catalonia or Flanders. Ukraine is divided into an eastern half and a western half, a situation Russia has exploited. The result is a combination of war and civil war, but the conflict has remained localized. Revanchism has likewise not played much of a role thus far in postwar Europe, with borders as they now stand largely accepted.

Nevertheless, the national idea, that has been responsible for so many wars, is once again on the advance. During the euro crisis, European solidarity suffered significant harm and the refugee crisis has also left a mark. It's not the borders that are being questioned, but the openness of those borders. And the British even want to be all on their own again; Brexit is a clear expression of nationalism.

Langewiesche identifies revolutions as an additional trigger of war. Following the 1789 rebellion, the French revolutionary government waged a civil war internally and war with its neighbors externally. It was only after Napoleon's defeat at Waterloo in 1815 and the 1815 Congress of Vienna that peace descended on the Continent. The Russian Revolution in 1917 also resulted in a long civil war that attracted the intervention of other countries.

But where do we stand now? It certainly doesn't look as though we will soon be facing a revolution, in the sense of violent systemic change. But liberal democracy, which once seemed to be an immovable element of the European consensus, finds itself under pressure. It doesn't exist at all in today's Hungary and it is disappearing in Poland. In Italy, liberal democracy is threatened and right-wing populism in many other countries is proving a difficult challenge to the system.

Within the European Union, there are initial signs of systemic rivalry: liberal democracy versus authoritarianism. And systemic rivalries, too, have paved the way to war in the past: monarchy against democracy; fascism against democracy; fascism against socialism. In the Cold War, socialism found itself facing down democratic capitalism, and the two systems fought against each other in proxy wars staged in the developing world.

Thus far, the rule has held that democracies do not fight wars against each other. That, too, helps protect European peace. But a dark future scenario could, for example, foresee an authoritarian country in Europe allying itself with a China as a protector state. That would mark the end of the rule.

All of that is far off. But the fading shock of World War II, the return of national thinking, the growing threat to liberal democracy and the possibility of systemic rivalry in Europe: Those are four factors that tend to make war more possible. The snail is crawling in the wrong direction. Stopping it has once again become Europe's duty -- and remembering the horrors of our past is a first step. 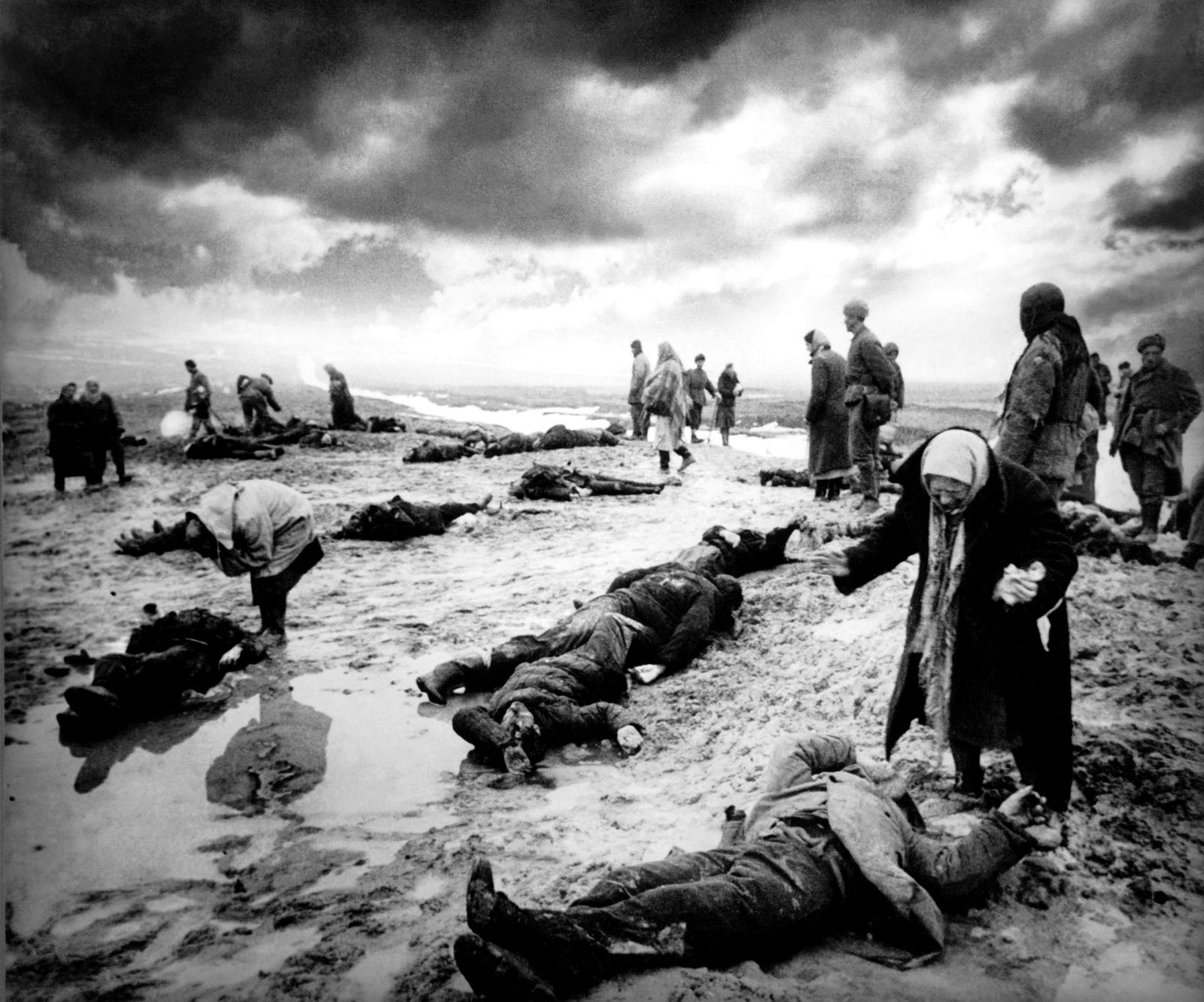 Family members seek to identify their fallen relatives in Crimea in 1942.