Chancellor Angela Merkel will exhort her Greek counterpart, George Papandreou, to stick to his budget reform pledges at a meeting in Berlin on Tuesday ahead of Germany's crucial parliamentary vote on the expansion of the euro bailout on Thursday.

Pressure on Merkel is mounting, with rating agency Standard & Poor's warning that Germany itself could suffer a ratings downgrade as a result of its efforts to tackle the euro crisis, and her junior coalition partners, the pro-business Free Democrats (FDP), threatening not to back the bailout law.

The German parliament looks certain to approve the increase in the size and scope of the European Financial Stability Facility (EFSF) on Thursday because the main opposition parties have said they will support it. But it is uncertain whether Merkel will be able to muster her own center-right majority. If she doesn't, and has to rely on opposition votes to pass what is widely regarded as the most important piece of legislation of her second term, her authority will be seriously weakened.

It would trigger opposition calls for her to step down or seek an early election. She would likely resist both options, but her scope to take bold new steps to contain the crisis with fresh German guarantees would be seriously curtailed.

Hermann Otto Solms, a finance expert in the FDP, warned Finance Minister Wolfgang Schäuble not to agree to increasing the impact of the bailout fund through leveraging -- a process that would enable the EFSF to use its assets as collateral to borrow money from the European Central Bank and boost its scope to fight the crisis.

As a result of leveraging, the exposure of euro zone governments to the bailout fund would be even higher than the €780 billion ($1.05 trillion) it is being increased to. Germany alone will shoulder €211 billion of that.

European officials aired the possibility of such leveraging over the weekend at meetings of the International Monetary Fund and G-20 in Washington. Euro-zone finance officials told their G-20 colleagues they would boost the flexibility of the rescue fund and "maximize its impact."

Solms told Die Welt newspaper on Tuesday that if Schäuble didn't make clear immediately "that there won't be any leveraging, we won't vote for the law." The FDP has 93 parliamentary seats. If they all vote against the bailout fund increase, the blow to Merkel's coalition would be potentially fatal.

Investors want the fund to be big enough to shore up European banks and help debt-laden euro zone governments. But the speculation about leveraging has led to further tensions in the coalition, which Merkel can ill afford 48 hours before the vote.

Opinion polls show a majority of Germans are opposed to further bailouts of high-debt nations and are increasingly worried about footing the bill for the past profligacy of their southern European neighbors. Many conservative and FDP lawmakers are likewise concerned that the planned expansion of the EFSF, and its new scope to purchase government bonds issued by ailing countries, will lock Germany into a massive transfer of wealth.

Criticism From Obama, Promises From Papandreou

US President Barack Obama piled on the pressure on Monday when he said the crisis "is scaring the world" and urged euro-zone leaders to act quickly. "They are trying to take responsible actions but those actions haven't been quite as quick as they need to be," Obama told a citizens' meeting in Mountain View, California, in clear criticism of Europe's crisis management so far.

Menwhile, Greek Prime Minister Giorgios Papandreou, speaking in Berlin on Tuesday, reiterated his pledge to reform the Greek budget and economy -- a precondition for receiving further aid from euro-zone partners and the IMF.

"I can guarantee that Greece will live up to all its commitments," Papandreou said in a speech to industry leaders in Berlin. "I promise you we Greeks will soon fight our way back to growth and prosperity after this period of pain."

He said Greece deserves "respect" for its efforts so far. "Greece has the potential, Europe has the potential," and can achieve it through global cooperation. "We are not a poor country, we're a country that has been governed badly."

Behind closed doors, officials in Berlin and elsewhere in the euro zone have been making contingency plans for a Greek default. But leaders have been playing for time, aware that a default now would lead to market turmoil and engulf other high-debt nations such as Ireland, Portugal, Spain and Italy. The aims is to wait until Europe has the mechanisms in place to handle the impact of a Greek bankruptcy on other nations and on the European banking sector.

'Not a Single Person'

SPIEGEL reported in its latest edition that the European Stability Mechanism, the permanent bailout fund for the euro zone which is due to replace the EFSF, may be introduced in 2012, a year earlier than planned.

Speaking on public TV station ARD on Sunday night, Merkel insisted that a Greek default now was not an option. "We need to take steps we can control," Merkel said, drawing a parallel between the Greek situation and that of Lehman, whose bankruptcy helped trigger the global financial crisis.

"What we can't do is destroy the confidence of all investors mid-course and get a situation where they say that if we've done it for Greece, we will also do it for Spain, for Belgium, or any other country," she added. "Then not a single person would put their money in Europe anymore." 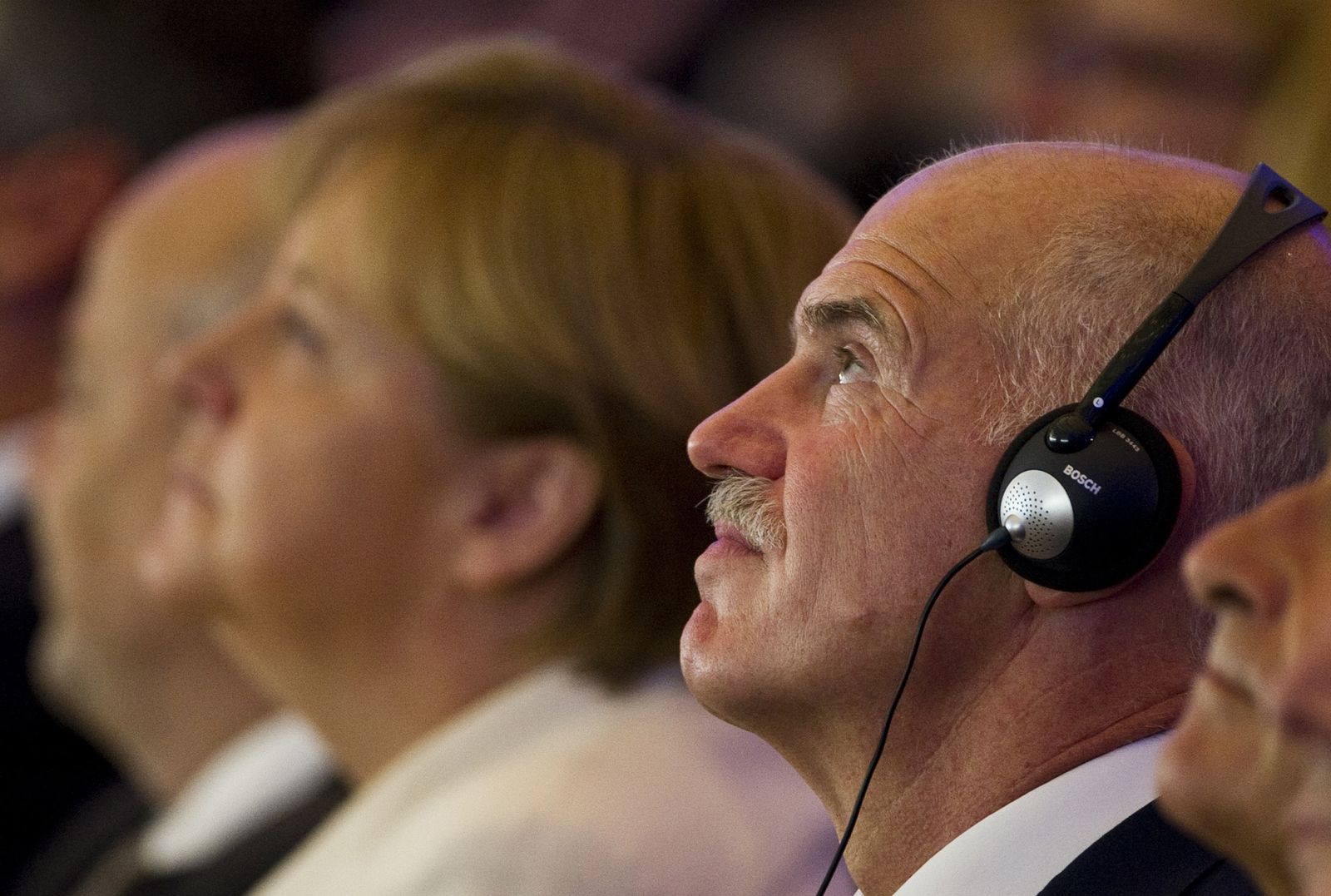 Greek Prime Minister Giorgios Papandreou is in Berlin on Tuesday for talks with Chancellor Angela Merkel.