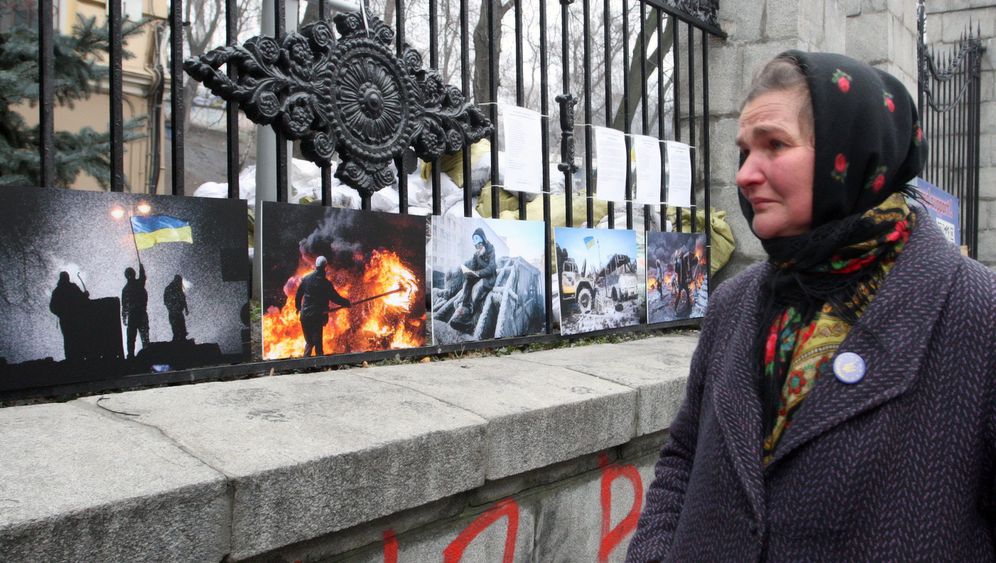 Photo Gallery: Looking for a Way Forward in Ukraine

One hundred and fifty people are standing in front of the regional administration building in Dnipropetrovsk. They are packed into thick down jackets with stocking caps pulled low over their foreheads, many are wearing balaclavas. The thermometer stood at a frigid minus 12 degrees Celsius (10 degrees Fahrenheit) in the morning -- but they remain here day and night nonetheless.

The square is sealed off with barbed-wire and a special police unit stands by. There are several posters proclaiming: "Fascism Won't Win." The "fascists" referred to are those opposing Ukrainian President Viktor Yanukovych and the local powers-that-be are afraid that the demonstrators could storm their offices. Hence the police protection and the 150 thugs-for-hire with their baseball bats and clubs. They are there to defend the will of the people. Dnipropetrovsk has long been a bastion of support for Yanukovych.

The city is Ukraine's fourth largest, with a population of 1 million, and is home to much of the country's arms industry. Rockets and satellites are produced in the city as well.

But there are government opponents here too. More than 1,000 of them have gathered in a nearby park. Storming the administrative headquarters is clearly not an option; in comparison to the protests in Kiev, 1,000 demonstrators are not many. But in Dnipropetrovsk, that is enough to sound the alarms. On this Thursday in February, though, the situation remains calm.

Just a few weeks ago, only a dozen protesters at most had found the courage to take to the streets. But since opposition leader Vitali Klitschko and his allies called for a "second front" to be opened in eastern Ukraine, which tends to be loyal to the Yanukovych government, pro-Europeans have begun demonstrating in cities like Kharkiv, Zaporizhia and Dnipropetrovsk.

Nothing More to Negotiate

Indeed, only Kiev has remained calm on this day. The president has flown to Sochi for the Winter Olympics and to meet with Russian President Vladimir Putin. During his absence, the opposition has suspended negotiations with the government camp.

The government, for its part, is acting as though there is nothing more to negotiate. Opposition demands have been met, Yanukovych's people claim. Plus, they say, Klitschko and Co. no longer represent the interests of those protesting in Maidan Square. Other, more radical leaders have long since taken over, the government says.

The president of the country's parliament has followed suite, saying that a new constitution, which protestors have demanded, cannot be adopted before September. "It needs time," he said. And acting Prime Minister Sergei Arbuzov said that the conflict was slowly cooling down.

If only that were the case. The country still hasn't replaced the government which resigned en masse at the end of January and each day it slides a bit further towards bankruptcy. Even the smallest of sparks would be enough to trigger a new flare up of hate and violence. Yet those currently in power are trying to create the impression that everything is going according to plan.

Yet they know that the situation is precarious. Still, Yanukovych continues to avoid making a decision. Should he play the hardliner and crush the protests or should he pave the way for new elections? He has done nothing but waffle and delay -- for 10 straight weeks.

There is one person who may soon run out of patience: Vladimir Putin. Even as the West believes that President Yanukovych is a friend of Russia's, Moscow has long since had enough of him and the Kremlin would rather be rid of him sooner than later.

Russian media outlets have become increasingly strident in their demands that the Maidan Square protests be brought to an end. Alexander Prokhanov, a Russian author loyal to the state, recently traveled around Ukraine only to say on talk shows after his return that Yanukovych is a "traitor" because he has done nothing to beat down the protests. He is afraid of spilling blood, Prokhanov scoffed, even as "the wave of the revolution" destroys Russian civilization.

Until Thursday of last week, one could ignore such sentiments as the rambling of an ultra-nationalist Russian. But on that day, the Kiev newspaper Kommersant printed an interview with Sergey Glazyev, Putin's official advisor on Ukrainian issues, in which he made the same claim.

Instead of defending the state, Kiev is negotiating with revolutionaries as though they were law-abiding citizens, Glazyev raged. He accused the protesters of being controlled from abroad and said they received $20 million each week from the United States. He added that the Americans were training rebels on the grounds of their embassy in Kiev and were promoting a violent overthrow of the Ukrainian leadership. "In a situation where a power is confronted with a coup attempt, it has no other option" than to use force," Glazyev said.

One can imagine what Putin might have told Yanukovych in Sochi if a man like Glazyev is calling for blood.

In Russia, it is simply the case that few can imagine that tens of thousands of people would stay on the streets and endure bitterly cold temperatures just to demand fundamental democratic rights and a fair distribution of power. Furthermore, the Kremlin is concerned that what is happening in Ukraine could spread to Russia and reanimate the country's opposition. That too explains why Putin sees the Ukrainian president as a failure.

His advisor Glazyev says that those in power in Kiev are simply "afraid for their billions" and would do nothing that could get them in trouble with the West. On that point, he could be very close to the truth. Not just Yanukovych and his family have accumulated great wealth in recent years. Many of his closest confidants have as well. Every second Ukrainian is convinced that the country's leadership has shamelessly enriched itself.

Still, many were surprised at the audacity of ex-premier Mykola Azarov, who traveled to Vienna immediately after he was relieved of office to get his business affairs in order. He is the same man who torpedoed Ukraine's rapprochement with the European Union. Azarov's son Alexei, a member of Ukrainian parliament, owns a villa in the Währing suburb of Vienna in addition to other properties, a fact that was confirmed by Austrian businessman Reinhard Proksch. Proksch manages the assets of millionaire clients in Vienna, London and Vaduz.

Asparov's daughter-in-law Liliya is also active in Vienna. Austria's Der Standard newspaper reports that she has a 50 percent stake in Publishing Deluxe Holding, a company the puts out glossy magazines in Vienna, Dubai and St. Moritz for people with an upscale lifestyle.

Vienna is considered to be a hub for wealthy Ukrainian investors, a fact also illustrated by the case of the Klyuyev Brothers. Multimillionaire Andrei Klyuyev was appointed at the end of January by President Viktor Yanukovych as his new chief of staff. As the head of the Security Council, he ordered the forceful clearing of protesters from Kiev's Maidan Square on Nov. 30. His brother Serhiy has a seat in the Ukrainian parliament with Yanuvoych's party and is a member of the supervisory board of the National Bank of Ukraine.

The Klyuyevs used to be the majority owners of Active Solar. The company, which is registered in Vienna, is Ukraine's leading solar power enterprise and is believed to have been given considerable preferential treatment and tax advantages from the government. Now Active Solar is also controlled by Proksch, who told the Standard he holds the shares as a proxy for Serhiy Klyuyev's son-in law.

Few in recent years have risen into the league of the richest Ukrainians as quickly as the Yanukovych family. Yanukovych's eldest son Alexander, educated as a dentist, has built up a network of companies that managed to secure contracts to the tune of €5.5 billion from the state over the past two years. The contracts range from the construction and mining technology industries to railways and power generation equipment.

It is believed that Yanukovych senior controls numerous financial operations through a straw man in Kharkiv, Ukraine's second largest city. The Yanukovych clan has even managed to push Donetsk-based entrepreneur Rinat Akhmetov, previously the country's most powerful oligarch, down to No. 2 on the list of Ukraine's richest men.

Nevertheless, Akhmetov, the owner of the Shakhtar Donetsk football club and co-owner of over 110 banks, mining, energy and media companies, could emerge as a key figure in finding a solution to the crisis in Ukraine. Around 50 members of parliament in the governing party are aligned with Akhmetov and oligarch Dmytro Firtash, who dominates natural gas trade with Russia. Their votes could quickly turn away from Yanukovych.

Particularly given that Geoffrey Pyatt, the US ambassador in Kiev, recently invited Akhmetov to a meeting at his residence during which the diplomat threatened to freeze the oligarch's bank accounts in the West if protesters were violently removed from the Maidan. He wanted Akhmetov to exercise his influence on Yanukoych so the crisis could be solved peacefully.

In the wake of that meeting, Akhmetov declared on his website that the use of force against the protests would be a mistake and that compromise should instead be forged at the negotiating table. Other oligarchs have also since publically expressed their sympathies for the Maidan Square protesters because they don't want to threaten their business ties to the West.

Regardless what the Americans or the oligarchs want, though, Russia still has greater leverage. Inside the Kremlin, officials are taking a relaxed approach to developments, even as the Ukrainian economy deteriorates by the day. Last week, Ukraine's currency, the hryvnia, plummeted to a five-year low and the National Bank's currency reserves are fast disappearing.

Furthermore, although Russia may has decreased the price of natural gas deliveries, Ukraine must still service some €2.5 billion worth of debt to Moscow this month. The country doesn't have the money, and Yanukovych has been forced to ask Putin for yet another deferral.

That, of course, is the kind of development that pleases the Kremlin. Even if the Kremlin is unable to sway Yanukovych to bring a forceful end to the protests, observers in Moscow believe Ukraine will fall into Russia's lap anyway.