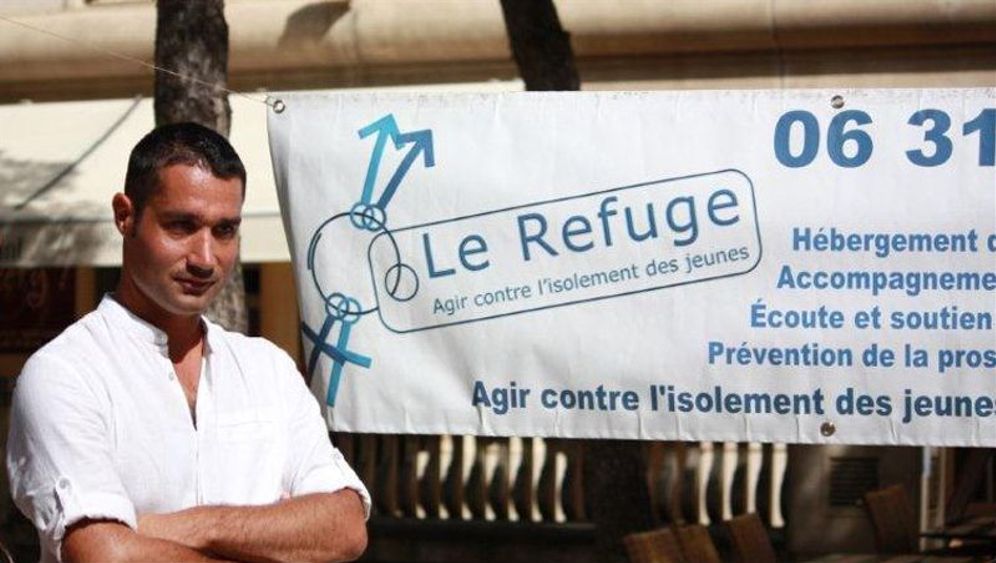 Amine (not his real name) cannot forget the last words he heard from his father. Six words that destroyed his life. "You are no longer my son."

That night, the 23-year-old couldn't sleep. At dawn, as his family slept, he slipped out of the house. He didn't say goodbye to anyone -- not to his mother, or to his sisters. At 7 a.m. he stood with a packed suitcase at the train station, waiting for the train to Paris.

Amine's father had rejected him because he is gay. There was no way back.

Newly arrived in Paris, Amine wandered through the street, not sure where to go. On the Internet, someone finally offered him a place to stay. But it was dirty and stank. And as Amine went to sleep one night, the stranger forced himself into his bed.

Three days later, Amine moved out, and was on the street again. Exhausted, he spent the night on a park bench. When he woke up the next morning, he realized someone had stolen everything from him: his wallet, cell phone, passport and money.

Three weeks later, Amine again had a roof over his head, his own room and a clean bed at a home in Montpellier run by an organization called Le Refuge. The organization, France's only refuge for gay and transsexual youth who are abandoned by their families, offers 22 rooms to desperate young people like Amine.

For up to six months, 18- to 25-year-olds can live in one of Le Refuge's homes in Paris, Lyon and Marseille, complete with educational, medical and psychological support. Here, they can finish their schooling, search for jobs and start to build a new life.

Le Refuge's main office in Montpellier, which also serves as a common room for the young people who live here, has two computers, a threadbare couch, a refrigerator and a microwave. Flyers on the walls talk about AIDS prevention, vocational counseling and other opportunities to get help.

Since its founding in 2003, Le Refuge has cared for about 200 young people, including 80 in the last year alone, says Nicolas Noguier, 33, who is the organization's founder. About 70 percent of the people living there are young men. Most come from Muslim families.

When new arrivals show up, they are often physical and mental wrecks. Many have muddled through life on the street, dazed by drugs and forced to sell their bodies. Others have been threatened with death. They come to Le Refuge, desperate and shocked. People have shown up with the remnants of their prior lives packed into two garbage bags. Nine of them, including Amine, have told their story in the 2010 book "Casse-toi!" ("Get out!"), from the noted French author Jean-Marie Périer.

Those who seek a place at Le Refuge commit to weekly counseling sessions, where they get help from a psychologist. Five volunteers help the youths with their daily needs and help them bring a bit more structure to their unstable lives.

Although the victims come from many places and different social backgrounds, around half of them come from strict religious households, such as Amine.

Amine used to live with his mother, father and sisters in Alençon in northwestern France. His parents came to France from Morocco and are both extremely religious. His dad is a Muslim, his mother Christian. He is authoritarian, she is subservient.

Amine's life was carefully organized. His mother and father had clear expectations for their son: work, house, marriage, wife and children, who should be named after their grandparents.

When Amine realized at the age of 14 that he likes boys, he knew it wouldn't fit into the life his parents envisioned for him. He hid his feelings from his family and pretended to be heterosexual. At first he was amazed that nobody figured it out. He felt that just his slight stature and delicate facial features were enough to reveal his sexuality.

But the fraud ended when his parents overheard him exchanging intimacies with his boyfriend on the phone. His father was infuriated. But before he spoke to his son, he closed the window -- he didn't want the neighbors to know about it. Amine's mother was banished into the next room.

"Think about it carefully," Amine's father shouted. "If you decide not to be gay anymore, you can stay. If not, then leave."

But Amine didn't have a choice. After all, he can't be anything but himself.

While French society has become more open and liberal, homosexuality remains a taboo topic in many Muslim families.

"It is exactly in this environment that homophobia is the most brutal for young people," says Nicolas Noguier from Le Refuge. "They expect support from their family, not rejection."

The consequences are serious. Many young people withdraw from their surroundings, have low self-esteem or even become suicidal. "The suicide rate among homosexual young people is 13 times higher than among heterosexuals of the same age," says Noguier.

Noguier himself experienced the catastrophic lack of support for young gays and lesbians the hard way. As a young person, he felt alone and misunderstood, always seeking people who thought the same way. He couldn't find special facilities and help. Today the French association SOS Homophobie offers an anonymous telephone counseling service for four hours every evening.

More than 1,200 people contacted the hotline in 2009, seeking advice and telling their stories in phone calls and emails about insults, threats and violence. Since 2003, the number of people seeking help has doubled, according to the organization's annual report in 2010. About one-tenth of all incidents happen within families, according to SOS Homophobie.

Rémi from Toulon told his parents when he was 16 that he was gay. Since then, they've been cold and distant. He tried to take his life twice.

Quentin, 20, lives near Marseille. "I'm so ashamed of you," his mom screamed in his face. "You disgust me."

Isabelle, 20, was beaten by her father. Sophie, 18, was locked up in a room and finally kicked out of the house by her mother.

At Le Refuge, someone is reachable by cell phone at any hour of the day or night. Up to 20 people call the organization every day, including parents who find themselves unable to deal with their child's sexual orientation. Education and prevention are important to the organization, and they try to prevent volatile situations from coming to a head.

The group's financial resources are modest. Although Le Refuge gets money from the state and local governments, private donations account for over 50 percent of the budget. At the end of 2010, the organization had a budget shortfall of €70,000 ($97,000) and its headquarters in Montpellier was under the threat of closure.

Since then, the situation has become better, but there are still hard choices to be made. Up to 400 young people seek help each year, but there is only space for 22.

In order to help the most people possible, Le Refuge also works to resolve conflicts. Sometimes it brings parents and children together at a nearby hotel. Together with educators and psychologists, the organization tries to bring about rapprochement within families.

But reconciliation is always difficult and attempts often fail because the hurt runs too deep. "Around half of the young people go back to their family," says Noguier.

Amine isn't one of them.