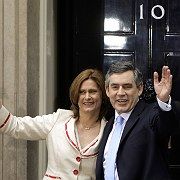 After 10 years in power, Tony Blair resigned as British prime minister on Wednesday. After his final prime minister's question time in the Commons, he went to Buckingham Palace to hand in his resignation to Queen Elizabeth. His successor Gordon Brown took over in the afternoon after he was asked by the queen to form a new government. He is her 11th prime minister -- the first was Winston Churchill in 1952.

But while Brown took over the top job in British politics, it was Blair who was once again stealing the spotlight. Reports that Blair was about to be appointed a special envoy by the Middle East Quartet have been making headlines around the world for the past week.

In the light of the widely anticipated job offer, Blair is expected to quit British politics altogether today after 24 years as a member of parliament. He is to travel to his Sedgefield constituency in northern England later Wednesday to make the announcement. One of his closest friends told the Guardian newspaper: "Tony is already psychologically out the door of No. 10 and on to new challenges."

Blair has already told the Irish Prime Minister Bertie Ahern about his new position, saying it will be "tricky." Speaking to Ireland's state broadcaster RTE, Ahern said: "He believes if you have hands-on, persistent engagement then you can have real progress."

US President George W. Bush is thought to have been instrumental in winning Blair the new role. In an interview with British mass-circulation newpaper The Sun, published Wednesday, Bush paid tribute to Blair, calling him "very talented." He said "I've heard he's been called Bush's poodle. He's bigger than that." Bush said that they were both "working together to achieve global peace in the face of enormous danger" and had "found each other in the same foxhole."

Bush also said that he had met with Brown when he visited Washington and that he "wasnt the image of the dour Scotsman at all."

Brown has been finance minister, or chancellor of the exchequer, ever since the Labour Party swept to victory in 1997, ending 18 years of rule by the Conservative Party. As such he is inextricably linked to Blair's government, including its unpopular decision to go to war in Iraq.

Brown and Blair were both elected to parliament in 1983 and shared an office for years. Their political futures were famously decided during a dinner in 1994 when Brown is alleged to have agreed not to oppose Blair as candidate for the Labour Party leadership following the death of John Smith. However, Brown was became increasingly frustrated after Blair reneged on the alleged deal to hand over power at some point.

But in the end, Brown achieved the prize he coveted for so long. He was elected leader of the Labour Party on Sunday and once he takes over as prime minister, he will be faced with the task of giving the party a new lease of life in the face of a resurgent Conservative Party under its new youthful leader David Cameron. The Labour Party is deeply unpopular due to the Iraq war, and is currently trailing the opposition by around 5 percent in opinion polls, according to a survey in Tuesday's Independent.

Brown has long been regarded as a prudent and dependable finance minister, with the country enjoying continuous growth under his stewardship. But his somewhat dour manner and reputation for intellectualism will be in stark contrast to Blair's charisma and ability to court the media. It remains to be seen if this change in style, and Brown's pledge to restore trust in government, will be enough to win over the British voters and secure Labour an historic fourth consecutive term in government. The next elections in Britain must be called by May, 2010 at the latest, although Brown has been pressured to call a vote earlier.