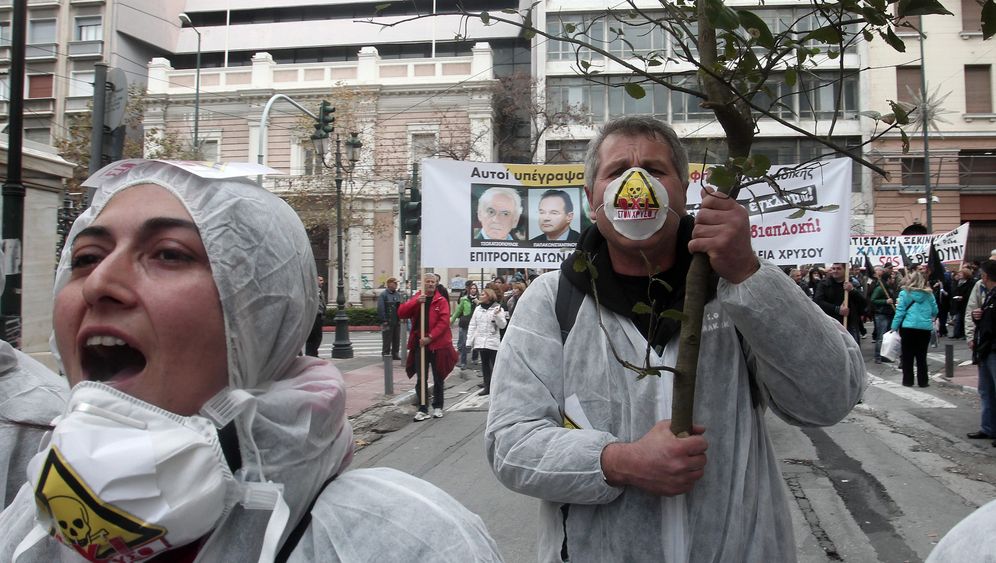 There is a question that Mary Karantza has had on her mind for some time, and she's asking it again on this August afternoon. But this time she's asking it out loud. The question is: What makes Greece different from the rest of Europe?

Why do the Greeks tick differently from the Germans? Why do they blithely live beyond their means for years, denying their government the taxes they owe, and tossing their garbage into large container without separating out recyclables even though they know that it's taken to illegal garbage dumps?

Karantza is sitting in her bright, loft-like office in the dstrict of Psiri near downtown Athens. A steel gate with an intercom system restricts access to the building. The junkies in the neighborhood recently started injecting a cocktail laced with battery acid, says Karantza. It makes them unpredictable.

The slim 33-year-old designer, wearing a black jersey dress, isn't asking these questions because she wants to list unfriendly clichés about the Greeks. On the contrary, says Karantza, she does so because it's time to get rid of these clichés. Her loft serves as a laboratory. Her experiment involves building Greek civil society. Karantza and others like her are the pioneers of a new movement.

For Karantza, the crisis represents an opportunity for change. She and Stephania Xydia, 26, founded a non-governmental organization called "Imagine the City." It is both a coordination office for citizens' initiatives and a reeducation program of sorts, with the aim of improving the management of cities and villages.

The Greeks, says Xydia, have never learned to participate in and shape public life. "The government treated us like underage children, and most people were happy about it." Xydia grew up in Luxembourg and attended university in England. She returned to Athens in 2011, after giving up her job as a management consultant in London. Her parents weren't happy about that. "What are you going to do in Athens?" they asked? Change things, she answered.

Now she and Karantza are keeping local governments throughout Greece on their toes. With the help of Imagine the City, Greeks can exchange information more easily, including reports and statistics. As a result, it's no longer as easy for mayors to build new town halls or village squares that no one needs -- except the local officials who award the construction contracts to their friends.

Things have started changing in Greece in recent months. People are doing more than just strike, rant and throw yoghurt in protest. Triggered by the crisis, a new, unprecedented community spirit is taking shape.

There is now a civil resistance movement with different goals than simply championing a particular group's interests.

In Thessaloniki, people aren't just fighting the planned privatization of the city waterworks, but have formed a collective and submitted their own purchase offer. The movement is called "136," because anyone who participates would have to pay €136 ($181) if the offer were accepted.

On the Chalkidiki Peninsula, Greeks are suddenly protesting against plans by a Canadian company and Greek construction tycoon to develop a gold mine. Protecting the environment has never been a particularly Greek virtue.

What is happening in the country, and what has come over the Greeks?

The State Was The Enemy

It isn't necessarily a question of mentalities, says Karantza. "If a Greek lives in Denmark, he eventually behaves like a Dane, paying taxes and recycling. A German living on the Peloponnese, on the other hand, stops paying his water bill -- because he only receives it sporadically and because no one asks about it."

The rules of the game in a given country determine the way people behave in a society, says Karantza. And for most Greeks, the state was primarily an enemy for a long time. The community was sabotaged wherever possible. It began with politicians unscrupulously lining their pockets and ended with taxi drivers, and some of the problems still exist today. And no one cared.

"Other nations have institutions. We have mirages," author Nikos Dimou wrote in 1975 in his famous collection of aphorisms "On The Misfortune Of Being Greek."

In the sixth year of the crisis, even the bogus institutions are in decline. The healthcare system has all but collapsed. The national health authority owes its creditors more than €2 billion. And the government itself owes the private economy about €7 billion.

No Money Left For Corruption

It was the old rules of the game that led Greece into the crisis. The political class may have set the rules, but almost everyone adhered to them. Now the game is over, and there is no money left for fakelaki and rousfeti, corruption and nepotism, two basic principles of Greek political life until now.

Suddenly there is room for those who want to set up new rules, and who want change and more cooperation. Some 3,000 initiatives were established throughout Greece in the last three years. They all have the same goal: to do things better than before. There are food cooperatives, community gardens, social pharmacies and neighborhood assistance programs for the poor.

"For decades, all that mattered to us was a BMW outside the door and a Miele washing machine in the bathroom," says Andreas Roumeliotis, a former journalist who has summed up the efforts of young Greek civil society in a new book called "I Can Do It Without the Euro." The title is not a reference to a return of the drachma, but to the notion that Greece is a rich nation, even without BMWs, because it is a fertile country.

Roumeliotis, 52, lost his job nine times in the last three years. He used to host a radio show on state broadcaster ERT, until Prime Minister Antonis Samaras closed the station from one day to the next. The journalist now lives in Crete and is setting up a social network. Starting in September, Roumeliotis hopes to combine all the new social movements in the country under a single web address, enallaktikos.gr. It will then be possible to search the new infrastructure of solidarity, from soup kitchens to second-hand clothing stores, on Google Maps.

"What we have to do now is actually the government's job," says Roumeliotis. But the government is finished, both financially and morally. This is not necessarily bad news. But the nation is undergoing a pretty brutal awakening.

In Crete alone, there are now five alternative currencies. For some, services are replacing the euro as a form of payment, but the real currency is trust. If a carpenter needs an attorney, for example, he'll make him a chair in return for his legal advice.

There are cafés in Athens where a guest pays for a stranger's cappuccino, along with his own, so that people who can't afford it can occasionally go to a café. In Thessaloniki, theatergoers can purchase tickets wth food.

If the new Greek solidarity had an icon, Giorgos Vichas would be a likely candidate. The 55-year-old cardiologist runs a clinic in a prefabricated building on the old Elleniki air base in the southern part of Athens. He works for free, as do 90 other doctors, and almost all fields of medicine are represented. Medical equipment, beds, chairs and drugs are all donated. Vichas and his colleagues do not accept money.

For almost two years now, they have served as a stand-in for the government, which can no longer guarantee basic medical care for its citizens, because they in turn can no longer afford their health insurance policies.

Up to 3,000 patients a month go through the waiting room, which looks like a makeshift bus stop, and the numbers continue to rise. At first glance, the clinic is a symbol of the hardship Greeks are going through. But it is also proof of a new communal spirit.

The Crisis is Bringing Out The Good in Greeks

In the past, he didn't know anyone who would join in a common project without being paid for it, says Giorgos Vichas. "I would never have believed that a society that was so superficial for so long could behave with such unity."

Until the crisis, says Vichas, the only things that mattered to people were their own families and their wellbeing. And now, although they are less affluent, the Greeks are more sympathetic and compassionate. The crisis is bringing out the good in the Greeks.

Mary Karantza und Stephania Xydia, the two women behind Imagine the City, used their network to install 200 lamps on an unlit street in downtown Athens last winter. People came from all over the city to help, each bringing a lampshade. The campaign attracted so much attention that Coca-Cola offered to be its sponsor. The mayor sent the two women a thank-you card.

The city has long tried to make its downtown area, mostly home to refugees and drug addicts today, livable again. Karantza and Xydia achieved more with the new lamps than the special forces units the interior minister deploys on a regular basis. New shops have opened on the street, there are tango parties once a week and students want to live there again.

It is primarily younger people who want change and are working hard to get it. Older Greeks never learned how to do this. They became accustomed to living in a system in which connections to influential people were more important than performance. For a long time, the most fervent wish many parents throughout Greece had for their children was that they land a job in the public sector.

While the crisis may not have changed the parents much, it has clearly changed their children. "Many are still searching for a savior in politics, someone who fill feed them," says Karantza.

She has often thought of leaving her country. Until recently, Karantza shared her office with two fashion designers. One is now living in Los Angeles and the other is in Berlin. "There are so many opportunities here to change something," she says. "We can't leave."

The two women are launching their new project in the fall. This time their focus is not on cities, but on the national government.

They are planning a constitution convention of sorts, which they call Politeia 2.0. They encourage anyone who wants something new for Greece to participate. Giorgos Vichas, the cardiologist, has already agreed to be part of it.

They really do want to change the rules of the game. 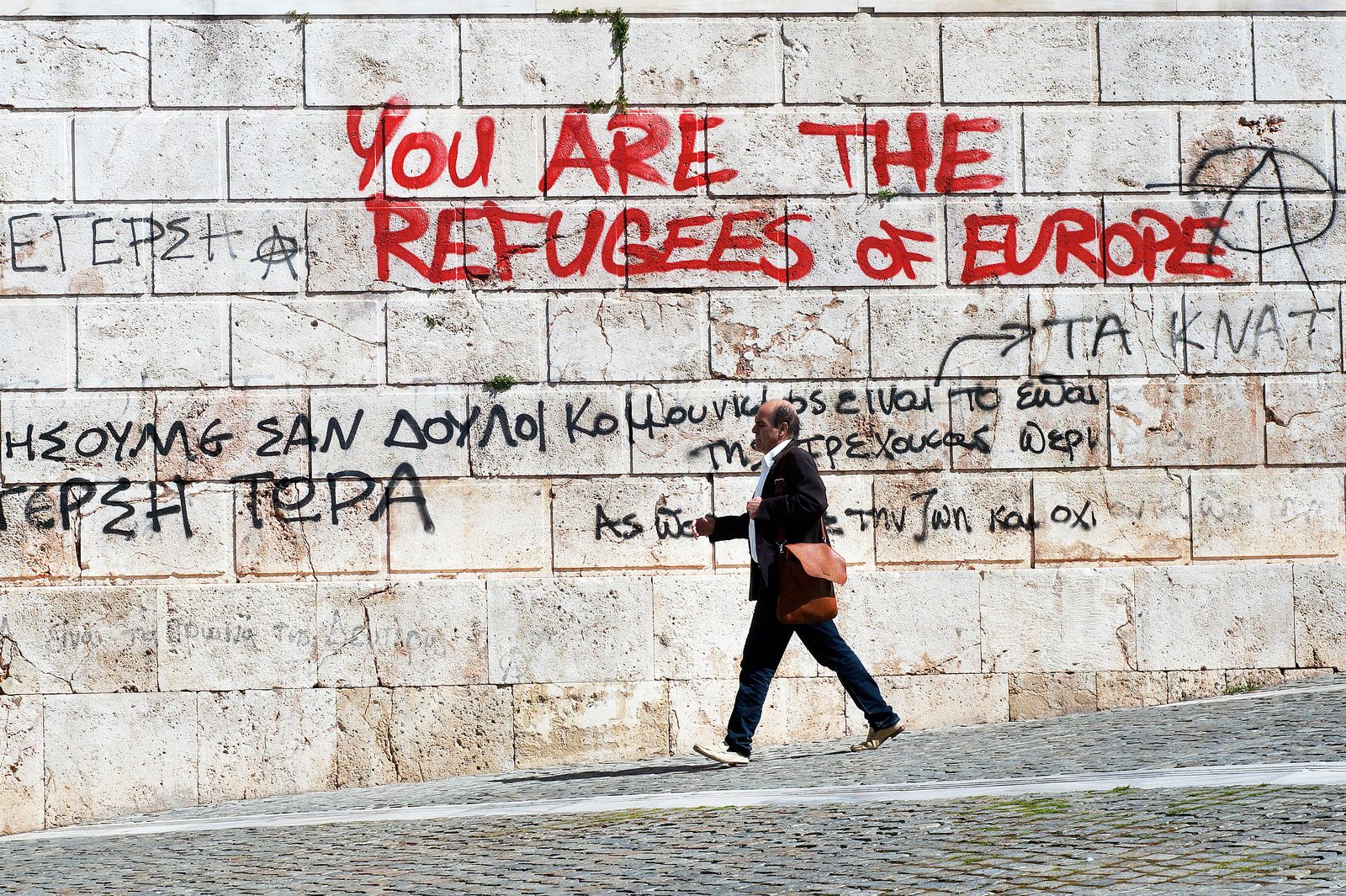 A street in Athens. Things are starting to change in Greece. People are doing more than just strike, rant and demonstrate. Triggered by the crisis, a new, unprecedented communal spirit is emerging.