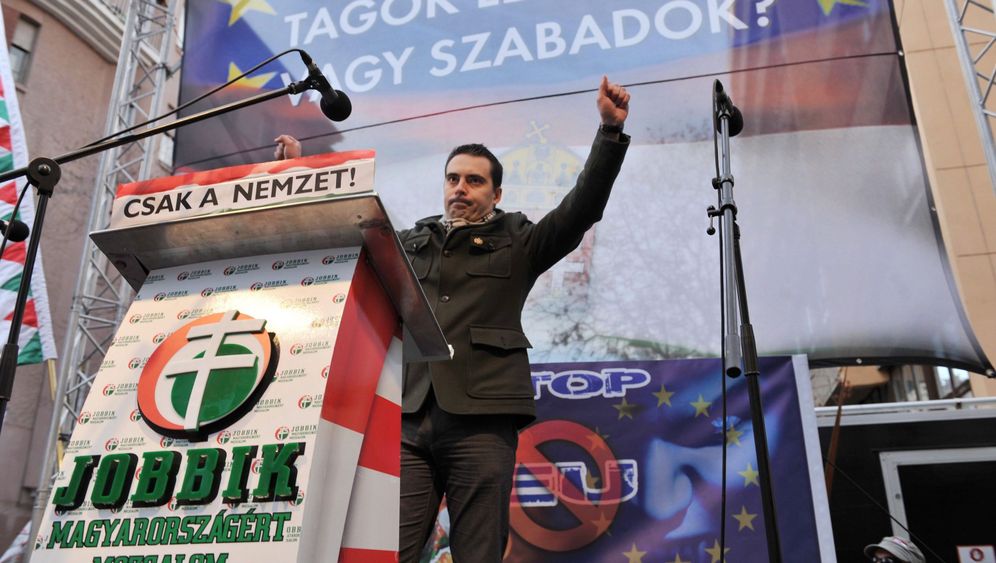 Photo Gallery: A Portrait of the Average Jobbik Supporter

The leader of Hungary's right-wing extremists rarely expresses himself so clearly. Speaking before a crowd of a few thousand supporters in Budapest's Sportmax complex on Saturday, Jan. 21, Gábor Vona announced the end of liberal democracy in the world. In the speech traditionally delivered before party members in January, the 33-year-old politician demanded "no compromising" either with or as part of the ruling political system, calling instead for "fighting, fighting and still more fighting." "We are not communists, fascists or National Socialists," Vona said. "But -- and this is important for everyone to understand very clearly -- we are also not democrats!"

Vona's words were met with highly enthusiastic applause. It was the first time that the head of the right-wing Jobbik party ("The Better") -- which received just under 17 percent of the vote during elections in April 2010 -- had made such a crystal-clear rejection of democracy. The speech was only given slender and primarily disinterested coverage in the Hungarian media. Elöd Novák, a deputy chairman of the party, claimed that this probably had more to do with organizational priorities rather than a conscious effort to boycott reporting on the event. "We are the second-strongest party in Hungary," he said, "but we hardly play any role in the traditional media."

Although Novák talks of "exclusion," he in no way intends it to be accusatory. Granted -- even though it backs Hungary's exit from the European Union, the party recently sent a letter of complaint to Neelie Kroes, the EU commissioner for digital agenda, alleging that it receives too little coverage from the Hungarian media. But the fact is that the party fondly fosters its image of being a media outcast. What's more, in reality, they have absolutely no need for the traditional media.

When Jobbik wants to communicate with its supporters and voters, it takes a different tack. Party politicians speak at so-called "resident forums" almost every day and listen to people in the smallest villages voice their concerns. Still, by far their most-used vehicle for disseminating their ideology is an extremely well-organized network made up of hundreds of right-wing extremist websites interlinked via platforms like Facebook or iWiW, a Hungarian social-networking service.

This was also the case with Vona's speech on Jan. 21. Barikad.hu, the website of Jobbik's weekly magazine bar!kád, broadcast the speech live. Likewise, right after the event wrapped up, other news portals operated by Hungarian right-wing extremists presented complete multimedia reports on the event, part of which eventually made its way onto Facebook.

This approach has long since become a matter of routine. For years, Hungary's right-wing extremists have very effectively utilized the Internet to reach their goals. They use it to disseminate their messages and to organize demonstrations and campaigns -- many of which also involve hate speech and incitement. "The Internet has been and remains very important to us," says Márton Gyöngyösi, a Jobbik member of parliament. He explains that this is "not only on account of our limited access to the traditional media, but also because a major part of our supporters and voters are young people who we can best reach via new media."

Experts have been observing this trend for some time now. "During the 2010 election campaign, the Internet played a key role for Jobbik," says Áron Buzogány, a German-Hungarian political scientist who studies social movements in Eastern Europe. "When compared with the other parties, Jobbik had the most up-to-date Internet presence based on Web 2.0 (tools). People visiting these (web)pages could take an active role in helping shape them, thereby becoming part of the campaign themselves."

Budapest-based political scientist József Jeskó, who has been studying the online activities of Hungary's right-wing extremists for years, reaches a similar conclusion. "Jobbik is the first party in the history of Hungary to have effectively used the Internet's advantages for its own purposes," he says. Jeskó emphasizes, however, that Jobbik neither built up nor controls the online network of Hungarian right-wing extremists itself. Instead, he says, "Small groups with similar convictions, but many different interests, have made contact with the help of the Internet and jointly created a virtual world for themselves."

Modern, well-networked right-wing extremism in Hungary was born in the fall of 2006. At the time, there was rioting in the streets of Budapest. Among other things, demonstrators stormed the building of MTV, the national broadcasting company, and crippled its transmission abilities. One of the things that sparked the riots was the secretly taped "speech of lies" delivered by socialist Prime Minister Ferenc Gyurcsány in May of that year. Although the speech was made during what was supposed to be a closed-door meeting of his party, it was secretly taped -- and broadcast. In it, he openly admitted to lying to voters.

One of the things that helped spark the violent protests was the appearance a few months earlier of the website kuruc.info, which has come to be the central and most-visited online platform of Hungary's far-right extremist scene. The website disseminates extremely aggressive anti-Semitic, anti-Gypsy, chauvinistic and homophobic content. What's more, under the rubric "collection point for genetic garbage," it periodically organizes what boils down to be witch hunts against certain individuals that can sometimes have horrific consequences. For example, in December 2007, the former socialist politician Csintalan Sándor was attacked and severely mistreated. For months during the run-up to the attack, the website had hosted a campaign against what it called the "Jewish rat." Those suspected of carrying out the attack, including Hungarian neo-Nazi leader György Budaházy, were arrested in 2009 and are currently standing trial on charges of committing terrorist crimes.

For years, law-enforcement officials in Hungary have also been trying to get the website, which is registered in the United States, shut down and to have the people suspected of running it arrested. But, so far, their efforts have failed. Rumor holds that one of its writers is none other than Jobbik deputy chairman Elöd Novák, though he naturally denies the accusation. "If I admitted that, I would obviously go to jail," Novák says. "But, it's true that I maintain good relations with the editorial staff," he admits before brazenly adding: "Sometimes I use my cell phone to send them material straight out of parliamentary meetings."

A World unto Itself

Oft-visited websites like kuruc.info also serve as hubs for the online network of Hungarian right-wing extremists. Visitors can follow links from these sites to other right-wing extremist websites, to the Jobbik party website, to local right-wing extremist organizations, to the web-based radio station szentkoronaradio.com and to "nationalist-feeling" folk or Rock groups -- all of which link back to each other. But that's not all. There are also ads for and links to "nationalist" stores and companies offering almost the whole range of everyday needs, including food, beverages, clothes, furniture, travel agencies, lawyers and financial advisers. Indeed, there are even websites for finding "nationalist-Christian partners" and ordering "nationalist taxis" online.

Political scientist József Jeskó describes this right-wing extremist network as an "almost completely self-contained virtual system" that gives its users an "unbelievably strong identity and a comprehensive worldview, their own complete way of living that only allows means or information to penetrate from outside with extreme difficulty." For Jobbik, Jeskó adds, this network offers a "huge amount of informal capital" through which it can "transmit an illustrated worldview to its voters free of charge" and shape their opinions. "Via the traditional media," he says, "the party would have not attained that to any degree."

Not the Party of 'Losers'

What makes the network even more valuable for Jobbik is the fact that its users are not people who are poor and socially frowned upon. Many political scientists initially viewed Jobbik as a party of "losers." But new studies provide a different picture, finding that the typical Jobbik voter is male, under 35, rarely unemployed and the holder of either a trade or secondary-school degree. Early last week, the British think tank Demos and the Budapest-based Political Capital Institute released a study based on the results of a survey of over 2,200 Facebook fans of the Jobbik party. The survey found that the typical respondent has "very low levels of trust in all major social and political institutions" and is "more likely to think that violence is justified if it leads to the right outcome." Likewise, the Internet-based service index.hu, Hungary's best-read online news website, summed up the average Jobbik voter as: "Very young, very Hungarian, very ill-tempered."

For political scientist Áron Buzogány, this shows that Jobbik's popularity is the tragic result of Hungary's failed political evolution. "For a long time, the country has been split into left and right to an extraordinarily deep degree, which is becoming an increasingly large social problem," he says. "An entire stratum of young people has grown up in the context of this division and has now found a home in the right-wing extremist micro-universe."