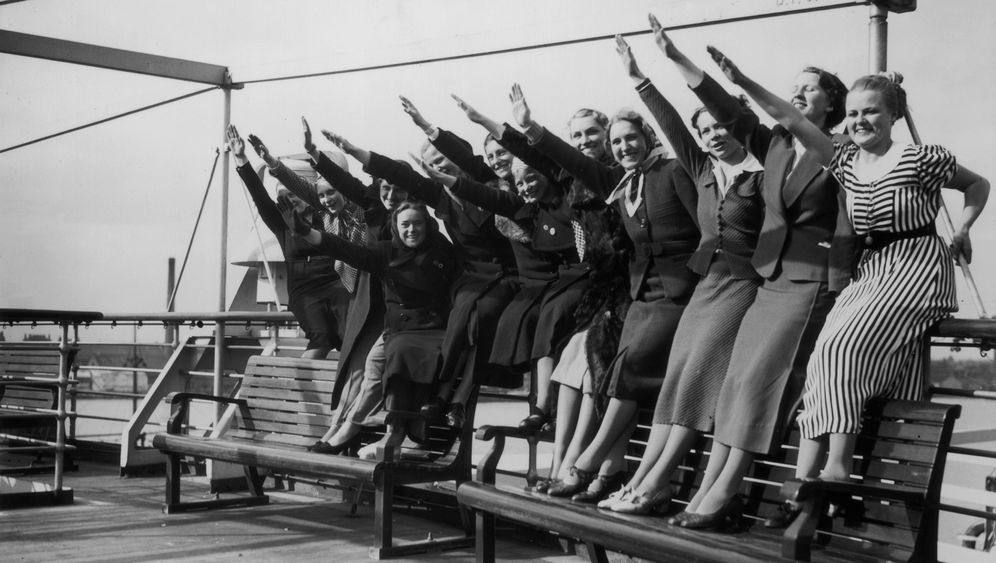 In February 1936, Daphne and Betsy, two girls from Oxford, discover the charms of Munich in Nazi Germany. Rachel Johnson, 47, tells the unique story of young British women in Hitler's Third Reich from the perspective of two fictional characters. The British press has praised the book for being both entertaining and historically accurate. Johnson, who is the sister of London Mayor Boris Johnson, only recently discovered that her own family had close ties to Nazi Germany.

SPIEGEL ONLINE: Ms. Johnson, how did you find out that some members of your family were in Bavaria in the 1930s?

Johnson: A couple of years ago, the BBC did a program on my brother Boris and our family history. We had always been told that my paternal grandmother was French, but it turned out she was German. Her last name was originally von Pfeffel, and we had descendants from Munich. My maternal grandmother went to Bavaria as a schoolgirl in the 1930s. Later, when I married, I discovered that my mother-in-law had been to Munich at roughly the same time.

Johnson: The strangest thing of all was that my mother-in-law was sent from England to Munich in April 1938, when Hitler was already preparing to invade Czechoslovakia and Poland. She watched as the Annexation of Austria took place. She even ran out to Hitler's car.

SPIEGEL ONLINE: How did you decide to address that past in a novel?

Johnson: I did a radio documentary about the English colony in Germany before the war, but didn't have enough for a non-fiction book. The English girls in Bavaria were fascinating nonetheless, so I decided to write a novel from their perspective. These girls were there just before the outbreak of war, and in some cases they were even close to the government, hanging out with Hitler and Hess. Sending your daughters to finishing school in Germany was the thing to do.

Johnson: Germany was probably our closest European partner at that time. And don't forget that George V. changed the name of his family from "Saxe-Coburg and Gotha" to "Windsor" only in 1917, during the First World War. There were still aristocratic connections and friendships to Germany between the wars. Two newspapers dealt with Anglo-German relations and printed articles about how wonderful Germany was, how amazing the scenery and how great Hitler was. The British liked that Germany was very clean.

SPIEGEL ONLINE: Where did the British girls in Germany typically go?

Johnson: Some moved to Berlin or Dresden, but Bavaria with its mountains, castles, museums and beer cellars was more attractive. Oberammergau was well known in England. My maternal grandmother was in Bavaria in the 1930s, she was Jewish. She enjoyed the opera in Munich, skiing in the mountains and later fell in love with a ski instructor from Freiburg, a member of the National Socialist party. His family called her "die Jüdin," the Jewess. Their relationship went disastrously wrong and she came back to England. I met a dozen English women while researching my book who were in Germany between 1935 and 1938, most of them over 90 by the time I interviewed them.

SPIEGEL ONLINE: What did they tell you?

Johnson: They said: "We had the best time of our lives." They felt fantastic being in Germany during the Third Reich. "It was the highlight of my life," one told me. To them, it was a rich experience, because England was very stuffy at that time -- lots of unemployment, terrible food and nasty weather. In Bavaria they had the crisp mountain air, a healthy life, the opera, the mountains and handsome Germans in uniform. They couldn't believe their luck! No chaperons, no parents. They had everything, including sex.

SPIEGEL ONLINE: What did they think about the Germans?

Johnson: They loved them! I asked the women: "Were you in love at that time?" And they said: "All the time, with everybody." They typically spent six months there, went to parties and were celebrated. Of course, they were not poor. The exchange rate was favorable for them.

SPIEGEL ONLINE: Were they aware of the dangers posed by the Nazis?

Johnson: They weren't aware of anything at all. They would see a sign at a swimming pool saying "No Jews," and they'd think: "What is a Jew?" They didn't know any Jews. Also, they were upper-middle class English girls, so almost by definition their fathers were probably quite anti-Semitic. It was an anti-Semitic time, not only in Germany. We had the rise of the far right, the brown shirts, and Oswald Mosley, leader of the British Union of Fascists. My mother-in-law's family was typical of aristocratic attitudes of this period. They were very pro-German. My mother-in-law's father was chairman of the Anglo-German Alliance, which was set up to bring the two countries closer together. He would make speeches in the House of Lords saying Hitler is a sound chap.

SPIEGEL ONLINE: What did the women say about Hitler in the interviews with you?

Johnson: They're not saying anything good about him, but they won't change their opinion of what they felt before the war. To them, it was the perfect time. Maybe they saw the SS marching on the street, but basically they enjoyed themselves. "Hitler was marvellous, the problem was, he went a little bit too far," one of the women told me. Others said they couldn't believe that these wonderful people they spent such a happy time with could be capable of things like these. You have to remember England in the 1930s suffered from a widespread depression. And then these girls go to Germany, and on the surface everything looks good. They didn't know what the regime was doing, they didn't know about the Nuremburg laws. One of them told me about her music professor, who suddenly disappeared. He was Jewish and had to flee. Nobody became suspicious. It was wilful blindness.

SPIEGEL ONLINE: When did this change?

Johnson: The English turned against Germany in September 1939, after the invasion of Poland. Most Britons had to leave Germany that summer. The only one left in Munich was Unity Mitford, a prominent British Nazi, big Hitler fan and part of his inner circle. In some way, Unity was an extreme example of the English fascination and admiration for Hitler. Her parents went to Germany and tried to get her to return to England, but she refused. They had to leave without her.

SPIEGEL ONLINE: Despite its subject, "Winter Games" is not an unhappy or even tragic novel. What has the response been like?

Johnson: It's been a quite difficult book to promote. People still think it's a dangerous topic. I talked about it during the Jewish Book week in London. The audience was almost entirely Jewish. The first question was: "What was the appeal of the Nazis for you, Rachel?"

SPIEGEL ONLINE: You went to Berchtesgaden, where many of the top Nazis had vacation homes, on a research trip. What was your impression?

Johnson: I found it really dark. By accident, I went there on Hitler's birthday. People lit candles on the site of the Berghof, his former residence. That was quite weird. The mountains and the scenery around the Königsee lake are beautiful, but it's very hard to avoid the history -- or, as the tourism people call it, "the challenging past."

SPIEGEL ONLINE: Why are the British still so obsessed with Nazis, Hitler and World War II?

Johnson: It's bizarre, isn't it? I think there are more English books published on Nazism than on any other subject. It remains a period of great fascination, a time of great danger, but also of great English bravery. I thought it was important to try to tell this part of our past from the perspective of some young and slightly naive women.