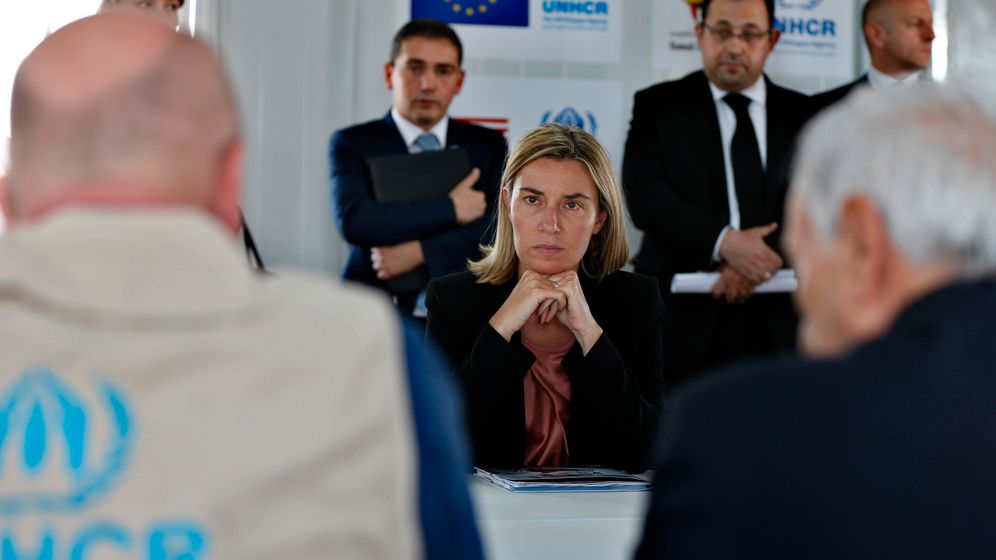 "Let's go to the bar," the foreign minister suggests. It is shortly after 10 p.m. and Federica Mogherini, with her long blond hair and a discreet pearl necklace, strides purposefully ahead, choosing a table at the front-left. A waiter rushes over.

What would she like? "Nothing," the minister says pleasantly. Apologetically, she explains she prefers being "sober."

A married mother of two, Mogherini has been at the pinnacle of Italian diplomacy since February. Last week, her name was even thrown into the mix as a possible successor to EU foreign policy chief Catherine Ashton.

At 41, Mogherini is two years older than Prime Minister Matteo Renzi, but of all her predecessors in the Foreign Ministry in Rome, only Mussolini's son-in-law Count Galeazzo Ciano was younger at the beginning of his term.

On this evening in Vienna, however, following a meeting of EU foreign ministers, she denies that her relative youth could be construed as a potential shortcoming. "You can't demand generational change on the one hand and expect 40 years of experience on the other," she says.

Young, feminine and focused on issues: Mogherini embodies much of what the restless reformer Renzi values as he tries to awaken Italian politics from its torpor. In the European Parliament elections in May, voters thanked Renzi by handing him a 40.8 percent result, apparently the reward for a government that is focused on change. Among Social Democrats in the EU Parliament, the Italians now represent the largest faction.

The generational gulf between the former bunga bunga premier Berlusconi and Renzi is striking. But so too is the contrast between Foreign Minister Mogherini and those who came before her, particularly her divergence with Emma Bonino, the 65-year-old who held the office until February. The human rights activist and chain-smoking ex-European commissioner was considered to be indispensable because of her experience -- at least in the eyes of Italian President Giorgio Napolitano.

But Renzi didn't agree, as Bonino was informed shortly before the new government's swearing in. It was a bold move, but it served as further proof that the new premier was serious about following the path he had laid out for himself.

Since February, Mogherini has been doing what she can to prove that Renzi didn't risk too much by choosing her over Bonino and to counter accusations that she lacks sufficient experience. "Green? For a woman of my age, that's a compliment," she says. No matter how much attention Renzi calls to the fact that his cabinet is 50 percent female, Mogherini does not see herself as a token woman.

The minister, who among other things first decided to clear her office of dark works of art left over from the Bonino era, is an optimist -- a characteristic which will serve her well with Italy having taken over the rotating EU presidency on July 1. Rome's voice is more important than ever in several crucial issues currently facing the EU: the Europe-wide support received by EU-critical parties; the ongoing refugee tragedy in the Mediterranean; and bloodshed in the Middle East.

That Renzi's Italy, together with other countries governed by the center-left, wants to have a greater voice internationally is clear. At a recent lunch on the Lido, just off Venice, where the Council for the United States and Italy was meeting, Mogherini said that Rome would like to take on a greater role as a mediator between "Russia and Ukraine, between Saudi Arabia and Iran." It is a plan that leads Richard Burt, the former senior US diplomat dining next to Mogherini, to smile derisively. The Iranians, Burt says, want neither Italian nor Chinese mediators. "They only want to talk with Washington."

Italy's new foreign minister has for years maintained contacts with US Democrats. In 2008, she could still be seen in Rome wearing an Obama T-shirt. Not everyone in Italy is enthusiastic about the fact that she has now risen to a position where she can preach Obama's message of peaceful discourse in a violent world. In a Corriere della Sera editorial, Mogherini was recently accused of wide-eyed "Obamaism" and "weak diplomacy."

But Mogherini is nothing if not steadfast. In Washington recently, she emphasized "how strong …, how good, how excellent" ties with the US are. The Obama camp was likewise pleased to hear the Italian minister say: "We take the same line as the United States: the austerity policies need to be accompanied by greater flexibility to stimulate growth." Talking in smaller groups, she even mentions an "American" stamped cultural mission undertaken by the Renzi government.

One cannot accuse Mogherini of a lack of vigor. Immediately after taking office, she tweeted: "Spoke in these hours with Ashton, @JohnKerry, Lavrov, @LaurentFabius and @EVenizelos about #Ukraine, #Libya, #Syria, #Afghanistan." However, the photo she once posted to her blog showing her together with the erstwhile Palestinian leader Yasser Arafat has long since disappeared. As has the reprimand of Matteo Renzi -- who was mayor of Florence at the time -- that she tweeted in 2012 saying that he "still has a lot to learn when it comes to foreign policy."

The daughter of a director and born in Rome, Mogherini single-mindedly pursued political success. She studied political science and early on became involved in the leftist political youth organization Sinistra Giovanile. She was likewise active in the fights against Apartheid, gender discrimination and nuclear weapons. She was always "hard-working, well-read and excellently networked," say long-time acquaintances. People who have worked with her say she is highly regarded among Social Democrats, regardless who she served under. Among her posts were positions under former communists like Massimo d'Alema, Walter (Walterloo) Veltroni and even one-time Christian Democrats. The party always knew it could rely on her.

Despite her success, the minister remains grounded. She likes to go for walks in Prati -- the Roman district not far from the Vatican where she lives -- and be recognized by "pretty much nobody." When traveling on government business, she flies economy class. Like everybody else on the return flight from Vienna to Rome, flight attendants served her a cheese sandwich wrapped in cellophane -- which she ate while marking up a file on the Ukraine crisis.

Italy, with an official sovereign debt of €2.1 trillion, has to cut costs. "That's no problem for me," Mogherini says. "I am trying to change my life as little as possible anyway." But in her ministry, situated in the Palazzo della Farnesina, many are concerned about the coming cost-cutting measures. The ostentatious building, with its more than six kilometers of hallways and close to 1,300 rooms, is a remnant of the Mussolini era, back when Italy was still a colonial power. Italian ambassadors still earn more than twice the salary of their German counterparts.

In total, however, Mogherini's budget is just a fraction of that enjoyed by Germany's Foreign Ministry. And she has been tasked with cutting it by a further €108 million -- a significant burden given the crisis Italy is already going through, says one Western diplomat in Rome. "The decline of Italian foreign policy has been underway for 20 years and you can still feel the effects of the Berlusconi years. Plus, there has been an increasing tendency toward navel-gazing and insular thinking."

The fact that Renzi included a "rather inexperienced" foreign minister in his already "very inexperienced and very small team" is a significant risk for a country in crisis, says another diplomat. "Where are the Italians?" has been a common question asked in the past at important summits, where the Germans, French and British have become accustomed to taking the lead.

Mogherini is demanding "constructive cooperation" among EU member states and an end to the tendency to represent positions domestically that are contrary to those agreed to at the EU level. "What you say in Rome or in Berlin, you have to implement in Brussels," she says. She also has a clear answer to the kind of anti-German polemic spouted by opposition leaders Beppe Grillo and Silvio Berlusconi: "We have to communicate the message that, outside of football, there is no such thing as Italy versus Germany."

Indeed, Mogherini, who loathes missteps, once even vaunted the "Rome-Berlin Axis," only to quickly correct herself; the term refers to the unspeakable, World War II-era alliance between Hitler and Mussolini. In Berlin, the foreign minister's course has been benevolently interpreted as a "natural reflex to align with Frank-Walter," a reference to Germany's Social Democratic foreign minister, Frank-Walter Steinmeier. Indeed, Steinmeier expressed his appreciation for the "superb cooperation" on May 8 in Rome on the anniversary of World War II's end.

The Italian foreign minister, who frequently and proudly speaks of her "political home," feels a closeness with fellow Social Democrat Steinmeier. Together with him, she feels equipped to confront concerns that the upcoming transition phase in Brussels -- with new faces in Parliament and the Commission -- could lead to chaos, just as Italy holds the EU presidency.

After all, political chaos is something Italians know well. On average, one government a year has failed in Rome since World War II. What happens then if the second half of 2014 sees Rome sink into the kind of domestic trench warfare it has seen so often? What happens if Renzi's government stumbles over its own reform plans?

That won't happen, Mogherini says in the Viennese bar, flashing her warmest smile. The Renzi government has the people behind it, she adds. "Because many Italians suspect that this is our last chance for change."