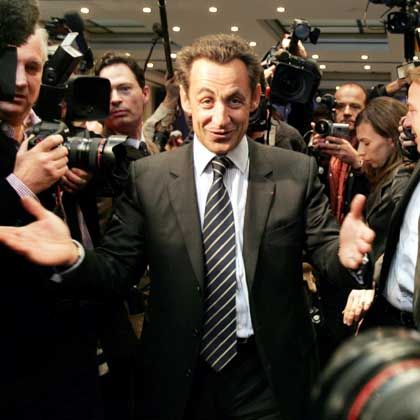 France's conservatives are pinning their hopes on Interior Minister Nicolas Sarkozy to win the presidential elections in April. But Chirac is not lending him his support.

The political base may be unified, but the higher echelons are engaging in intense crossfire. On Sunday, Nicolas Sarkozy, the French Interior Minister and leader of the conservative governing party UMP, will be officially elected as the party's candidate for April's presidential elections. His election is already considered so certain that the press are already speaking of his imminent "coronation."

Sarkozy is considered the only right-wing politician capable of measuring up to the charismatic Socialist candidate Ségolène Royal. But for Sarkozy, the son of Hungarian immigrants, the most threatening opponents come from within his own ranks. In the days leading up to the party congress, President Jacques Chirac and Prime Minister Dominique de Villepin have made a series of small -- and not so small -- jabs at the interior minister in the media.

The quarrels and bickers amount to playing with fire. If the right-wing camp were to be divided, many voters would drift towards the far-right National Front and its 78-year-old leader Jean-Marie Le Pen, according to some politicians. No one in France has forgotten that Le Pen got through to the second round of the 2002 presidential elections -- although that partial victory was to the detriment of the socialist candidate.

Considering the remarkably positive poll results Le Pen is getting (around 12 percent) and the continuing popularity of Royal, the stance taken by Chirac appears almost surreal. Seventy-four years old and with little to show for his 12 years in office, he told the press at a New Year's meeting on Thursday morning that he would decide whether he would run for a third presidential term during the first quarter of the year. "When the time comes, I will make my decision known to the French, whereby only one criterion is important: the national interest," Chirac said in Elysée Palace.

That statement is hard to beat for chutzpah: Eighty percent of the French don't want to see Chirac ruling their country for another term, and the governing party UMP, founded by him, has long become a fan club for the 51-year-old Sarkozy. But hardly anyone believes Chirac is seriously considering running for president again. His stalling tactic is probably intended to signal that he doesn't think the dynamic, strong-willed Sarkozy is the best candidate to lead the French right to victory against the socialists, who have achieved a new glamor under Royal.

Chirac is being seconded in his role as official skeptic by Prime Minister Dominique de Villepin, who likes to wax eloquent about the greatness of France or illustrate his political visions with poetry. Villepin said earlier this week that his party needed to be drawn up like a "Napoleonic army" in preparation for the coming elections. The truth is that Villepin, who would himself have liked to become the UMP's presidential candidate, is displaying considerable pettiness. Instead of closing ranks behind Sarkozy in order to campaign against the Socialists, he is thinking aloud about whether he even wants to take part in the party congress. He's already announced he wants to abstain during the vote for the presidential candidate.

Villepin's bitterness comes as no surprise. The government leader was given his position by Chirac in the summer of 2005, with an eye to him becoming Chirac's successor. But Chirac's confidant, who has never faced a democratic election, quickly made enemies within his own camp through his arrogant manner. His political fate was sealed with his attempt to reform employment legislation in April 2006. The entire population was so outraged at the proposal, mainly because of Villepin's refusal to discuss it, that the proposed law was eventually scrapped by Chirac -- a decision that pulled the political rug out from under Villepin's feet.

Villepin now has to pay a high price for being a bad loser. During a meeting of the UMP's parliamentary faction Tuesday, he was greeted with loud booing and even obscene gestures. The daily newspaper Le Parisien said it was "almost a wonder" that no-one physically attacked him. The members of parliament set on Villepin so vehemently that Sarkozy himself issued a conciliatory statement the next day. "I will need Dominique de Villepin too," the minister said with reference to the man who organized Jacques Chirac's two successful electoral campaigns, in 1995 and 2002. Sarkozy knows he now has to play the reconciliation card within his own political camp.

Even Defense Minister Michèle Alliot-Marie agrees with Sarkozy on that point. The popular politician was considered the last secret trump card the Chirac camp had up its sleeve. Up until now, she had kept open the option of standing as a candidate. But MAM, as she is called by colleagues, will throw in the towel on French TV on Friday evening -- for the sake of the unity of the right-wing political camp.

According to sources close to the minister, Alliot-Marie is afraid that if she stood as a candidate it could catapult Le Pen into the second round of elections. The threat is clearly perceived as real by UMP politicians. Apart from a hard-core around Chirac and Villepin, even sworn members of the Chirac clan have lined up behind Sarkozy during the last few days, with former prime minister Alain Juppé taking the lead. Juppé himself was once treated as a possible crown prince, but was then sacrificed by Chirac during a corruption affair.

Another former prime minister, Jean-Pierre Raffarin, who was once a loyal follower of Chirac and the only prime minister under him who pushed through an unpopular measure -- his 2003 reform of the pension system -- to the end, not only came out in support of Sarkozy but even explicitly called on Villepin to stop his little games. "We can not be pleased about arguments, polemics and disparaging comments," he said in an interview with French daily Le Monde on Friday. "Diversity can provide a foundation, but there are limits -- they lie where that diversity serves the interests of our opponent."

After the quarrels with the Chirac clan and his election on Sunday, Sarkozy's struggle against this opponent, the socialist candidate Royal, will likely turn out to be an entirely new kind of challenge for him. The 53-year-old Royal might choose to shun a direct confrontation, to avoid damaging her shining image and her popularity with the French. The interior minister, on the other hand, loves strong words and polemical discussions. Villepin is among those who already suspect the difference in approaches could lead to Sarkozy's downfall in the electoral campaign. "No one can expect Royal to open the debate," Villepin told the conservative daily Figaro.

He's not altogether wrong on that point, it seems. The Socialists published a pamphlet in Paris this week listing what they claimed were Sarkozy's past contradictions, about-faces and false promises. Madame Royal, meanwhile, kept as much distance as possible. She was traveling back to France from China at the time.