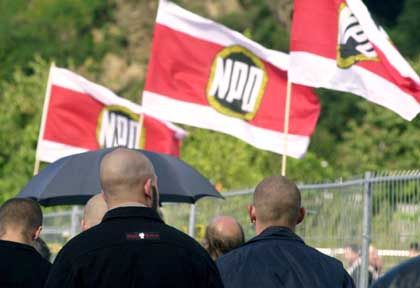 The scene: Germany. Almost 5 million people are unemployed. The economy is stagnant. A dissatisfied population protests against a bumbling government while collective self esteem tumbles.

Camera moves over to the xenophobic and anti-Semitic leader of a far right party who lauds Adolf Hitler as a "great statesman."

The party leader is Udo Voigt, head of the extreme right-wing National Democratic Party, and one of the big winners in September parliamentary elections in the state of Saxony. Luckily, big in this case is relative -- while the NPD did make dramatic gains and is now in a state parliament for the first time, they still only have 12 out of 124 seats and a mere 5,300 supporters. And Voigt, who speaks in an ice-cold monotone, is no Hitler, nor is Germany -- with 60 years of democracy and World War II behind it -- the radical political playfield it was in the late 1920s. Making comparisons with the Nazi past is always dicey here. Yet, somehow, especially when the far right is concerned, it is also unavoidable.

"We carry our past with us," Wolfgang Wippermann, a political scientist at Berlin's Free University and an expert in far right parties, told SPIEGEL ONLINE. "There is a tendency to dismiss victories when they are small. But remember, in 1928, the National Socialists had 2.6 percent of the vote." By 1933 they were in power.

The NPD is not the only extreme party gaining in Germany. The anti-foreigner, anti-immigrant Democratic People's Union also won a parliamentary victory in the state of Brandenburg, outside of Berlin, winning six of 88 seats. Now, the two parties say they are planning to team up for the 2006 federal elections. If they manage to team up -- that is, keep their party-leaders' notorious dislike for each other in check -- they could have a chance to gain representation in the Bundestag, Germany's parliament. It would be the first time since World War II that far right parties held federal office.

One of the biggest fears is that they could capitalize on high unemployment rates, a stagnant economy and general discontent to gain votes. "It's terrible to think about, but they have a chance to get up to 20 percent of the vote," Wippermann said, citing research statistics that show 20 percent of Germans latently support right wing platforms. "There is tremendous potential for this in our population." Indeed, a Forsa Institute poll shows that 60 years after World War II, one in five Germans remains latently anti-Semitic. The statistics also show 40 percent of Germans to be anti-foreigner (particularly anti-Turkish) and 64-68 percent to be anti Gypsy. While such attitudes don't necessarily translate into right-wing votes, they are disturbing -- and potentially election-altering.

"Thank God they (right wing parties) don't have a Fuehrer," Wipperman said, evoking the infamous title used by Hitler and pointing out that the biggest weakness of the far right has been a lack of strong leadership and solid ideas. "If they find a charismatic leader it could really be dangerous."

Don't ring the alarm bells yet 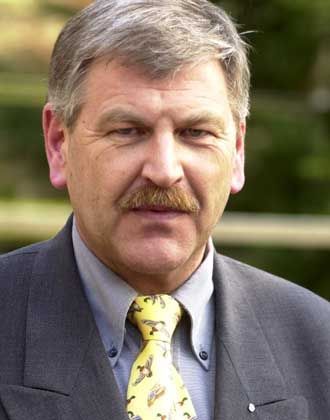 Peter Loesche, a renowned political scientist at the University of Goettingen, says there is indeed reason for concern, but not such alarm. At least not yet. The numbers tell it all. The DVU has a scant 400 party members. That makes a grand total of 5,700 registered members in the two parties. That could, of course, increase. In the weeks after the September election, the NPD gained 260 recruits and the DVU gained 70. Voigt now says he hopes to soon add 1,500 more. For a country with 82 million, it's still small potatoes.

One tricky thing about parliamentary representation in Germany is that, once parties get over 5 percent support, they get federal funding according to how many votes they win. So, when the far-right party makes gains, the German public ends up paying to support their party. Many Germans find such a scenerio anathema.

If the parties do manage to merge, Loesche thinks they would likely reach the 5 percent mark and could even get as much as 7 percent. Although this would be shocking for Germany's soul and would make headlines across the world, it likely wouldn't have a tremendous political impact. After all, having power and using it are different matters. Not only would the far right be an absolute minority party, but -- as is already the case in state parliaments -- they would likely be ostracized by members of mainstream parties. "They would be isolated in the Bundestag," he said. "No one would talk to them. They would be helpless."

Is there a chance that a united far-right party could organize and gain more popular votes as the Nazis once did? Until now, the answer has been no. Leadership, disorganization and a lack of ideas have caused them to implode and fizzle every time they have made gains. There are signs it is already happening. Instead of choosing neutral party leaders for a fantasy joint ticket, Voigt has hinted he will select prominent Neo Nazis with extreme views. "If they do that they will be shooting themselves," Loesche said. And, they are openly -- rather than tacitly -- courting Neo-nazi party members.

Far-right leaders have also have failed to put forth a clear political agenda let alone suggest a way to solve the country's biggest problem: unemployment. Ironically, the unemployed make up the core of voters who support the right wing. So do disillusioned youths from the former eastern states, many of whom are outraged at the government's plans to cut jobless benefits in order to spur the economy.

"You have to remember one thing," Wipperman said. "Hitler didn't have an economic plan in the beginning. He just used simple slogans....I am not trying to be alarmist, but when the far right gains anywhere, it is always alarmist." It is especially so in Germany.