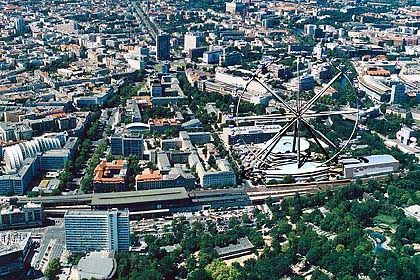 Wheel of fortune: A photo montage of planned ferris wheel for West Berlin.

West Berlin has seen better days. The glittering showcase of capitalism on the Cold War's front line has been in decline ever since its main tourist attraction, the Wall, was breached in November 1989. Today, Berlin still consists of two cities, but the tables have turned. The rejuvenated east has the tourists and the nightlife. The flaking west is pondering its past.

Discount stores, boarded up shops and "For Rent" signs blot the West's proudest boulevard, the elegant Kurfürstendamm. The "Kudamm's" two traditional comedy theaters are threatened with closure and the street has already lost its two most famous cafes.

Elsewhere in the West, the decline is even more visible, with closed stores, crumbling facades and uneven pavements making an oddly communist impression.

The area's opera house, the Deutsche Oper, a concrete block far off the beaten tourist track, may face the axe following cuts in city funding because it isn't doing as well as its two east Berlin rivals. The Berlin Film Festival has long since moved east to Potsdamer Platz, an area of modern office blocks, malls and cinemas built on what used to be no man's land during the Cold War.

In another symbol of the eastward migration, the bust of Egyptian queen Nefertiti has been moved from its home in a western museum to the Museum Island complex along the Spree River, which is undergoing a massive refurbishment.

The district of Charlottenburg, in the heart of the West, still boasts many of Berlin's most elegant properties. Behind stuccoed facades, its well-appointed brothels still cater to their ageing clientele. But the nightlife these days is sedate at best, compared with the vibrant, trendy east where most of the tourists and young people head.

For years, the people of West Berlin were resigned to their area's decline. After all, it was inevitable the east would have to be rebuilt. But in May came a decision that symbolized and worsened their plight.

The railway demoted what had been Berlin's most important mainline station, Bahnhof Zoo close to the Kurfürstendamm, by disconnecting it from its long-distance train routes. The sleek high-speed ICE express trains now stop at the new central train station close to the Brandenburg Gate, opened with great fanfare at the end of May. It's the biggest blow yet to the West. Businesses in and around Zoo station have reported a 70 percent plunge in sales since May and hotels and restaurants on the Kudamm are suffering too. 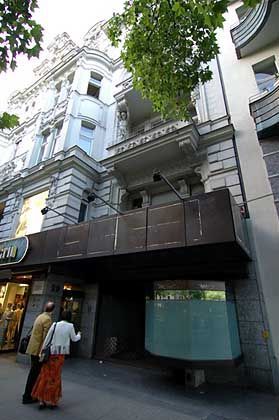 Shut down: a boarded-up store on elegant Kurfürstendamm.

"Business collapsed overnight," said Horst Flatau, who owns a fruit juice stall in Zoo station and has had to lay off three employees in the last month. His sales are down 60-70 percent because passenger numbers slumped as soon as the long-distance trains ceased stopping there.

Klaus-Dieter Gröhler, deputy mayor of the Charlottenburg-Wilmersdorf district, said: "This is another blow to the western part of the city. We've got to be careful that rebuilding the east doesn't entail tearing down the west."

Helga Frisch, 72, a former clergywoman, has been mobilizing protesters and has collected 127,000 signatures with her petition to have trains stop at Bahnhof Zoo again. "I'm a stubborn woman and don't give up easily. If the heart of West Berlin is turned into a wasteland it will lead to a decline of the whole west of the city," she said last week during a demonstration by some 200 people outside Zoo station.

Among the protestors was Holger Bau, an engineer who has lived in West Berlin for over 40 years. "The Kudamm has been going downhill for 15 years. It used to buzz in the 1970s. These days nothing's happening here and everything's moving east.

"This used to be our station. The new one doesn't even have a proper red light district next to it." Almost as bad, the new station isn't connected to the subway system yet.

Still, it's unlikely the railway will relent. Having its ICE trains make another halt in Berlin would add minutes to journey times it has been battling to shorten in order to compete with budget airlines.

But help may be at hand in the form of a ferris wheel, 40 meters taller than the London Eye, which a private investor group plans to build next to Zoo station.

It remains uncertain whether the project will go ahead, but if it does, it could provide an urgently needed boost to the area, said Peter-Michael Riedel, who heads a lobby group of Kurfürstendamm retailers. "We want to revive this part of the city. Something has to be done about the Kudamm and the whole west of the city needs to be regenerated."

Scheduled for completion in late 2008, the 175-meter wheel, the tallest in Europe and one of the biggest in the world, could bring in an additional 500,000 visitors to the area per year and boost local business revenues by €60 million, a recent survey commissioned by the city showed.

The wheel would have 40 enclosed cabins -- with each seating up to 28 people -- and would offer unrivalled views of the city, ironically including many of the shiny new landmarks on the eastern horizon. The wheel could attract many of the 15 million tourists who visit Berlin each year.

Berlin's finance department, keen to sanction a project that would help local business, is ready to sell the required property but the investor group, World Wheel Berlin Holding, hasn't signed the contract yet and a rival project has emerged to build a wheel in the east.

No decision is expected until after Berlin regional elections on September 17. That could be too late for fruit seller Flatau. "If things don't pick up soon I'm going to have to shut down," he said.