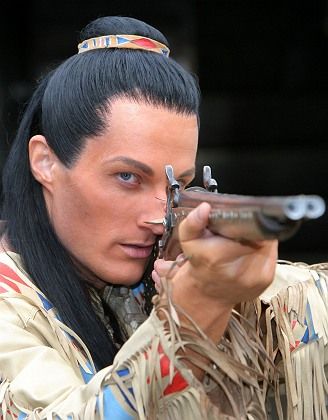 A German actor dressed as Winnetou at the Karl May Museum in Radebeul. 'To Germans Winnetou is like Paul Bunyan, Abe Lincoln and Elvis rolled into one.'

The other day I found Jürgen Michaelis, a short, 50-year-old, beefy-handed man with a broad smile, standing by himself inside a teepee not much bigger than a phone booth behind a house in this suburb of Dresden. A former locksmith and demolition worker from Chemnitz (which used to be called Karl-Marx-Stadt), Mr. Michaelis settled here a couple of years ago.

Gazing through inch-thick lenses and overjoyed to have a visitor, he showed off his homemade deerskin suit. Perched halfway on his head, about to tumble, was a matted black wig with a blue feather. At his feet burned a tiny charcoal fire, large enough to warm a single metal mug of water on a cold morning. A few forlorn trinkets rested on wood blocks, ostensibly for sale.

My Indian name, Mr. Michaelis told me, is Lonely Man.

A few months ago the director of the Panhandle-Plains Historical Museum in Canyon, Tex., told me in passing how his museum was frequently overrun by visiting Germans, so the curious German obsession with the Wild West  which newly arrived Americans repeatedly discover to predictable eye-rolling from Germans, for whom its hardly news  was not exactly unknown to me. Still, the extent of it is a little astonishing.

At powwows  there are dozens every year  thousands of Germans with an American Indian fetish drink firewater, wear turquoise jewelry and run around Baden-Württemberg or Schleswig-Holstein dressed as Comanches and Apaches. There are clubs, magazines, trading cards, school curriculums, stupendously popular German-made Wild West films and outdoor theaters, including one high in the sandstone cliffs above the tiny medieval fortress town of Rathen, in Saxony, where cowboys fight Indians on horseback. A fake Wild West village, Eldorado, recently shot up on the outskirts of Templin, the city where Angela Merkel, the chancellor, grew up.

The cause of this infatuation is a writer named Karl May (1842-1912), virtually unknown in the United States but the most popular author in German history.

A con man and Walter Mitty-like homebody who spent eight years in jail dreaming of Wild West adventures, May (the name is pronounced My) wrote dozens of tall-tale books that have sold more than 100 million copies, maybe twice that many if you count translations from the German. Kaiser Wilhelm II, like May a fantasist who loved to dress up in exotic costumes, adored Mays books. So did Einstein and Albert Schweitzer, Kafka and Fritz Lang. Hitler did too.

Mays hero was Winnetou, a fictional Apache chief, a household name here. To Germans Winnetou is like Paul Bunyan, Abe Lincoln and Elvis rolled into one. During the World Cup last year, an occasion for the Germans to debate, as they often do, the pitfalls of reviving their nationalist spirit, Der Spiegel, the leading newsmagazine, published an article titled The Land of Winnetou.

There are the German poets and thinkers, the German forest, the German comfortableness, German efficiency, the German longing for Italy, and there is Winnetou, it pronounced. Winnetou is the quintessential German national hero, a paragon of virtue, a nature freak, a romantic, a pacifist at heart, but in a world at war he is the best warrior, alert, strong, sure.

Eleven Winnetous, the author, Dirk Kurbjuweit, added, referring to the German soccer team, and we would be world champions.

That was pretty much what Hitler told his troops when he distributed Mays books as object lessons; never mind that May himself had been a vocal pacifist.

Mr. Kurbjuweit also called Winnetou a German with a migration background, a phrase Ive heard used to describe Turks here. Tormented German intellectuals like to ponder whether Mays concept of an edelmensch, his term for a truly noble man, as he called Winnetou, has inspired more feelings of fraternity or of racial superiority in the country. An American today is likelier to wonder how May shaped German views of the United States over the last century.

Immensely, Johannes Zeilinger told me. A hand surgeon by day, Dr. Zeilinger, a 59-year-old May enthusiast, is the curator of a big Karl May exhibition at the Deutsches Historisches Museum in Berlin.

May framed a popular image of North America, with Indians as a dying race, tragically killed off by fate and by the spread of a new empire, he said. The doctor ushered me toward a painting that shows Indians ambushing an oncoming train, trains having signified Manifest Destiny. In Mays books Winnetous loyal sidekick, Old Shatterhand, was a German émigré, a schoolteacher who went West, became a crack shot, had a deadly right jab and, not coincidentally, got work as a surveyor for a railroad company.

Dr. Zeilinger wouldnt go so far as to say that May demonized the United States, which clearly he didnt, although Hans Ottomeyer, the director of the museum, who wandered by to listen in on the conversation at that point, said: May taught Germans that America was a wild place. There were natives and intruders, and he taught us to be suspicious of intruders, half of whom are good, half are very bad. Like all German men, Mr. Ottomeyer, whos 61, lapsed unbidden into recollections of reading Mays books as a boy. Children read him less today, he added. The West used to be on the border of the imagination, he said. Now its a place they see every day, full of conflict and catastrophe.

You might say that May has become a Rorschach of German identity. German natural sympathy for American Indians is rooted in ancient times, Dr. Zeilinger explained. The Roman historian Tacitus described German tribes as uncorrupted, primitive, fierce and at one with nature, a people on the edge of a corrupt and voracious empire. May tapped into that primordial Germanness and also into what became, by the mid-19th century, a growing interest in America and the wider world.

May wrote about the Orient and Africa, too, and, as with the West, claimed to be recounting his own experiences, going so far as to distribute photographs of himself dressed up as Old Shatterhand or as Kara Ben Nemsi, Old Shatterhands doppelgänger in the Ottoman world. He finally made it to the United States at 66, briefly scouring the wilds of Massachusetts and meeting his first Indian near Buffalo before retreating home to Saxony. When he confessed publicly to having cooked everything up, he pitched himself as a homily about a brute turned noble man, the Winnetou myth given a fresh spin.

Dr. Zeilinger showed me a typed collection of Mays adventures in a vitrine of objects from the former East Germany. Communists banned May  too Christian, too popular with Hitler, they said  and they shuttered his house in Radebeul. The typed copies were Wild West versions of samizdat, lovingly made over hundreds of hours by a fan from smuggled May books.

Needing to sate long-standing appetites, East German officials concocted ersatz versions of May tales with imitation Winnetous, and they also filmed May-like adventures in Cuba and Yugoslavia that became runaway hits behind the Iron Curtain.

Mr. Michaelis, the Lonely Man, remembers growing up on these, and on the East German schoolbooks about Indians and the capitalist West.

It was a little bit of adventure, an escape and romantic, he recalled. From the books I saw it was a hard life being an Indian, and I identified with that. Indians could handle any situation with no resources, just like here. All this put the flame in me.

May was finally recuperated by the Communists during the mid-80s, his house reopened alongside a log cabin museum of Indian artifacts and stuffed animals. Rathen, the open-air theater, also got to restage Winnetou plays.

I caught one recently. Beyond slumbering fields of cows and castles, across the Elbe on a little rope-drawn ferry, then through a tiny gingerbread town and a forest of conifers and beech, I climbed into the sandstone cliffs to see The Treasure of Silver Lake. On a rainy afternoon a few hundred hardy children and elderly Germans sat outdoors, watching a Dolph Lundgren lookalike in war paint carrying a spear.

Back here in Radebeul, Mr. Michaelis acknowledged what has clearly evolved into a mix of American Indian and German identities. Im 75 percent Indian but still German, he said. He explained that while he loves his teepee, he has lately taken up an offer to sleep in Karl Mays house because the traffic between Dresden and Meissen has been keeping him awake at night. Then he waved one hand. The Indians made these out of the cotton that perfidious Americans sold them, he said, meaning his teepee. This ones better. Its acrylic. From Saxony.

Lunchtime was approaching, and he recommended a saloon around the corner that sold buffalo burgers. He said he goes there when he can afford to. Tonight hell be cooking on the fire.