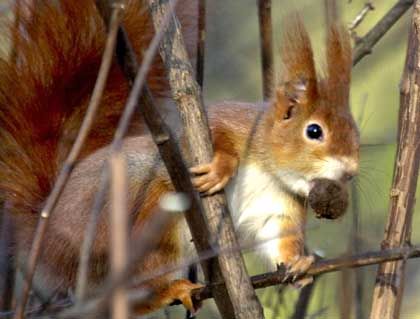 A family of raucous squirrels stormed an elderly couple's home in Germany, triggering an elaborate 90-minute fire brigade operation during which one of the furry red rodents ran up a fireman's leg and perched on his head.

The drama began at 7 a.m. on Tuesday morning when the owner opened his front door to pick up his newspaper. "Suddenly something scuttled through my legs, at first I thought it was rats," said the man, according to a statement by the fire brigade in the northern town of Verden.

The couple tried to shoo out the squirrels -- a mother and her three children -- but only succeeded in chasing the mother out. The abandoned children fled into the cellar and disappeared behind a pile of furniture.

That's when the owners decided to call the local fire brigade. "They didn't know what else to do," said spokesman Michael Folwaczny, part of the crew that rushed to the scene in a fire engine.

"We've had to rescue cats and coax a parrot out of a cage in a burning house before but we've never experienced anything like this," he said.

What followed was a wild hunt around the basement while the distraught squirrel mother ran circles around the house, scratching at windows to get back in and find her young.

The five firemen had to dismantle a bed and a wardrobe to locate the first child, which they managed to grab and lock in a cage.

The second squirrel was tougher to get and wedged itself behind a chest. "The quick-footed animal proved to be cheeky and climbed up a fireman's leg and right up to his head," the statement said.

But after a series of wild leaps and grabs it too was caught, along with the third squirrel, which clung stubbornly to a telescopic rod which a fireman then held up, causing it to slide helplessly into his gloved hand.

"We took them outside and let them go and we think they were reunited with their mother," said Folwacny. He said the owners didn't keep inordinate quantities of nuts in the house and were perplexed why the squirrels tried to move in. "They've got a Hazelnut bush in their garden, maybe that had something to do with it."