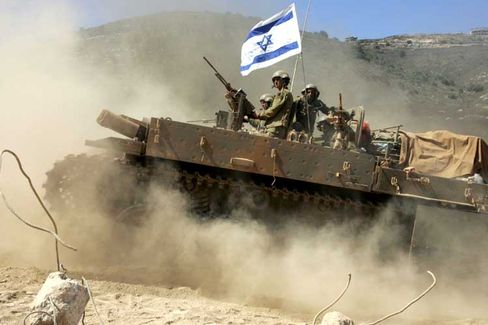 Israeli forces should soon be on their way out of southern Lebanon.

Around a dozen rockets where fired last night at Israeli positions in southern Lebanon, according to an Israeli army spokesman. The attacks were the first time rockets were used after the implementation of the cease-fire on Monday, but Israeli forces did not return fire. Apparently the Israelis are not certain that the rockets -- which caused no casualties -- were the kind used by Islamic militant group Hezbollah.

For now, the cessation of hostilities seems to be holding. The only other serious incident came on Monday as Israeli forces killed four Hezbollah fighters. However, the militants dispute the Israeli account. Fighting has dropped dramatically as the cease-fire takes hold, prompting UN Secretary General Kofi Annan to express his relief.

"I am relieved to note that the cessation of hostilities in Lebanon called for by the Security Council appears to be generally holding," Annan said. "I urge the parties to make every effort, in the interest of the civilian population on both sides, to continue and consolidate the cessation."

A UN Security Council resolution adopted Friday authorized 15,000 UN peacekeepers to help 15,000 Lebanese troops to take control of southern Lebanon. Israel has said it will withdraw its forces so long as the border region is no longer under Hezbollah control.

Meanwhile, diplomatic efforts at the United Nations headquarters in New York have ramped up to try and turn the resolution into an actual peacekeeping force that can be deployed as quickly as possible. At present, it appears as if France would command the mission, which could be made up of troops from up to 20 different nations. Diplomats are expected to hammer out an operational plan on Thursday.

According to reports in the German press on Tuesday, Berlin plans to take part in the mission, but is unlikely to send combat troops. The leaders of Chancellor Angela Merkel's coalition have apparently agreed to limit Germany's participation to sending naval vessels to patrol the Lebanese coast and army engineers to assist with reconstruction efforts.

To shore up the UN peacekeeping mission, the Lebanese army is expected to move into the south of the country and stepwise take over control of the region that has essentially been under Hezbollah's influence since Israel ended its occupation in 2000. However, the Lebanese Defense Minister has said his troops will not be expected to disarm the Hezbollah militia.

Hezbollah leader Hassan Nasrallah said in a televised speech that his fighters would accept the cease-fire, however, they would continue to fight Israeli troops as long as they were on Lebanese territory. After claiming a "strategic, historic victory" he also said it would be "immoral, incorrect and inappropriate" for Hezbollah to disarm.