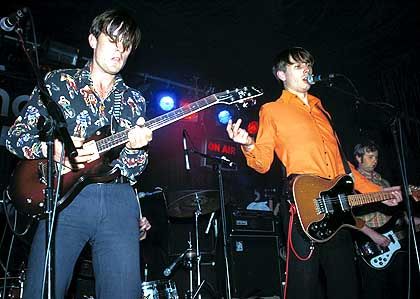 Nick McCarthy of Franz Ferdinand on the left.

In our ongoing effort to provide the highest quality advice possible for those visiting Germany , Survival Bible phoned up the British rockers extraordinaire Franz Ferdinand. The band's guitarist Nick McCarthy, after all, spent his formative years eating Weisswurst and swilling Helles in Bavaria . So what guidance does he have to offer? Here's what McCarthy had to say:

"Well, they're definitely all Nazis aren't they?"

Ok, that wasn't all he had to say. And he really doesn't think the Germans are all Nazis. In fact, right now he thinks Germans are very cool or, in his words, geil.

"I consider myself more German than English really" he says. He moved to Bavaria at age two after his dad landed a job at Daimler Benz and didn't leave until moving to Glasgow five years ago. There, while trying to steal a bottle of vodka at a house party, he almost came to blows with Alex Kapranos, now lead singer of the band. But the two bonded, and rest is rock & roll history.

But, he admits, his German upbringing means he comes in for a bit of goading from his band mates -- perhaps understandable given the UK's propensity for merciless ridicule of all things German. "They definitely give me a hard time about it. But I know how to  how to fight."

And apparently he wins most of those fights. Franz Ferdinand, after all, has plenty of Germanic influences. There's the band name itself -- originally inspired by a racehorse called "The Archduke Ferdinand", but with an awareness of the historical importance of the assassinated Austro-Hungarian. Then there's the song "Darts of Pleasure", with the final refrain Ich heisse superfantastisch, Ich trinke Schampus mit Lachsfisch, Ich heisse superfantastisch....

McCarthy also apparently has a propensity to launch into German monologues during concerts, which his band mates will then translate for a bemused crowd: "He thinks you're all beautiful!"

But what about Germany itself? McCarthy gets almost nostalgic when speaking about his childhood in Bavaria. "As a kid I used to wear lederhosen all the time," he says. "As a really young child, when you went to kindergarten you could shit in them and piss in them and it wouldn't matter. That's why all the beer drinking guys wear them as well! If they shit their pants it doesn't really matter and you can wear them again the next day!"

He acknowledges Britain's playful animosity towards the Germans is still a problem. "It's the most hilarious thing in Britain to make fun of the Germans and the war. It's an endless story."

But the image Germans have of all Brits hating the Teutons also seems to be something of a stereotype. "Most people I hang around with in Britain now always want to go to Germany. Some of the funniest people I know are German. You come across the most bizarre and entertaining people there."

Apparently with good reason according to McCarthy. "The German arts scene right now is really on the forefront. There are amazing artists from Germany that you could only hope for in other parts of the world. Everyone is migrating to Germany it seems.

But, he and his band mates have still yet to embrace Germany's naked sauna culture. "Sauna? Are you joking? No way, I might have grown up in Germany but I am still English with a squeamishness. Taking off all your clothes is not something you do in Britain."

Nick won't be drawn on the subject of German women. Aren't the German groupies a bit special? "There are some 'interesting' girls in Germany," he says dodging the question. But, his evasiveness is understandable: "I'm married to a German! She's beautiful."

So what tips would he give to travelling English football fans this summer, keen to ingratiate themselves with their German hosts? "A good piece of advice is always to just go for a drink with a German. I think that brings people together quite easily. It's a wonderful little drug."

But he won't say whether he prefers smoky Glaswegian pubs to oompah Bavarian beer halls. "I can't say -- that's like asking if green or blue is better. You've got to see them both. I'm sure next time the World Cup will go to Scotland," he says confidently.

So who is going to support if Germany meet England in the quarter-finals? "I think Germany definitely. When you live in Scotland you really go off England. England's a bit of a shithole really."