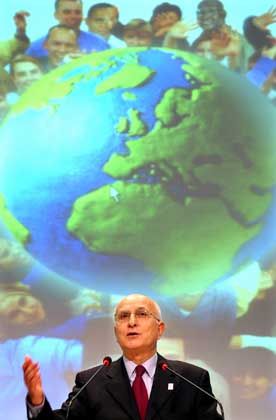 Waging war against the gas guzzlers: EU Environment Commissioner Stavros Dimas is planning to swap his Mercedes for a fuel-efficient Japanese car.

Stavros Dimas, the European Union's environment commissioner, is none too happy with the German government or auto industry.

The European Commission, led by President Jose Manuel Barroso, says it will water down a Dimas-penned plan that would have required auto-makers to create lines of cars that would limit greenhouse gas emissions to an average of 120 grams of CO2 per kilometer by 2012. That's down from an environmentally unfriendly average of about 160 grams today. But Dimas is hatching a revenge plan that, if nothing else, would deal a PR blow to Germany's luxury car industry.

The commissioner is reportedly preparing to swap the gas-guzzling Mercedes sedan that ferries him around Brussels each day with an environmentally friendly Japanese hybrid. The EU is planning to replace its current fleet of luxury sedans, and Dimas is said to be looking at Toyota's Prius hybrid, as well as a higher-end Lexus hybrid made by the same company.

By switching, he could simultaneously serve as a role model for the 27 other EU commissioners while at the same time giving German car-makers -- who have a reputation in Europe as laggards when it comes to implementing environmentally friendly technologies -- a slap in the face. Currently, most of the EU's top brass are shuttled from their homes to their appointments in luxury sedans made by Audi, BMW and Mercedes.

Sources in Brussels told the German news agency DPA that Dimas is leaning towards a Lexus hybrid. The 340-horsepower Lexus emits approximately 186 grams of carbon dioxide per kilometre, whereas the DaimlerChrysler model currently driven spews close to 270 grams of greenhouse gases per kilometer into the atmosphere.

Earlier this week, Dimas riled German politicians with the proposal to hold automakers liable for emissions reductions. This was particularly irritating as German car-makers' most lucrative sector is large luxury sedans. On Tuesday, German Chancellor Angela Merkel said she would oppose any strict EU emissions on car emissions, arguing there should be different caps for different models. A day later, German Economy Minister Michael Glos of the conservative Christian Social Union, the Bavarian sister party of Merkel's Christian Democrats, called any limit on car values "unacceptable to us."

Instead, Barroso will push for a plan that would curb emissions through more aggressive implementation of biofuels, like ethanol, more ecologically sound driving practices as well as measures developed at the EU member state level.

European car-makers have already signed on to a voluntary deal with the EU to cut emissions in new models to an average of 140 grams of carbon dioxide per kilometer by 2008, but Brussels officials say that target is unlikely to be met. Though those plans appeared to have been scuppered this week, the EU has repeatedly threatened to codify more stringent cuts.

The European Environment Agency says that, although automakers have cut emissions in cars by 13 percent, auto emissions are still dangerously high. In 2004, passenger cars and vans still made up 14 percent of all carbon dioxide emissions in Europe, and emissions from road transport have risen by 22 percent since 1990.

Environmentalists are now attacking the European Commission for not taking more aggressive steps against car-makers. "By placing a disproportionate emphasis on fuel quality, the Commission is diverting attention from the real problem -- the cars that use the fuel," said Claude Turmes, the energy spokesman for the Green Party faction in the European Parliament, according to the Associated Press.

"Focusing on fuel quality alone to address emissions from road transport is like trying to quench a forest fire with a water pistol," she said.