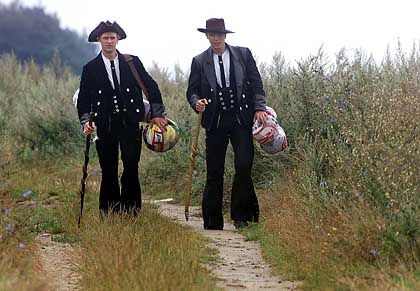 They may look a little strange, but be nice to them.

One of the first things visitors to Berlin will notice is the surprisingly high number of panhandlers. For a cradle-to-the-grave welfare nation such as Germany, the begging punks (complete with packs of pet mongrels), the wobbling drunks and the newspaper hawking homeless seem a bit out of place. Given the swarms that sometimes hang around the train stations, it's easy in Berlin to develop a huge blind spot -- such that you no longer even take note of large black dogs, spiky red Mohawks and older men shuffling towards you with arms full of street sheets.

But don't build your wall too high. Otherwise, you're likely to miss a German charm that is quickly disappearing. Dressed in a black slouch hat, a double-breasted vest with huge white buttons and black corduroy bell-bottom pants, those rather oddly-packaged folks you might see hitchhiking or asking for money in a café are actually Germany's most endangered species, the Gesellen -- or journeymen. Encountering one is a rare treat -- and if you do, ignore that impulse to ignore them. Instead, you should separate yourself from some of your loose pocket change and support one of the great traditions of German craftsmanship.

Since the Middle Ages, German craftsmen have gone auf der Walz -- or taken to the road -- a kind of working-pilgrimage that artisans make after completing an apprenticeship with a master craftsman. Most of the Gesellen are carpenters, cabinet-makers, roofers, tile layers, masons or plumbers, and their travels are meant to teach them about work and life. Kind of like an American Field Service for craftsmen. It also provides them with the practical skills they need to become master craftsmen themselves upon completion of their adventure. Historically, artisans weren't even considered for entry into their respective guilds before going auf die Walz.

The odyssey takes precisely three years and one day and can often take the young craftsmen and women (all must be under the age of 30) halfway around the world. Like the runaways Huckleberry Finn and Tom Sawyer, those departing on their journey are allowed only a small rucksack. Other than that, they can bring along their uniform -- the purpose-tailored Kluft suits that protect them from their working environs -- tools, undergarments, a sleeping bag, a book and their trademark walking stick.

While on the road, journeymen make a living by doing day jobs and other temporary work for master craftspeople who pay them a wage and often provide them a place to stay for short periods of time. The Gesellen also accept donations that help them to complete their trip. One thing they aren't allowed to do, however, is go home for a visit. The tradition's strict rules -- which also forbid Gesellen from carrying mobile phones or other trappings of modernity -- require that they not come within 50 kilometers of their hometowns while on the Walz, unless an immediate family member has headed for the great workshop in the sky.

Though the peculiar tradition of journeymanships is on the verge of extinction -- according to the weekly newspaper Welt am Sonntag, there were only 250 of them making their way around the world in 2005 -- they are proud of their history, which began in the 13th century and has grown to encompass its own songs and even beer drinking rituals. Their travels take them across Germany, Europe and even further abroad.

Many of the Gesellen who do still exist, though, are constantly criss-crossing Germany, but the most likely place to run into one is Hamburg -- where work is plenty. A local organization in the city has also created a small hostel for journeymen and wages are higher than in most other parts of a country plagued by unemployment. Indeed, many of the young people who go auf die Walz, do so not only to gain experience, but also to buy time before entering a crowded labor market.