The French blockbuster "Amelie," may have made him trendy abroad in recent years, but nanus hortorum vulgaris, has been a regular fixture in German culture for more than a century. Created in 1872 in the small town of Graefenroda in the German state of Thuringia, none of the kobolds, trolls and sprites that populate Teutonic mythology has endeared itself to Germans like the common garden gnome. Experts estimate that some 25 million of the glazed ceramic creatures now inhabit German living rooms and perfectly manicured flower beds.

But the common garden gnome has fallen on hard times in recent years, his reputation tarnished by campaigns led by mean-spirited elitist intellectuals and even perverts. To intellectuals and other touchy types, he's despised as the embodiment of kitsch and petit-bourgeois parochialism. Some outsiders have even sought to savage the image of the gnome by plunging him into a world of decadence, violence, and sex. There are pornographic gnomes, one-eared Van Gogh gnomes and "Scream" versions à la Edvard Munch.

The press routinely reports shocking attacks even on harmless outdoor gnomes. Vandalism is rampant. At the same time, law enforcers are continually called upon to take action against bare-bottomed or genitally exposed "gross-out gnomes". Gnome theft, too, is spreading in leaps and bounds. Berlin's "Dwarf Mother" recently lamented the theft of 50 of her gnomes. It's possible they were taken to France, where the Garden Gnome Liberation Front abducts supposedly enslaved gnomes and releases them back into their natural habitat. 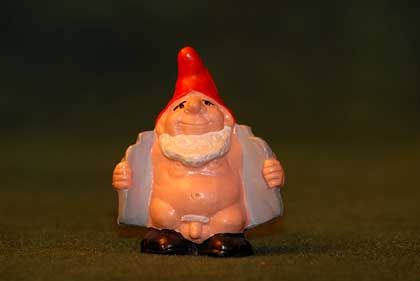 But the garden gnome has some strong backers who are fighting to restore his reputation, led by Fritz Friedmann of the satirical International Society for the Protection of Garden Gnomes. Friedmann has fought for the humane treatment of the garden gnome since 1980. He advocates a strict ban on lawn mowers, leads crusades against casually urinating cats and vehemently opposes the exploitation of gnomes in condom ads and other sexual connotations. At the end of the day, he wants to restore the clean image of the gnomes, which are seen by many Germans as a monument to German sentiment and lifestyle.