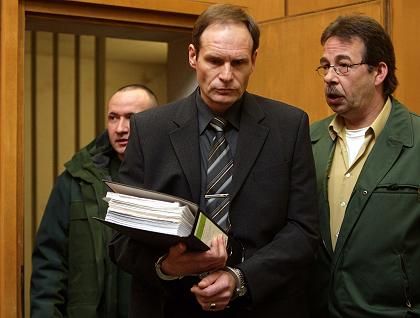 Armin Meiwes, the German cannibal standing trial for the second time for killing and eating 44 pounds of flesh from a man who wanted to be eaten, is so fixated on male human meat that he could kill again, a psychiatrist told the court on Monday.

Georg Stolpmann, professor of psychiatry at Göttingen university who examined Meiwes, told the Frankfurt district court that he saw a "very high danger of a repeat" and that Meiwes, 44, had a "severely disturbed soul."

Meiwes is facing a retrial after Germany's top criminal appeals court ruled that his original manslaughter verdict and sentence of eight-and-a-half years were too lenient. It ordered a retrial on murder charges. Monday's testimony marked the end of the evidence-hearing phase and the verdict is expected on May 9 after the defence and prosecution sum up.

The case sparked grim fascination around the world when it came to light in 2002 and confronted the German legal system with an unprecedented dilemma -- whether killing a man who wants to be eaten can constitute murder. Meiwes said during his retrial: "I wanted to eat him but I didn't want to kill him." He said he had fantasized since puberty about consuming a man to fill the void caused by the sudden departure of his father. Using the pseudonym "Franky," he had been in touch with hundreds of people on the Internet, where he posted ads seeking fit men for "slaughter."

Meiwes, a computer repair man long obsessed with cannibalism, gave a full confession at his first trial. He met 43-year-old Berlin computer engineer Bernd-Juergen Brandes via the Internet where Brandes had sought someone to kill and eat him. The details of the case were so gory that many newspapers declined to print how Meiwes mutilated his victim's body at the latter's request and how they both tried to eat parts of it.

Once Brandes had lost consciousness from loss of blood, Meiwes killed him on a special butchers bench he had set up in a "slaughtering room" in his rambling, half-timbered house in Rotenburg, central Germany. He suspended the body from a meat hook and disembowelled it, filming everything on a high quality video camera. The film was shown to the shocked court.

Meiwes was caught in December 2002, almost two years after the deed, when police received a tip-off that he was seeking victims for slaughter. Stolpmann said the fact that Meiwes continued to look for willing victims after killing Brandes showed he was ready to kill again. He said he had no indications that Meiwes was any less prone to kill than before.

Stolpmann said Meiwes had told him that even as he was cutting up Brandes, he had thought to himself: "The next one mustn't be this fat."