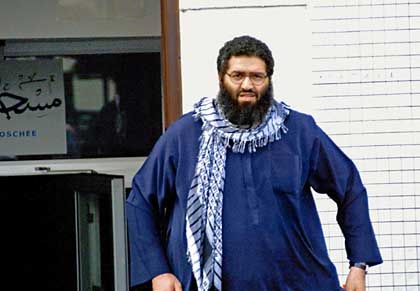 The Syrian-born German citizen Mohammed Haydar Zammar has been sentenced to 12 years in prison by a court in Damascus. The National Organization for Human Rights in Syria announced that the verdict had been handed down by the Higher State Security Court on Sunday. Zammar was accused of being a member of the banned Muslim Brotherhood, a crime that is punishable by death in Syria. The court, which is used for political cases, initially sentenced Zammar to life imprisonment but commuted it to 12 years.

The Syrian human rights group did not give the reason for the commuting of the sentence. Zammar's German citizenship and the fact that German diplomats were closely monitoring the trial may have gone some way toward saving him from the gallows.

Zammar was part of the Islamist scene in Hamburg in the late 1990s and traveled to Afghanistan frequently. He was friends with members of the terrorist cell, led by Mohammed Atta, which carried out the Sept. 11 attacks on New York and Washington and was suspected by the US and German intelligence agencies of having introduced Atta to al-Qaida leaders in Afghanistan.

Zammar had come to the attention of the German authorities long before 9/11, and when his friends were identified as having carried out the attacks he was brought in for questioning but was freed for lack of evidence. However, when he traveled to Morocco shortly afterwards, he was snatched by CIA officers, making him one of the first victims of "extraordinary renditions." Two weeks later US officials delivered him to a jail in Syria, a country that practices torture, and that Washington has branded part of the "Axis of Evil."

Reuters reports that the human rights activist Ammar al-Kurabi described the ruling as unjust, saying that the membership charge had been brought against him because there had been no proof linking Zammar with the 9/11 terror attacks. Syria waged a fierce crackdown on the Muslim Brotherhood in the early 1980s, during which thousands died, and Islamic fundamentalism is fiercely repressed in the country.

Now Germany's role in the abduction and conviction of one of its own citizens is coming under the scrutiny of a parliamentary investigative committee. German intelligence agencies tipped off the CIA about Zammar's travel plans in Morocco and German security officials were permitted to interrogate Zammar in his Damascus jail in late 2002. And some of the incriminating evidence used to prosecute Zammar in Syria is alleged to have come directly from Germany's Federal Criminal Police Office (BKA).