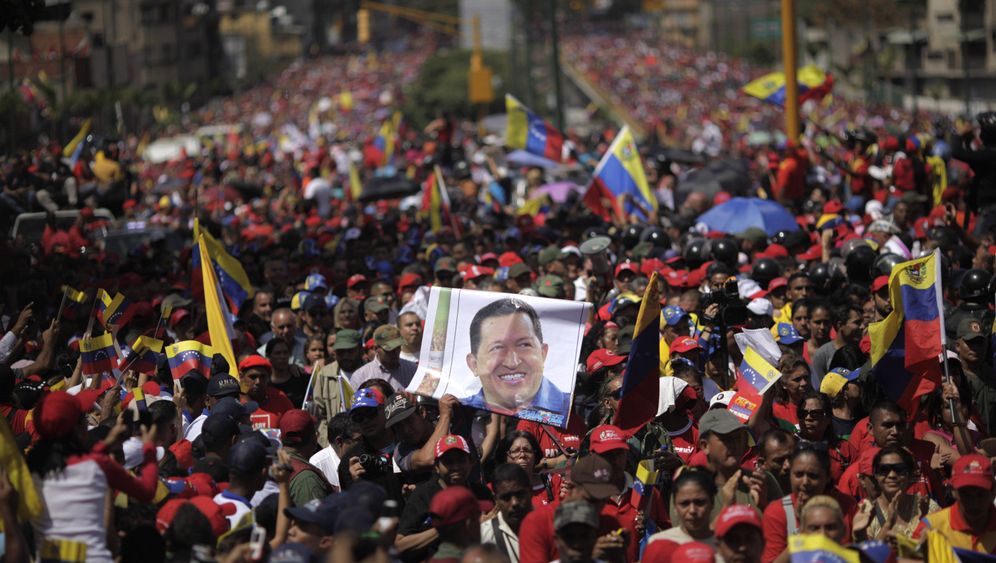 Hundreds of thousands of Venezuelans marched through the streets of Caracas on Wednesday, following the hearse carrying their deceased leader, President Hugo Chávez. The death of the socialist leader has turned the world's attention to the South American country, with observers pondering which political direction the country will now take.

Chávez died Tuesday at the age of 58 after a battle with cancer. His body is lying in state at a military academy in Caracas until Friday, when a state funeral is planned.

The news agency Reuters reported Wednesday that 40-year-old Henrique Capriles has been chosen by the Venezuelan opposition to run in an upcoming presidential election, which according to the country's constitution, must take place within the next 30 days. Capriles ran against Chávez in the presidential election in October 2012, losing to the terminally ill president, but winning 44 percent of the vote -- the highest percentage an opposition candidate had ever achieved against the leader, who was in power for over a decade.

Nicolás Maduro, Chávez's chosen successor and vice president, has stepped in to serve as acting president. The former bus driver and union leader had a strong lead over Capriles in recent polls, and observers expect he will benefit from the outpouring of grief and emotion over Chávez's death. On Wednesday, he stood next to Chávez's coffin and hugged mourners.

The response from world leaders to Chávez's death varied this week, with German Foreign Minister Guido Westerwelle saying that the country "has great potential, and democracy and freedom are the right paths to realize this potential."

German commentators weighed in on the future of Venezuela Thursday. Here are some of their thoughts:

"His greatest aim was that of completing the project begun by Simon Bolivar. But now, Hugo Chávez, who had wanted to unite Latin America, has left behind deep rifts in his own country. There seem to be no bridges over the deep gulf separating the 'Chavistas' and the 'Anti-chavistas' -- no common ground. That makes the situation after the death of President Hugo Chávez dangerous, even explosive."

"The opposition bears a certain amount of responsibility for this situation. Following Chávez's first election victory in December 1998, it took them years to come to terms with the fact that the victor came from outside the political establishment…. But most of the blame for the extreme polarization of Venezuelan society lies at the feet of Chávez himself. As soon as he assumed office, he pushed through a new constitution, granting himself more power, weakening the judiciary and virtually eliminating most democratic checks and balances. Here the leader, there the people…. Chávez saw everything in between -- political parties and state institutions included -- as nothing more than impediments."

"The country faces difficult times. Within 30 days, Chavez's successor will be elected. The candidate of the 'Chavistas' has neither the charisma nor the popularity of the deceased president. And even if he manages to win the election, discontent in the leftist camp is bound to rise. The country's economic problems, after all, cannot be quickly solved, and they are likely to worsen in the near future. On the other hand, it is unclear whether the 'Chavistas' would accept an election victory of the current opposition leader … without a fight. Should he win, a military coup d'etat cannot be ruled out. The army, to be sure, does not have a political platform, but it does have a lot to lose. They profited from the Chávez regime to at least as great a degree as did the country's poor."

"Worldwide he became the idol of globalization critics, while at home the masses cheered him on, and they will not be silenced by his death. Chávez's legacy is increasing the confidence of the poor and those without a voice. His rise was a product of past conditions: the domination of post-colonial powers and their marionettes who took turns in power. Not even the opposition in Venezuela wants this back."

"But Chávez's biggest motivation came from his biggest flaw -- his narcissism …. He is the typical Latin American leader, one of the caudillos (an authoritarian political-military leader) who have ranged from Juan Perón to Fidel Castro. During Chávez's rule in Venezuela, anyone who wasn't for him was considered to be against him. Inside his oil-financed welfare system, justice grew more slowly than the political machine. And, economically, Venezuela has yet to build a modern and productive society. These shortcomings hindered his socialist movement from being exported, as Chávez had dreamed."

"Ultimately, Chavez was not the builder of a new Latin America, but a man of transition, a caudillo who came in at the beginning of the era of their elimination. Many countries have seen the masses emerge as an inquisitive, confident and ambitious middle class that is less and less willing to follow leaders of the old school."

"The left in Latin America has lost its charismatic leader. Fidel Castro has long been too old for the role. It is unbelievable that, in Latin America, men of his ilk rise to the top again and again. Men who lie, cheat, kill and encourage killing, who don't follow any rules, don't keep any agreements, promote chaos and insecurity, and are still revered by a large segment of their population -- and are even adored like a god. Maybe Latin American intellectuals bear a good deal of the blame, because they celebrate these types in their novels more often than they judge them."

"Chávez had two sides: On the one side was the concerned father of the nation, on the other, an uncontrolled power monger who unnecessarily led his country to the Mullah-regime in Iran. How rampant must the anti-American sentiment be to justify that?"

"His death is stirring up a lot of emotion in the region. Latin America will develop in a better way if the left fails to produce another charismatic leader like him."

"Hugo Chávez, the elected but authoritarian left-wing populist, was successful in that he mobilized other leftist governments and the old communists in Cuba to create a front against Washington, the rule of law and the market economy. The 'Bolivarian Alliance for the Peoples of Our America' was his work and instrument and, under the leadership of the oil exporter Venezuela, anti-Americanism and the struggle against the existing world order found a new stage. But he also opened the region's door to a regime like Iran, in which he saw a reliable ally against the United States."

"Chávez's importance and influence, which Europe has often failed to recognize due to his odd appearances, have been proven by the popularity of his populism in Latin America. Some of this resonance is due to an anti-American reflex, for which the United States is partly to blame. At any rate, the leftists in the region saw him as a new figurehead, and he revived them. The fact that '21st-century socialism' bore little or no fruit in his own country apparently did little to destroy his reputation as a great Latin American. But it remains to be seen if this will last.... Is a new beginning even possible, though?"