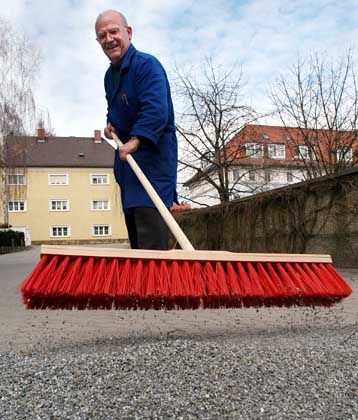 Sweep for your life!

Now, I may well be an Eastern European with a broom fixation, but this still feels weird to me. It's a simple story: Once a year it is autumn and all the leaves fall out of the trees and onto the pavements in front of people's homes. Eventually, they have to be swept, piled up and carried away.

Wait, did I say it was a simple story? Sorry. When something seems simple, count on a German to complicate it.

I live in the small suburb of a Bavarian town. One fall morning the guys from the local public-works department were sent to clean the street behind and around our building. It's just an alley at best, hardly used by anyone, except some five-year-olds strolling with their mothers once every two weeks when its not raining. Sometimes I can count a dozen leaves lying along the curb. But these guys had very clear orders to sweep the street, so they werent going to be discouraged by details -- like the fact that there was nothing to sweep. God forbid there should be some blades of grass peering out from between those two slabs of stone!

They showed up at 6 a.m. in a lumpy, noisy, orange diesel truck with a rotating brush underneath. Obviously, this didn't fit around every corner. Plus there were cars parked everywhere.They maneuvered the truck up and down the street until about noon, with no visible result.

Frustrated, they resorted to planting a few No Parking and Well be back tomorrow at 6 a.m. signs around, and left. The only problem was that, this being a small village with very narrow streets and an incredible number of car owners, there was no place for people to move their cars. So the orange, noisy diesel dragon showed up once more at 6 a.m. the following morning (I was completely freaked out by then), but still could not polish the asphalt to a degree of cleanliness that they found satisfactory. At last they gave up and left some dust and leaves under a car whose owners were probably on vacation.

Then they turned their attention to the pedestrian alley behind my house. Three individuals armed with motorized machines started raising hell. One of them shifted the leaves with a leaf-blower that could wake the dead, another daintily brushed them into piles, though they continued to get entangled in his brush, and another showed up with a truck onto which they eventually loaded the leaves. By 3 p.m., I honestly couldnt see any difference in street appearance.

Let me recap: It took three people almost eight hours, God-knows-how-many gallons of gas, earmuffs, professional equipment worth tens of thousands of euros, to cause a huge public nuisance and clean a street that one worker with a broom would have finished in about a quarter of the time -- breakfast and jolly whistling included.

This never ceases to amaze me.