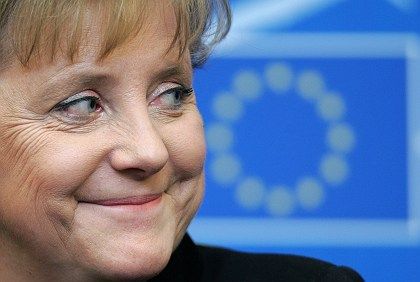 It has been a busy year already for the European Union. In early January, both Bulgaria and Romania joined what is now a 27-member bloc. Last week, Juan Manuel Barroso announced a new EU effort to come up with a common energy strategy. And throughout it all, German Chancellor Angela Merkel has been getting her feet wet as she launches Germany's six-month stint at the head of the bloc.

On Wednesday, Merkel was in Strasbourg for her first address to the European Parliament in her new capacity. And if she has her way, Europe's schedule will stay busy as long as Germany is at the helm.

Her list is long and ambitious, including a timetable for passage of an EU constitution, a partnership agreement with Russia, and a greater European presence on the international stage, with a particular emphasis on restarting Middle East peace talks. But in a speech dotted with references to the "essence of Europe" and the search for "Europe's soul," it is clear that increased European integration is a priority.

"The reflection pause is over," she told the gathered delegates, a reference to the break in the process of ratifying the constitution triggered by France and the Netherlands rejecting the document in 2005. "By June, we must reach a decision on what to do with the constitution. It is in the interest of Europe to end this process successfully by the next European elections in 2009."

But Merkel is also looking further afield -- especially toward the east. In addition to reviving the Doha global trade talks, Merkel also would like the EU to focus on establishing a partnership deal with Russia. Moscow's shutting off oil supplies to a number of countries in Central Europe last week -- part of a price dispute with Belarus -- was an eye-opener to an EU that already views Russia with some suspicion. Reliable ties are vital, Merkel said on Wednesday.

"The partnership with Russia is strategically important for Europe," she said. "It should be expanded as far as possible. And for that, a new partnership and cooperation treaty must be negotiated."

In outlining her foreign policy goals, Merkel once again urged the EU to be the motor behind a revived Middle East peace process. She called for the Middle East Quartet, made up of the EU, the US, the UN and Russia, to resume negotiations in the region. Europe must also help find a solution for Afghanistan as well, she said.

For those countries hoping to join the EU in the near future, Merkel had little encouragement. "The wish of many countries to join the EU can not always be fulfilled," Merkel said. "A foreign policy specifically focused on neighboring countries is a reasonable, attractive alternative. We will develop it especially for the Black Sea region and Central Asia." Merkel did not clarify whether that included Turkey.