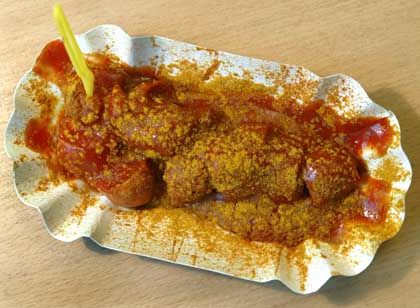 Tempted? A typical Currywurst, consisting of fried sausage sliced up and covered in ketchup and a mild curry powder.

For more adventurous World Cup fans who dont want to live off McDonalds, Burger King and Kentucky Fried Chicken and would rather experience some German takeaway food, here's a useful guide on what to try -- and what to avoid.

The typical German "Imbiss" or "Schnellimbiss" is a fast-food shop, stand or trailer and you'll see them in every city or village as well as in and around soccer stadiums.

To save valuable time and avoid culinary errors when scrutinizing perplexing menu boards, here's a list of dishes in no particular order.

The famous Frankfurter is an example of a bockwurst and a firm favorite among snacks. Literally hundreds of types are available but all basically are pork and beef (turkey is also getting popular) boiled in brine. It's the classic hot dog sausage -- cheap, cheerful and not to be missed.

Your standard fried sausage usually served with a half a slice of rather dry and tasteless white bread.

Same as above served in a crispy bread roll.

Dont get your hopes up too much -- this is no Tikka Massala and it doesnt taste anything like curry. Basically, it's a Bratwurst (see above) which has been sliced up in a special machine with a dollop of luke-warm so-called curry ketchup ladled over it, and if your lucky with a dusting of mild curry powder and the obligatory half slice of dried out white bread. 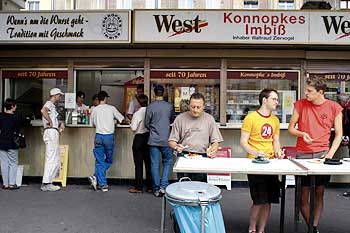 A kind of home-made hamburger or rissole, usually made from a mixture of minced beef and pork. Sadly, the quality spectrum can be disturbingly wide varying from mass-produced patties which Im sure taste not unlike cat food (they certainly look like it) to the delicious meaty home-made ones that are a pleasure to eat, again usually served with a half slice of bread or a roll. Frikadellen can also be found under the name Bouletten and is sometimes served with Nudelsalat (pasta salad) or Krautsalat (a kind of coleslaw without mayonnaise).

Roasted chicken can often be found at take-away stands as Halbes Hähnchen. Normally well seasoned with paprika and salt. Traditionally, Germans eat this dish with a side of French fries.

Another variation on the ubiquitous Bratwurst, this time with its origins in Poland, generally a bit richer with a reasonable garlic content.

This is not for squeamish palates. It's basically the German version of Tartar and consists of raw minced pork seasoned with salt, pepper and nutmeg and served on rolls often topped with raw onions. Now that may sound revolting to many but it is widely considered a specialty because good mett is quite expensive and often really delicious. For obvious reasons it must be very fresh and is best eaten the day you buy it.

Chips (or French fries if you're an American) are called Pommes Frites" in Germany. You can seldom go wrong here. However, here are a few words of warning about the accompanying condiments:

1)  Vinegar (Essig) on your chips is a No-No. Dont even ask for it. If you do you will get a look of disgust followed by a clear non-brewed condiment better suited to a chemistry lab then a kitchen. The one exception here would be Irish pubs (of which there are many) and who usually have the real thing.

2) The norm is Pommes mit Mayo (chips with mayonnaise). This may not be to everyone's taste. Ketchup is obviously also available. If you want both ketchup and mayonnaise ask for "Pommes Rot-Weiss" (red-white chips). For the financially challenged, please note that if youre down to your last few euro cents and are just able to stretch them to buy a portion of chips, remember the ketchup and mayo cost extra (usually around 30 cents)!

This is a staple of the German gastronomy trade and is offered almost everywhere. Basically its an escalope of pork coated in bread crumbs and usually deep fried. Many middle class restaurants have loads of variations on Schnitzels like Schnitzel Hawaii" (an escalope topped with cheese and pineapple and put under a hot grill) or Zwiebel Schnitzel (escalope buried under a heap of crispy fried onions). If you don't want your Schnitzel breaded, look for Schnitzel Natur. The list goes on and on. Here are the three most common variants:

1) Wiener Schnitzel (Vienna Style). Classically a breaded veal escalope, but nine times out of ten its pork here, usually served with a wedge of lemon and chips and no sauce.

3) Zigeuner Schnitzel (Gypsy style). This breaded escalope is served with a sweet and sour sauce which usually contains a lot of sliced red and green peppers.

Noodles from Germany's Swabian region, often home-made and served as an accompaniment with stews or goulasch and most popular in southern Germany.

An oven roast knuckle of pork considered a delicacy especially in Bavaria and southern Germany. It's huge and looks very challenging with a lot of bone in it, but the meat is very tasty and well worth a try if you're feeling adventurous.

Contributed by British ex-pat Neil Hunter, who has been living in Germany just outside Dortmund since 1987.