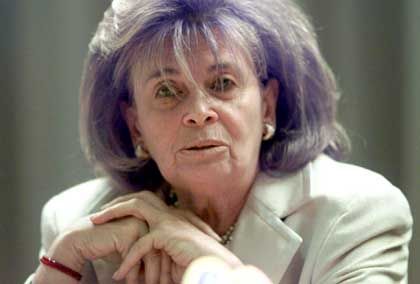 Charlotte Knobloch was elected president of the German Jewish Council in June.

SPIEGEL ONLINE: German foreign policy is facing a watershed. German soldiers are being stationed in the Middle East as part of the United Nations peacekeeping mission in southern Lebanon. Do you think this is right?

Knobloch: I see a watershed for Israel, not for Germany. I was very surprised by the Israeli government's decision to request such military participation from Germany. And the decision was certainly not taken hastily. That's why the watershed in Israel is much greater than the one in Germany. We know what happens in other cases: Performing Richard Wagner's music is still a problem in Israel, for example.

SPIEGEL ONLINE: Even when former German president Johannes Rau held a speech in the Knesset in German in 2000, many members of the Israeli parliament left the room. That makes the deployment of German troops on the Israeli border all the more momentous. Conservative Bavarian premier Edmund Stoiber and the Free Democrats (FDP) are skeptical about the project. Can you understand them?

Knobloch: I belong to a generation that has very powerful negative memories of uniforms. And it's the same for many people in Israel. But today the issue is peace, and that's what's essential. It means I have to jump over my own shadow and come out in favor of German troops being sent to the Middle East. But it's an interesting development that German soldiers will now protect Israel -- especially considering the past.

SPIEGEL ONLINE: Some talk about a normalization of German foreign policy.

Knobloch: No, I certainly don't see it as normalization. The ball is in the German government's court, both politically and militarily. Of course now that Israel has approached the German government, Germany has to make a decision. I see a possibility for Germany to contribute very intensively to creating peace in the Middle East.

Knobloch: My assessment is more positive now that Hezbollah leader Hassan Nasrallah has announced he wants to negotiate about an exchange of prisoners. Nasrallah himself now thinks the kidnapping of the two Israeli soldiers was a mistake. I know that some Israelis are surprised by the way their country proceeded militarily.

SPIEGEL ONLINE: An exchange of prisoners would perhaps have been possible without war in Lebanon.

Knobloch: It's always difficult to criticize something from the position of an outside observer.

SPIEGEL ONLINE: One of your daughters lives in Israel. How have you been staying in touch during the past months?

Knobloch: We spoke on the phone several times a day. If Katyusha rockets had reached Tel Aviv, my daughter and my grandchildren would have been in serious danger. I was very worried. My grandchildren are reservists, but they weren't called up. That diplomacy has brought about this cease-fire is reason to be glad.

SPIEGEL ONLINE: Will the cease-fire last?

Knobloch: The Israeli government is dealing with partners who don't always keep their promises. I look toward the future skeptically, but still with hope.

SPIEGEL ONLINE: What's your assessment of Iran's behavior in the region? Can Iranian President Mahmoud Ahmadinejad still be prevented from realizing his nuclear ambitions?

Knobloch: Maybe UN Secretary General Kofi Annan can achieve something in direct talks with Ahmadinejad during his upcoming visit to Tehran. But the diplomacy that made everyone so hopeful has now reached an impasse. I'm not surprised. There was really only ever a small glimmer of hope. All in all, the current situation reminds me of the failed appeasement policy towards Hitler. History just repeats itself over and over. And we should learn from that.

SPIEGEL ONLINE: During the war in Lebanon, German writer and Nobel Prize laureate Günter Grass surprised everyone by confessing he was once a member of the Waffen SS. Could you have imagined that?

Knobloch: I was completely surprised. Then again, Günter Grass always struck me as a somewhat elusive character. But I never thought in this fashion. Maybe it's just clever marketing for his book -- the timing of his confession does raise a few questions, after all.

SPIEGEL ONLINE: You were being hidden by a Catholic farmwoman in Franconia while Grass was defending the Führer with the SS tank division "Frundsberg." Why did this woman help you while millions of Germans were indifferent or caught up in all, like Günter Grass?

Knobloch: The woman came from a very religious rural family. Her two brothers were on the front, in Russia and in Africa. She thought they would come back from the war unharmed if she did a good deed. That was the reason she protected me -- the only reason. Later she rejected all kinds of honorary awards, because she felt she had already been rewarded by the return of her brothers.

SPIEGEL ONLINE: After the war you thought about emigrating to the United States. Did you ever regret not having gone?

Knobloch: Never. I never regretted it. On the contrary: Today I'm glad. Life has rewarded me for the fact that my husband and I never left. I last thought that when I was elected president of the German Jewish Council.

SPIEGEL ONLINE: When you took office you said one of the main focuses of your work would be the struggle against right-wing extremism. Has the conflict in the Middle East worsened anti-Semitic attitudes in Germany?

Knobloch: It has, unfortunately. I see an absolutely hostile attitude towards Jews and Israel. Signs that read "Israel -- Child Murderers" are being carried through the streets at demonstrations here, for example. The police don't confiscate these placards. Persons that deal with the issue only marginally, or not at all, are influenced negatively. That's the basis of this hostile attitude. You can find it everywhere. We're currently organizing a fundraising concert, for example, and even there we get negative, anti-Semitic mail. No distinctions are made. We're sucked into the current Middle East conflict one hundred percent, as Jewish citizens in Germany. And those politicians who latch onto this hostile mood with carefully prepared statements are of course doing better than ever.

SPIEGEL ONLINE: Who do you mean?

Knobloch: Oskar Lafontaine, the leader of the Left Party, for example. Left Party parliamentarians aren't particularly objective in their evaluation of the catastrophe in the Middle East. I'm also thinking of Heidemarie Wieczorek-Zeul, the Minister of Economic Aid and Development and member of the Social Democrat Party (SPD). These people encourage the hostile mood against Jews. I've never experienced anything quite like this. It's on a new level. This hostile mood is now more noticeable in the German public than it used to be. It's infiltrated every group and every level of society. I hope this development can be reversed by a joint effort on the part of all democratic forces. Otherwise all the positive images I have about Germany would be put into question. I unpacked my suitcase in this country. And I don't want to have to repack it.