So far, there has been little official information about the man who killed 10 people in the city of Hanau, Germany, near Frankfurt on Wednesday night before killing himself in what German federal prosecutors are treating as a possible terrorist attack. However, texts and videos left behind by the suspected killer as well as the assessment of the police suggest strongly that Tobias R. held a deeply skewed vision of the world informed by racist and right-wing extremist views.

According to his own statements, the man, who was born in Hanau, led an inconspicuous, middle-class life. After finishing high school and his mandatory civil service, he first trained to become a banker and later studied business at a college in the city of Bayreuth. In his writings, he indicated that he had never had a girlfriend or a wife. There have been few details released thus far about his private life.

DER SPIEGEL has learned that the 43-year-old suspect had no record with either the police or the domestic intelligence agency responsible for monitoring right-wing extremism in Germany. Peter Beuth, the interior minister of Hesse, the state where Hanau is located, said that authorities believe far-right extremism was the motive in the crime and that suspect Tobias R. was a militant racist.

That appears to be consistent with the statements made by the alleged perpetrator in Hanau in a confession letter he published on the internet before the crime took place. In the 24-page document, which DER SPIEGEL has obtained, Tobias R. wrote about his life, supposed insights and his ideological convictions. DER SPIEGEL has also learned that investigators believe the document is authentic.

In it, the 43-year-old wrote about how he believes that thousands of Germans are being monitored by some ominous secret service. He wrote that the intelligence service has employees "who are able to read the mind of another person and are also able to 'take control of them'" and "sort of 'remote control' them" from afar.

The feeling of being watched, he wrote, is one he had throughout his entire childhood and youth. Later, at the age of 22, that suspicion evolved into certitude, he wrote.

A large part of the letter is dedicated to explaining Tobias R.’s racist and right-wing extremist worldview. Even as a young man, he wrote, he had already developed the belief that the "bad behavior of certain ethnic groups” was a problem. He also claimed in the document that Islam is "destructive.”

As absurd as many of his views may be, long passages are coherently formulated. The letter reveals the crude worldview of a virulent racist who also appears to have been suffering deep psychological problems.

"These people are outwardly inherently objectionable and have also proven themselves historically incapable,” he wrote of immigrants. "Conversely, I came to know my own people as a country in which the best and most beautiful things in the world are born and grown.” The Germans, he wrote, "would have elevated all of humanity.”

He also listed more than two dozen countries whose populations he believes ought to be exterminated and speculates on the question of how many Germans are "purebreads and valuable” ("I could imagine a halving of the population”).  R. also raised the question of whether humanity as a whole is a "victorious species,” that could at some point answer the question of "what is actually going on here?”

One passage about time travel underscores just how irrational his thought was. "In addition, we have to fly through a ‘time warp’ and destroy the planet we call home before the first life emerged many billions of years ago. Because we can’t let everything that has happened on this earth, the millions of times people have suffered, stand as it is.”

R.’s manifesto also mentions the famous German football trainer Jürgen Klopp, Hollywood movies, the German Football Association and lectures at the University of Bayreuth. The letter delves deep into the question of whether the "complete annihilation” of entire countries can be legitimate, when the United States will be replaced as a global superpower and the technologies that will do the most to transform the 21st century.

The future role that will be played by China also features prominently in the manifesto. Finally, the author explained a kind of long-term military strategy with the help the U.S. and its allies for winning a war he claimed is inevitable.

"The Privilege of Exercising My Brain Capacity”

In his manifesto, R. also revealed that he is a supporter of the current U.S. president. In addition to taking up Donald Trump’s idea of building a wall between the U.S. and Mexico, he also wrote that the billionaire should "take the helm since his personality makes him the person most capable of setting the agenda in the U.S.”

R. was convinced that Trump is already implementing his ideas, albeit unwittingly "through the so-called remote control.” It all fits in with a message that R. sent to the American people in a video. In it, he warned of secret underground military bases. "In some of them, they worship the devil himself. They abuse, torture and kill little children.”

To the very end, Tobias R. apparently had no doubts about his ideas or about his sanity. On the next to the last page of his letter, he wrote: "I have thus been privileged to think in terms of these milestones over the past 18 years and to train my brain capacity based on these strategic cues." 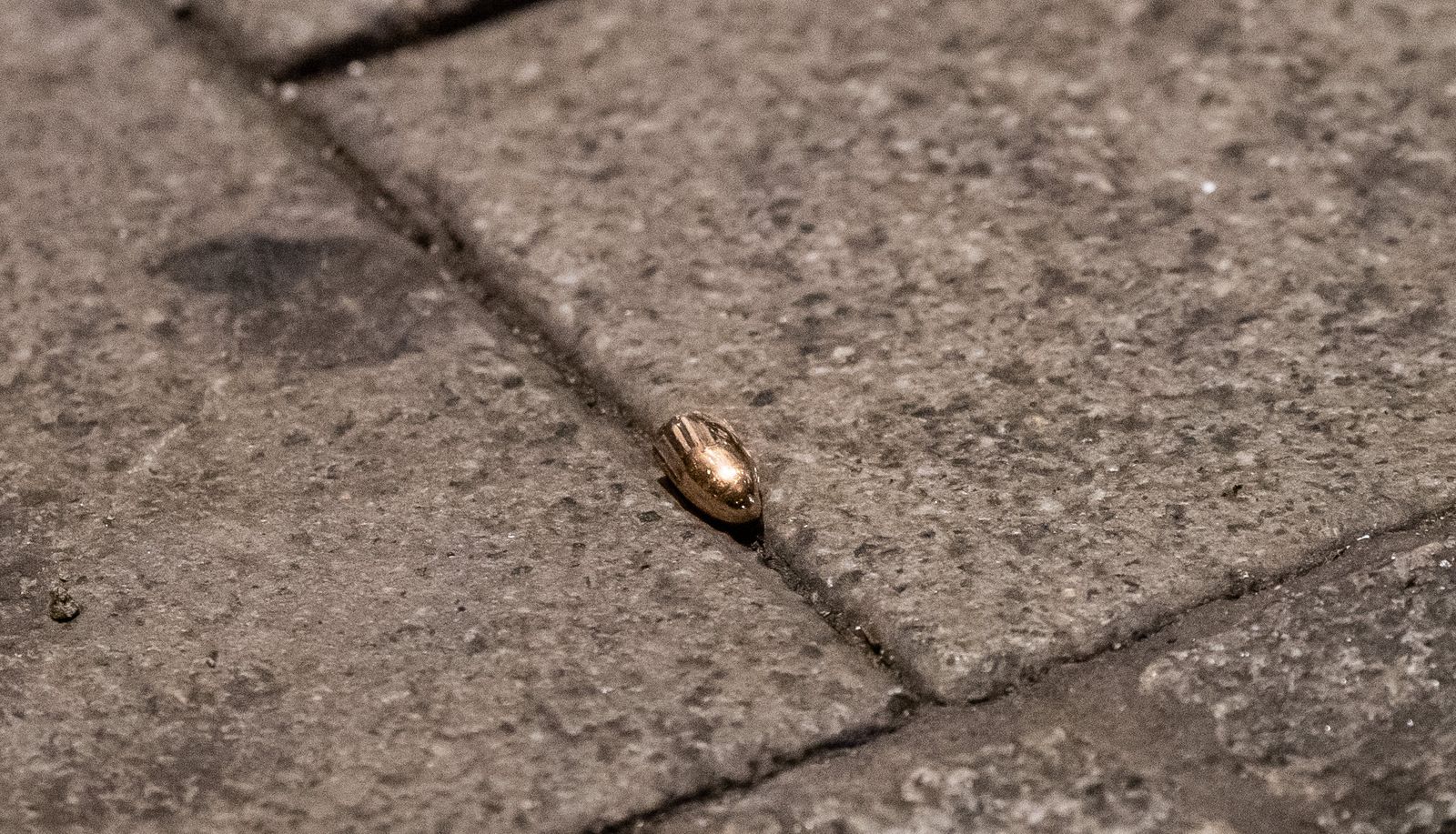 A bullet on the ground at the scene of the crime in Hanau, Germany