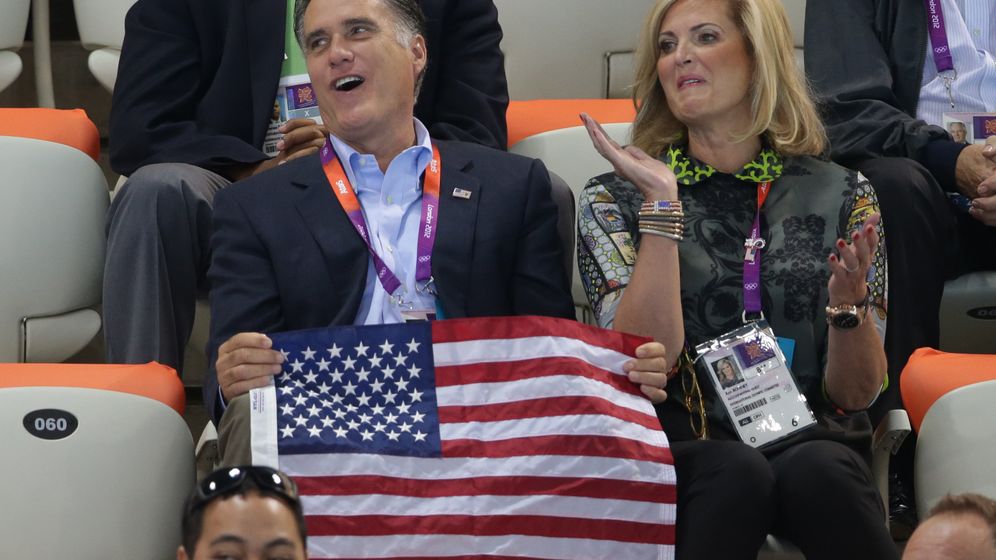 In addition to raising money, the seven-day trip to visit important American allies was supposed to burnish presumed Republican nominee Mitt Romney's foreign policy credentials. He started out last week in London where he met with Prime Minister David Cameron ahead of the Summer Olympics. Over the weekend he went on to Israel where he met with Prime Minister Benjamin Netanyahu.

But so far, Romney's trip has not had the intended effect. In London he drew fire for clumsy gaffes. In an interview on US television Romney called preparations for the games "disconcerting," questioning the adequacy of security personnel and the possible strike by immigration and customs officials. "That obviously is not something which is encouraging," he said.

Though he later praised the Olympics, the damage was already done. London mayor Boris Johnson rebuked the former Massachusetts governor in front of a screaming crowd of about 60,000. To make matters worse, Romney revealed what was supposed to be a secret meeting with the British foreign intelligence agency MI-6 and awkwardly called Labour leader Ed Miliband, "Mr. Leader."

In Jerusalem, Romney received a warmer welcome from Netanyahu -- the two worked together at Boston Consulting Group after they finished business school. In a speech Sunday evening in Jerusalem's Old City, Romney made clear that he supports more American cooperation with Israel. "We recognize Israel's right to defend itself and that it is right for America to stand with you," said Romney, who suggested that he might be open to Israeli military action.

US President Barack Obama has also reiterated Israel's right to defend itself, but has been more cautious, discouraging military action and saying that economic sanctions, including a recent European ban on Iranian oil, should be given time. On Friday he signed a bill that will step up American aid to Israel, also announcing $70 million in funding to help the country advance "Iron Dome," a short-range missile defense system that has already been successful in stopping rocket attacks in places like the Gaza Strip.

Romney sought to distinguish himself from Obama's Middle East policy, calling for a tougher stance on Iran, and saying that the America's "highest national security priority" should be keeping the country from obtaining nuclear weapons.

On Monday, German newspapers criticized Romney's visit to Israel as a shallow effort to win over Jewish voters in the US.

"The first part in London went wrong because Romney bluntly criticized the lack of organization ahead of the Olympic games. It was unfitting for a visitor who hopes to be elected to the White House and invoked a great deal of reaction to the prospect. By contrast, in Israel he was greeted by Prime Minister Netanyahu as a "personal friend of mine and a strong friend of the state of Israel." Romney managed to put Obama on the defensive."

"The Middle East is a weak flank for Obama, who has demanded one-sided concessions from Jerusalem, thus casting a massive shadow on the bilateral relationship. The fight for Jewish voters, who have always tended to vote Democratic, could therefore make sense for the Republicans. ... In practice, however, the essence of [Romney's] political proposals is not that different from the president's: military actions won't be ruled out, but diplomatic solutions are preferred."

"In the end it will come down to this: The economy will decide the presidential election, not strong speeches or awkward appearances in foreign countries."

"Mitt Romney's trip to London, Israel and Poland aimed to sharpen the Republicans' international profile and make an impression on American voters. The interim result: He could (and must) do better. When he tried to give his best in London, his hosts saw it as an unfriendly act. In any case, his Israel visit is even more important to his public back home. With his predictable beliefs about the American-Israeli relationship -- and as an indirect critic of Obama's Middle East policies -- Romney wants to win over Jewish voters, the majority of whom have always belonged to the Democratic Party. But regardless of how stately and diplomatic, or amateurish and clumsy he appears, or how much he talks about the supposed foreign policy errors and failures of the president, who still wears Bin Laden's scalp on his belt, it will have little meaning for the outcome of the November election. The presidential election is a referendum on Obama's domestic policy record. It will be largely decided by the major themes of the economic situation and outlook."

"Travel educates. As a result one should assume that Mitt Romney, the Republican challenger of Barack Obama, wants to learn something during his visit to Israel. Wrong! Almost everything that the candidate organized in Jerusalem fuels the impression that he doesn't want to try understanding how complicated the Middle East situation is. Instead, Romney paints the crisis region in black and white: Israel is good and the rest -- the Palestinians and the mullahs in Iran -- are lumped together."

"This one-sided world view is less dumb than it is coldly calculated. Romney is soliciting campaign donations in Jerusalem (the minimum price for two plates at breakfast is $50,000.) And he is ensnaring Jewish voters at home."

"The trip to Israel may help Romney in the short-term. But in the long-term the Republican has done damage. The Middle East needs the US as a mediator. As such, the presidential hopeful has already disqualified himself." 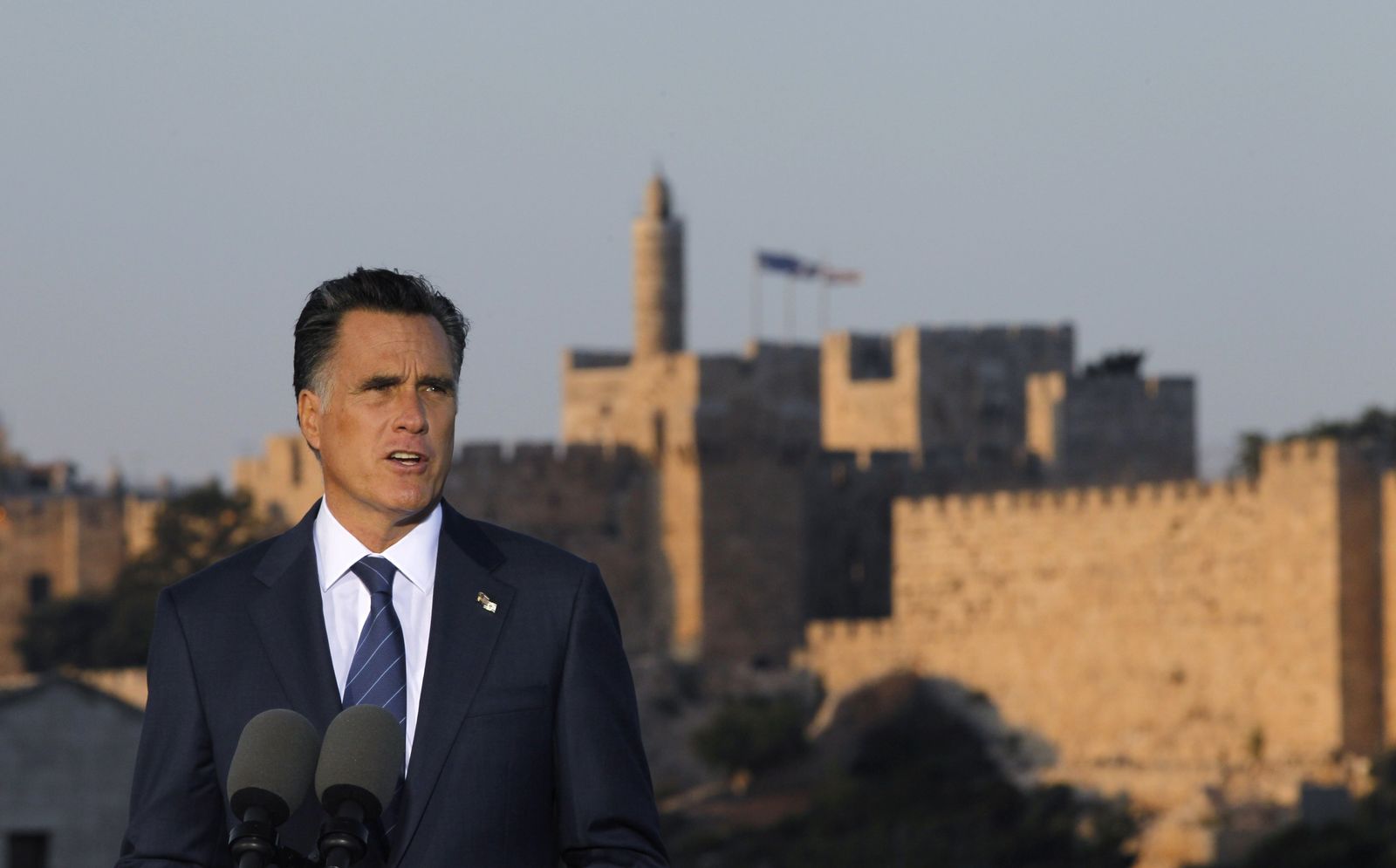 Romney also delivered a speech in Jerusalem's Old City on July 29, making it clear that he supports more US cooperation with Israel. "We recognize Israel's right to defend itself and that it is right for America to stand with you," said Romney, who suggested that he might be open to Israeli military action.