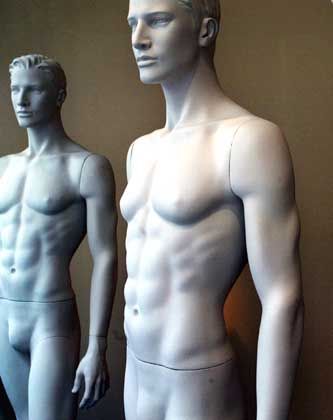 German men may seem almost perfect. But there's always something that just ain't quite right.

For single women visitors, the dating game in Germany can at first seem like a free, gourmet buffet. The men are almost all impressively tall, many are blond and, almost invariably, they are extremely handsome with the bodies of Adonis. Even better, they dress well, smell of expensive eau de Cologne, and theyre intelligent.

Indeed, the first impression is so overwhelming that it almost always leads directly to the first German dating no-no: Expecting that going to a party full of such hunks will yield a catch. In fact, nothing could be further from the truth. German males are not only fine physical specimens, but they're also weak, wimpy, afraid of commitment, and painfully shy. It is perfectly possible for an attractive woman -- who in most countries wouldn't have a second to powder her nose from so much flirting -- to stand in the corner alone at a German party and not be approached a single time. Bottom line: If you want a relationship with a German dude, be prepared to do the heavy lifting yourself.

But before you enter the minefield that is German-men-dating, be sure you know what's awaiting you. The Survival Bible has put together a guide to some common Teutonic types. Our advice: Be careful out there -- there is always a catch.

Daddy was the Kaisers favorite nephew. Mummy was a society beauty. Its just a shame Germany got rid of their royals in 1918. Welcome to the lost world of Germanys redundant aristos. Theyve got no job, no real place in Germany s social democracy but theyre clinging on to their traditional status for dear life. The aristos didnt get anywhere in life by changing their ways, now, did they?

Distinguishing marks: On paper, the little von or zu -- or even more absurdly, both -- tagged onto his last name is a dead giveaway youve met a man of Teutonic Sang Real. Aristo German Male style almost always includes a Thomas Pink shirt, designer jeans and tweed jacket. Keep an eye out for a tendency to shop at Frankonia Jagd or similar huntin-shootin-fishin establishments. He may have an ability to speak boarding school English with a fake Eton accent. While many German men are often six feet tall and blond, Aristos are always six feet tall and blond.

The Pros: If youre English and homesick, Aristo German Male will happily indulge your need to take lots of holidays back to the homeland.

The Catch: Aristo man probably has a vast Schloss somewhere on the Rhine, a place so beautiful you start fantasizing about updating it with expensive Italian furniture. Aristo German Male may even initially encourage your fantasies. But dont be fooled. Aristo German Male doesnt do change. Once he gets you home, all the I-want-to-be-English-just-like-you-my-sweetness business will swiftly come to a screeching halt. You will be forced to eat Leberwurst, meet his 100-year-old granny and walk the family gun dogs -- who, sensing that youre not really posh, will bite you. You will be stranded in a dusty Hell, furnished in Biedermeier kitsch. And when you resist your transition into the Teutonic Upper Class, Aristo German Male will dump you for an Aristo German Female with higher cheekbones.

I never, ever got involved in sport, said Winston Churchill wisely. Not so, Sporty German Male. Oh no, he loves it. Running around Hamburgs Alster when you fancy going shoe shopping, or forcing you to go Nordic Walking on a Sunday morning when youd still rather be under your duvet stuffing yourself with scrambled eggs, Sporty German Male laughs in the face of blubber, Wiener Schnitzel and chips.

My one brief encounter with Sporty German Male included a doomed mini-break to Mallorca. Stretched out by the swimming pool in my bikini, I asked: Do I look fat in this? Sporty German Male looked confused. Of course not, Liebling, he said. If you were fat, my sweetness, you would not be here!"

Distinguishing marks: Adonis-like hairless, perma-tanned body. Over-use of gel in dyed hair with mussed bed-head being particular popular at the moment. Check his wardrobe for pedometers, clothing with Adidas or Puma labels and Nordic Walking Sticks. Should he be into bicycles, note the full-body, neon cycling uniform he dons whenever going out for a spin.

The Pros: Sporty German Males enjoy robust health and look like a 30-something whipper-snappers when theyre really 56. He will also invite you on Kur (Health Spa) holidays at least four times a year.

The Catch: German Health Spa holidays involve getting up early, drinking vile-tasting water and doing aqua aerobics. You will also have to give up chips, full-fat dairy products and red meat for as long as you go out with Sporty German Male.

If you really want to go out with one: Lose weight and get used to Saturday nights drinking orange juice.

Usually in his mid-to-late twenties, the needy German male has generally just been dumped by his first girlfriend with whom he had been together since he hit puberty. Hes lost. Then he realizes the solution: He needs a replacement girlfriend. Fast.

Distinguishing marks: Dressed by his mother. Has a facial expression not dissimilar to a spaniel that has been beaten up one too many times.

Habitat: Needy German male is probably still studying and light years away from getting a proper job (Germans can stretch their university degree courses over a decade). Youre likely therefore, to catch a glimpse of him and his geeky Internet-addicted mates at higher education establishments, grubby clubs and student canteens. Their apartments tend to be chock full of books and CDs with a bicycle propped against the wall next to the couch.

The Pros: He adores you

The Catch:  way too much. Hes needy, a fussy eater and probably has a peanut allergy to boot.

If you really want to date one: Prepare to become mom.

Stop reading Heat magazine! Chuck that copy of The National Enquirer! Intellectual German Male wont be seen dead with you if you dont. Hes spent his entire life cocooned in a university, is fluent in Serbo-Croatian and doesnt own a television. He is one helluva clever German. And hes an intellectual snob.

Favorite Activities: Hiding copies of "The Da Vinci Code" in bookshops. Bitching about the intellectual credentials of anyone who doesnt have at least two doctorates. Watching obscure French films.

Pros: Useful if you have exams coming up.

The Catch: Every time you try and talk to him, hell be too busy reading or having important thoughts." The truth is: Intellectual German Male is probably a misogynist and, frankly, you never had a chance. He only wants to sleep with French women, anyway.

If you really want to date one: Read Proust. ALL of it.

He can say "I Love You" in Russian. But things have gone downhill since 1989. For Ossi German male -- a product of former East Germany -- life was better when the Berlin Wall was still standing, or so they'll tell you. They are fond of saying things like, "The country I come from doesn't exist anymore." What happened to that good old collectivist spirit, eh?

Favorite Activities: Listening to 1980s hard rock and moaning about capitalism, the euro and the fact his rent costs more than 3 pounds a week.

Pros: Good for a history lesson. Or if you want to learn a bit of Russian.

The Catch: See most of above.

If you really want to date one: Start wearing dungarees, now.

My, my, this German male is a healthy guy. Birkenstock-wearing, lentil-eating, Organic German Male is right-on when it comes to global warming, nuclear power and organic gardening. Yawn

Distinguishing marks: Organic German Males usually have big troubled eyes (the planet is dying, you know). He may also have dreadlocks and often wears a scarf even when the sun is shining.

Habitat: Look for Organic German Male in organic supermarkets (by the Tofu) and at anti-fur or anti-America demonstrations. If you like your men "extra green," Extreme Organic German Male will be the one with the megaphone yelling obscenities at the police.

The Catch: Unless you too are a Green Goddess, Organic German Male will drive you crazy with his endless goody-two-shoes rants about global warming. He wont let you have long baths (water waste), or fly long-haul to the Caribbean (air pollution) and will certainly not indulge your need for nice little dresses from Gucci/Prada/Yves San Laurent/Hermes etc. etc., because he says theyre made by Indonesian child slaves.

If you really want to date one: These guys still have a weakness for the daisy-in-the-hair, hippy look.

Distinguishing marks: Unwashed and unshaven. Anarchist German Males often sport pink Mohawks and have chains dangling from their ripped jeans. They are attracted to any clothing made from leather, which they like to sling over their grubby death metal T-shirts.

Pros: None. Unless you are a documentary film maker whos been told to find one.

The Catch: You will never be able to take him home for Thanksgiving, Christmas, birthdays or -- if your family values the cleanliness of their furniture -- even for casual visits. No matter how hard you try, Anarchist German Male does not scrub up well.

If you really want to date one: Just dont.