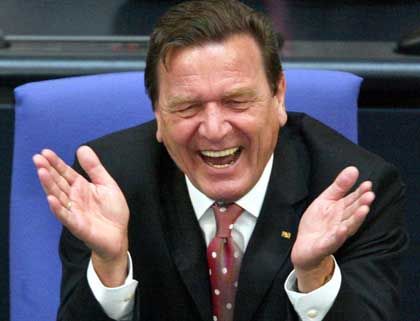 German Chancellor Gerhard Schroeder doesn't have much to laugh about these days. But German papers sure are having fun.

German papers have rarely been so much fun. Every day, they are packed with speculation, mystery and political intrigue. That's because German Chancellor Gerhard Schroeder has turned the normal, orderly process of German political life into a free-for-all. Now everyone is trying to guess what will come next. The biggest question, of course, is will federal elections actually take place on Sept. 18 or not? And if they do, what on earth will be the outcome? Writing in Monday's Financial Times Deutschland, Matthias Machnig, a former Social Democratic executive secretary and business manager, says, "This will be the most unusual election in the history of the republic and will alter the nation's political makeup."

For those just joining the game, here's a quick catch up. Schroeder and his Social Democratic Party were so demoralized and incapacitated by state elections in late May that Schroeder took the odd and shocking step of calling for new federal elections a full year ahead schedule. In order to do so, he went before parliament on Friday and gave a moving speech -- some say the best speech of his career -- explaining why he no longer had the trust of his party and asking parliamentarians to vote yes in a no-confidence vote he himself had called. He then went to the president, Horst Koehler, and asked him to do the legally dubious -- dissolve parliament. Koehler -- who has proven quite a maverick in the 14 months he has held office -- now has until July 22 to decide if he will acquiesce or not. If he does, the German constitutional court will then have a crack at the case and could -- on very legitimate grounds -- reject Schroeder's shenanigans as unconstitutional.

Don't shake your head. Shenanigans is exactly the proper word to describe the games Schroeder is playing. That's because although Schroeder claims he is no longer fit to be Chancellor, he does consider himself in top shape to run for Chancellor again. Head spinning? His point is that as things currently stand in parliament, he does not think he could carry out his program as it stands without getting blocked by the conservative opposition. In the very off-chance he were to win his re-election bid (polls look pretty grim right now) he plans to pretty much pick up where he left off and enact unpopular, but necessary reforms. Of course, his party, which will announce its platform Monday, plans to sugar-coat the burned-plan with some voter candy: more taxes for the rich, tax breaks for families, giving couples a full year of financial support from the government when a child is born, etc. etc.

For Machnig, writing in the FTD, and clearly operating with an SPD bias, the problem is that although voters are disillusioned by Schroeder's seven years in office, they still prefer him over his uncharismatic opponent Angela Merkel of the Christian Democratic Party. Not only is Merkel unproven, but her program, he rightly points out, remains "a black hole." As such, he sees an odd phenomenon occurring which will make for particularly bizarre political theater. "This will be an election of role shifts," he says. On the one hand, there will be "an opposition that in its attitude, style and program has to act like a ruling party in order to gain the trust and belief of the people." On the other, there will be "an incumbent party that goes on the attack and at the same time has to answer questions about the future of the nation."

Both Die Welt and the Sueddeutsche Zeitung focus on Koehler's decision and both predict that he will give in and, indeed, dissolve parliament. A dissolution is not only what Koehler wants, it is what everyone wants, the Sueddeutsche says. "All the parties want to prove they have the support of the people and the alternative (to new elections) would be that a badly lamed government would have to hobble along for another year toward an election date." For Die Welt, Koehler's reasons for giving dissolution the nod are slightly more selfish. "A no-vote would go against his own wishes for Germany -- to get out of the rut of stagnation." Waiting a full year until elections would simply "blind and lame the nation," which has been "paled" by the still unsolved and contentious problem of how to cut back on the nation's generous social benefits, the paper says.

In another editorial -- one that gets top billing on the editorial page -- the Suddeutsche hammers Schroeder and his party's new agenda. If the vote of no-confidence was a "farce," says the paper, then the new SPD platform should be seen as "the post-farce, farce." Not only does the platform not fit Schroeder -- or coincide with his voting record -- but it also doesn't fit the party. And, the paper suggests, nor does Schoeder. "Nothing fits with anything anymore as far as the Social Democrats are concerned," it states. Schroeder, it says, has dug his own grave. "In September," it predicts, "He will lose the election."

The Franfurter Allgemeine Zeitung, too, lambasts the SPD and insists that time is closing in on Schroeder. Naturally, says the paper, "September is still a long way off." But, "vacations have already started and don't end until August. By then it will almost be election day." And until now, it says, Schroeder's speeches have offered nothing new, but "sound the same as the ones from yesterday and the day before yesterday. They are, however, lacking in flesh and blood and are taking the SPD nowhere."

SPIEGEL this week also gives Schroeder little hope, although it does point out how much trouble Merkel is having finding talented people to join her would-be cabinet. And, it does offer some glimmer of redemption for Schroeder, insisting that even if he loses in September, he will still harbor the hope of being remembered as the chancellor who "voluntarily gave up power out of respect for the people." 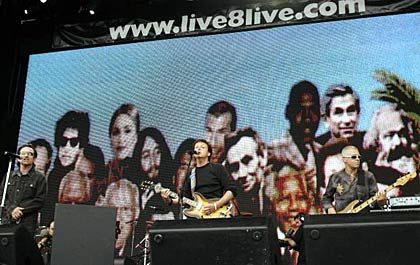 Paul McCartney performs with U2 in London. One question: How many African families could eat for the cost of one pair of Bono's sunglasses?

Meanwhile, the other big topic of ire and praise is Live 8, the set of 10 worldwide concerts organized by musician Bob Geldof to call attention to poverty in Africa ahead of the G-8 summit meetings which start on Wednesday. For the most part, German papers are skeptical of how much real help a pop concert can give to needy African nations. Several insist that going to the concert offered two things people in rich nations like best: an opportunity to feel good about themselves and a good time.

The FAZ even goes so far as to call the phenomenon of mainly white pop stars raising money for Africa a sort of "neo-colonialism." The aim of the organizers, was no doubt good, says the paper, but the question of what should be done long-term remains. "Almost everything has been tried at least once in the last few decades and the results are limited at best."

Writing for SPIEGEL Online, columnist Henryk M. Broder attacks the whole event as meaningless feel-good propaganda. He scoffs at the German campaign of wearing white bands from the day of the concert until Sept. 10 as ridiculous malarkey. "There are 70 days between July 2 and September 10. In that time -- if the 24,000 a day number is accurate -- 1.68 million people will die from hunger and malnourishment, irrespective of what the activists do," he writes. "Whatever they do," he says, "they -- unlike the starving -- for whom they are supposedly acting, will not only have full bellies, but will go to bed with a good conscience, feeling as though they have done something for a world crisis. One could rename the whole exercise, "Bread for the world, but the butter stays here! Or, "The White Band of Idiots." The Suedduetsche concurs, saying Live 8 may have made people aware of Africa again, but it won't help the people there very much. "A similar political interest and feeling of collective solidarity emerged just after the (South Asian) tsunami," the paper says. The real trick, however, is to make lasting change, including involving African leaders in the process. "A clear conscious may be enough to satisfy our instant society," but good development policy is also needed and "can also fail if expectations are whipped up too high."

The left-leaning Die Tageszeitung offers the only defense of the event and its organizers. "Sure, there is a lot to criticize with Live 8 and the personal cult of (organizer) Bob Geldof," it admits. "There is the self-aggrandizing of musicians who usually make more in one appearance than a normal African earns in a lifetime." Likewise, it says, there is something troubling about "eight men in a room (the G-8 summit) on whom the future of the world depends." Yet, still, the paper insists, "it is still a success without precedent when 2 million people go to concerts and half the world's population is tuned in."