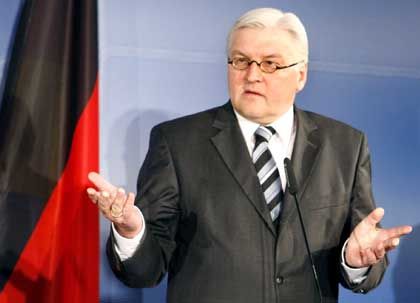 It wasn't supposed to happen this way. After years of trans-Atlantic tension, Germany's new government under Chancellor Angela Merkel wanted to make a fresh start in US-German relations. It's no secret that former chancellor Gerhard Schröder and US President George Bush cared little for one another. But many on both sides of the Atlantic were hoping the past discord over the war in Iraq would be left in the past as Merkel has said she would make good ties with Washington a priority of her government.

Foreign Minister Frank-Walter Steinmeier's early visit to Washington was to underscore the importance to Germany of improved relations with America. But the ongoing reports of CIA flights across Europe carrying suspected terrorist to unknown locations where they might be subjected to torture, are threatening to derail the plans for a US-German lovefest. Steinmeier has said he will ask for clarification from his American colleagues about what exactly the US intelligence agency is up to. German commentators believe the issues could cast a pall over what was expected to be a more harmonious visit.

The business daily Handelsblatt devotes half a page to Steinmeier's trip to the United States and the issues surrounding it.  The paper quotes US officials being pleased that he is traveling to America so soon after taking over the Foreign Ministry. But in an editorial a commentator makes clear that not everything between Washington and Berlin will now be hunky-dory. "Everything was meant to be harmonious. And now Steinmeier's visit is being overshadowed by the reports about CIA flights," writes the paper, adding that the old burdens of America's war on terror is threatening to disturb the rapprochement between the United States and Germany. "The Americans have to finally realize that the long-term existence of camps like Guantanamo are a disgrace for a democracy and they do more harm than good in the fight against terror," the editorialist opines. But the Germans will also have to give up their disingenuous naivety regarding intelligence services and always sticking to the letter of the law completely.

The conservative Frankfurter Allgemeine Zeitung believes the onus is on the Americans to make Steinmeier's trip into a true chance for a new beginning. "In light of reports about CIA prisons in Europe and rumors of torture, the US government now has an opportunity to straighten out a few things. It would be an act of wisdom to use the visit by the new German foreign minister to do so," writes the paper, adding there could be no better way to make a convincing expression of Washington's will for a new start. "The Bush administration has unnecessarily maneuvered itself into a position in which it can only lose. In light of the difficult situation in Iraq -- to put it mildly -- Washington needs its friends more than ever." The paper writes that only if this realization sinks in on both sides of the Atlantic, will the alliance have a genuine chance to get back on track.

The center-left Süddeutsche Zeitung from Munich devotes much of its front page to the issue. "CIA Affair Weighs on Seinmeier's USA Trip," reads the daily's top headline. In an editorial, the paper remarks on how surprisingly timid the new German government is being about the reports of secret CIA prisons and torture in Europe. "Other EU governments are more self-confident and loyal to their principles. Merkel and Steinmeier are vacillating," writes the paper, admitting that Berlin is in a tough spot. The new German government must convince the public of the value of a partnership with the United States while also proving to Washington that cooperation with Germany still has a special importance. "The Bush government is hoping that Germany will show leadership in Europe. But the Germans, caught in their own malaise, can never do that alone," opines the paper, explaining that first Berlin needs to have the support of its European partners. "Criticism on the CIA camps, expressed as European concern and without Teutonic admonishment would not hurt either in Brussels or Washington."

Berlin's centrist daily Der Tagesspiegel addresses the potential conflict between Chancellor Merkel and Foreign Minister Steinmeier -- who was a key aide to Schröder -- on important policy issues, including ties with Washington. "What everyone wants to know is, how much Schröder is there in Steinmeier, and how much Merkel?" asks the paper, adding that Steinmeier does not appear to be going to Washington with clear instructions from Berlin. Der Tagesspiegel points out that the foreign policy tensions between Merkel's conservative Christian Democrats and the center-left Social Democrats (SPD) of Steinmeier and Schröder have not been resolved by the coalition treaty -- merely averted. The SPD, which under Schröder strongly opposed the US-led war in Iraq, expects Steinmeier to stick with the "peace policies" of the previous administration that were so popular with the German people. "Merkel wants to work more closely with the USA [but] there are limits as to how much the chancellor can newly define foreign policy: she cannot risk a conflict with her coalition partner the SPD or the public."